NEW YORK – The National Basketball Association (NBA) today unveiled its lineup of newly designed NBA All-Star trophies in celebration of the league’s 75th Anniversary Season.  Designed in partnership with artist Victor Solomon, the trophies will be presented for the first time during NBA All-Star 2022 in Cleveland.  The lineup of hardware is headlined by The Kobe Bryant Trophy, which will be awarded to the Kia NBA All-Star Game MVP on Sunday, Feb. 20 at 8 p.m. ET on TNT.

“As the NBA celebrates its 75th Anniversary Season, this collection of All-Star trophies represents the continued growth and evolution of our game,” said Christopher Arena, Head of On-Court and Brand Partnerships at the NBA.  “Through our collaboration with Victor Solomon, these trophies incorporate deep storytelling, reimagining our previous All-Star trophies in a modern aesthetic, and now serve as the new standards of excellence that future generations of All-Stars will strive to reach each year.”

Solomon’s work in this space includes his “Literally Balling” project, where he explores the icons and symbols of basketball as a platform for conceptual storytelling.  His art has detailed the high process techniques involved in creating and designing stained glass basketball backboards, crystal basketballs and cast ceramic basketballs reconstructed with a Kintsugi process, and has been exhibited in New York, Los Angeles, Paris and Shanghai.

“For the past few years, the NBA and I have proudly and tirelessly worked to reconsider what a trophy is, has been and could be,” said Victor Solomon. “Redesigning the All-Star trophies gave us a special opportunity to create event awards worthy of the energy and excitement the moment creates, while introducing the full collection’s visual, aesthetic language. The occasion also gave us the privilege and responsibility to develop an entirely new silhouette worthy of being named ‘The Kobe Bryant Trophy’ for the Kia NBA All-Star MVP for which, in the spirit of its namesake, we threw out all conventions and challenged ourselves to reorient how we thought about ‘the game.’”

TNT will unveil the All-Star Game reserves (seven players from each conference), as selected by NBA head coaches, and showcase the new NBA All-Star trophies tonight at 7 p.m. ET on TNT NBA Tip-Off presented by CarMax.

Commemorating the league’s most notable achievements at NBA All-Star, each trophy boasts an elevated design, fit with intricate elements symbolizing the milestone that each award represents.  The NBA All-Star trophies include: 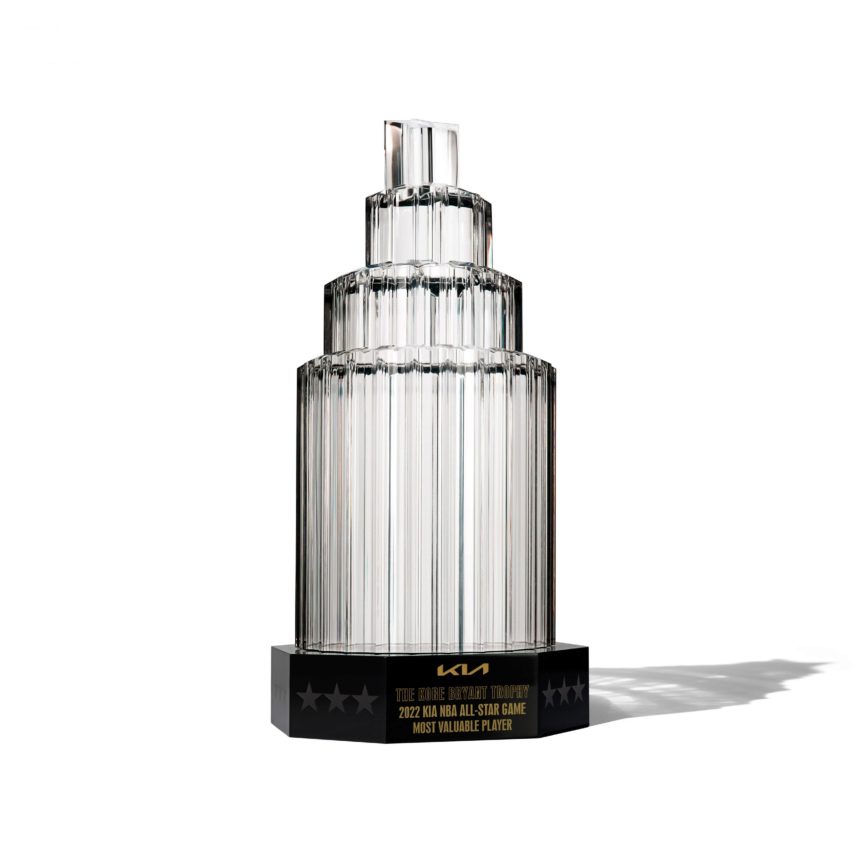 The new Kobe Bryant Trophy further celebrates its namesake, with intricate details holding dual meanings, both for NBA All-Star and Bryant’s legendary career, which include the following:

In addition to The Kobe Bryant Trophy, the following NBA All-Star events will crown their respective champion or MVP with a newly designed trophy:

These trophies take inspiration from the gold-basketball All-Star trophies that had been previously awarded to the event champions, infusing nostalgia from the past trophies and spinning them forward with a new, innovative approach.

In addition to The Kobe Bryant Trophy, the following NBA All-Star events will crown their respective champion or MVP with a newly designed trophy:

Each trophy is composed of the following:

As is custom since 1983, NBA All-Star rings are awarded to players in recognition of their selection to the game.

NBA All-Star Game Rings: As is custom since 1983, NBA All-Star rings are awarded to players in recognition of their selection to the game.

Design details of the latest rings include:

The winning team of the Clorox Rising Stars will receive medals that are elevated by basketball seams, with “Champions” and stars engraved in the center.  In addition, two players from each Rising Stars team will compete in the Clorox Clutch Challenge, with the winning team set to receive a 10-inch crystal disc.

The Ruffles NBA All-Star Celebrity Game will award an MVP trophy fit for the game that features stars across film, television, music, sports and more.  The trophy will consist of the following: