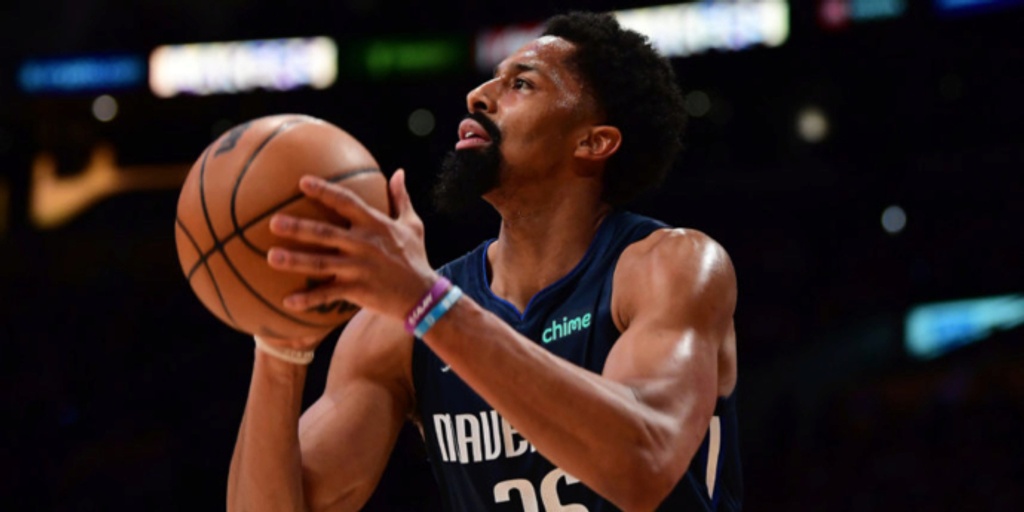 Spencer Dinwiddie thriving with Mavs after messy exit from Wizards

Prior to last month’s NBA trade deadline, the Dallas Mavericks and Washington Wizards pulled off arguably the most surprising deal of the week, swapping Kristaps Porzingis for Spencer Dinwiddie and Davis Bertans.

Porzingis hadn’t been mentioned in any trade rumors leading up to the deadline, so it was shocking to see the 26-year-old former All-Star on the move.

Dinwiddie, on the other hand, was very clearly on the block. Multiple reports suggested that he was available, and Kevin O’Connor of The Ringer wrote that Dinwiddie’s “teammates don’t want him there.” The 28-year-old guard even spoke out about how his vocal leadership “wasn’t necessarily welcomed" in the Wizards' locker room.

It was a surprising turn of events. Just a few months earlier, Bradley Beal made it clear to the Wizards’ front office that he wanted Dinwiddie and even helped recruit him, as general manager Tommy Sheppard has discussed. This played a significant role in Dinwiddie signing a three-year, $62 million contract with Washington.

The Wizards ultimately traded Dinwiddie, Bertans and Montrezl Harrell. Shortly after, Kentavious Caldwell-Pope attributed the team’s pre-deadline struggles to “agendas and egos,” adding that players “were complaining about minutes [and] not getting the ball.”

Dinwiddie was understandably bothered by these reports and comments, which insinuated that he was disliked and causing problems in the Wizards’ locker room.

“I think that’s what hurt the most. I’ve never bashed Washington. I’ve never said an ill thing about the team," Dinwiddie told reporters. "I thanked the owner, Ted [Leonsis]. I thanked Tommy Sheppard, the GM, for collectively deciding to give me my contract. They didn’t have to pay somebody coming off an ACL [injury]. I appreciate that. Wes [Unseld Jr.], being a first-time head coach, has a wealth of basketball knowledge. So to be bashed on the way out the door hurt my feelings, for sure. I’m human, of course.

“And you got to remember: When we were [10-3] and everybody was going crazy and we had all those clutch games, I was the one hitting the game-winners. Look at the Indiana game, the two Boston games, I was the one doing that. And that was back when I wasn’t playing back-to-backs. When the role changed and they wanted me to pass more, they thought I was scoring a lot, I did that. I took my foot off the gas for a while because that’s what they felt the team needed. So to get kind of kicked out the door was a wild feeling. I hadn’t really experienced that before. But I still have nothing ill to say other than, yes, it hurt my feelings. But like anything else, you become cautious. And so far it’s a great fit [in Dallas]. I love what they ask me to do here, which is get in the paint, and I’m going to continue to do that and try to be of service.”

Dinwiddie has been thriving with the Mavericks through seven games, averaging 17.6 points, 5.1 assists, 2.3 rebounds, 1.7 threes and just 1.4 turnovers, while shooting 56.3% from the field and 41.4% from three-point range. And in his first start with Dallas, Dinwiddie contributed a season-high 36 points to go along with 7 assists and 2 rebounds in a 114-113 win over the Sacramento Kings.

Spencer Dinwiddie was balling for @dallasmavs dropping 36 PTS while shooting 50% from the field in the comeback victory! #MFFL@SDinwiddie_25: 36 PTS (11/22 FGM), 7 AST pic.twitter.com/lvgltC2xTS

The Mavericks have won six of seven games with Dinwiddie in the lineup.

“I knew I had a couple of friends here in [Reggie] Bullock, Theo [Pinson] and JD (Jared Dudley) on the coaching staff. You still approach the situation with kiddie gloves to see what’s going on,” Dinwiddie said of his fit with the Mavericks. “Everything they said to me so far has been authentic, and everybody has bought into doing what they need to do to win. They encouraged me to be aggressive.

“I missed my first three layups [against the Kings] and I felt like those were good shots. They aren’t mad. It’s not like Bullock and Doe-Doe (Dorian Finney-Smith) are like, ‘Man, why am I not shooting? Like, what are you doing?’ They’re like, ‘No, bro, if you get another layup, shoot it! Until they stop you, if you can keep getting layups I don’t care if you missed 20 of them, we believe in you to be aggressive.’ That’s the culture of the group, and I’m going to stay in attack mode.”

Pinson has helped his former Brooklyn Nets teammate get acclimated in Dallas.

“Theo is the best hype man, culture guy, whatever you want to call it, in the NBA,” Dinwiddie said. “I’ve been in the NBA eight years — I’ve been on like five teams or something like that — Theo is the best. I’ll take him on a team any day. The mood is instantly lighter. It’s instantly better. You going through some tough times? He’s going to make you laugh. You going through some good times? He’s going to make you feel great… I’ll take him on my team any day. I promise you that.”

Dinwiddie seems excited about his future in Dallas. He's meshing with his teammates, and he appreciates that everyone knows their role.

“I just think our commitment to the collective and to winning games is all that matters,” Dinwiddie said. “You’re not going to catch me out here picking up De’Aaron Fox 94 feet; that would be out of character. I’m not a ball-pressure guard. I’ll sit there and guard you 1-on-1, but it’s not my role and I’m not going to do that. My job on offense is to get in the paint and make plays. I’ll shoot the three when I have the switch and when I’m open, but I’m not just casting 30-footers like I’m Steph Curry. I do what I do, and I don’t do what I’m not supposed to do. That goes 1 through 15. Everybody here follows that type of mentality because we understand that to not just win basketball games in the regular season, but in the playoffs, you need that.”

It certainly seems like this change of scenery has been beneficial for Dinwiddie. Not only is he succeeding individually, but he’ll also get to return to the playoffs (barring a collapse) since the Mavs are 39-25 and currently stand as the Western Conference's fifth seed.