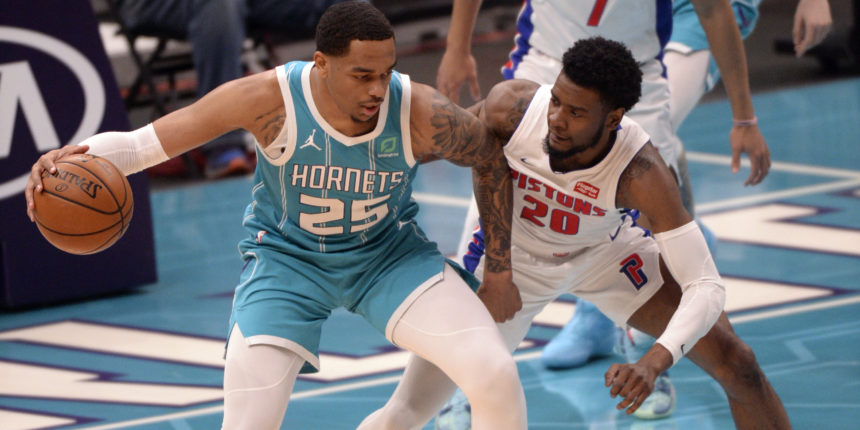 Something To Prove: PJ Washington at center

The Charlotte Hornets identified the center position as their focus area this offseason.

They traded for Mason Plumlee, a solid rim roller and passing hub from the high post. They let longtime — and long-underrated — big man Cody Zeller go in free agency; he's off to Portland to screen for, and catch lobs from, Damian Lillard. Charlotte locker room favorite Bismack Biyombo is also out.

In the draft, the Hornets took a long-term swing on super-athlete Kai Jones. He's ridiculously explosive with unreal physical traits, but is likely a year or two away from being a positive impact guy. He joins Vernon Carey Jr. and Nick Richards in the Hornets' young stable of centers we're not quite sure what to expect from.

But what if the answer to the center question isn't a traditional center? What if it's third-year forward PJ Washington?

After rarely playing center in his rookie campaign, Washington nearly split his time between the 4 and 5 last season: a 54/46 split; let the good folks at Basketball-Reference tell it. The Hornets had a plus-3 net rating in nearly 900 minutes when Washington was on the floor without a center, per PBP Stats.

That's a pretty solid sample of positive minutes. It's even more impressive considering the up-and-down nature of Washington's season, at least from a shooting perspective.

The Hornets aren't in "prove it" territory as a whole; they're a young group that caught a lot of teams off guard last season with their breakneck pace and funky mixture of defensive coverages. It is fair, however, to say that the surprise element likely won't exist for them this year.

With the team's core being as young as it is, there is room for linear improvement, and thus another year of playoff contention. But because the shine has worn off a bit, and because the rest of the conference has improved, they'll need a step forward from their core to keep pace.

That may start with Washington.

I won't bore you by completely quoting myself from the Jaren Jackson Jr. piece, but the same "All Unicorn bigs are not created equal" point remains. Washington isn't a unicorn, but his skill set is robust enough to make you raise your eyebrow when watching him.

Like Jackson, the intrigue begins from the outside with Washington. He got off to a slow shooting start last season (roughly 33% from deep over his first 24 games), then completely turned it around to close things out (nearly 41% on 5.3 attempts).

He doesn't possess Unicorn-like shot versatility, at least not yet. Washington only made four (4) threes coming off screens last season, per InStat tracking, and those were of the "receive a random pin-in and spot-up behind it" variety.

He does knock down spot-up looks with ease, and displays solid footwork on pick-and-pops. The foundation is there for him to do more movement stuff, and I'm intrigued by some of the self-created threes he took last season.

That doesn't look like someone that can't get busy, that's for sure.

Teams can't afford to leave him open from deep. He invites aggressive close-outs on spot-up and pick-and-pop opportunities, then counters them with quick drives.

The best thing to say about Washington right now on that front is that he's a quick decision-maker off the catch. He's firing the shot, or immediately branching into a drive to keep the chain moving. For a Charlotte team that doesn't have a title-level number one option, maximizing windows with timeliness is key.

As a finisher, Washington has a solid feel for defender positioning. He attacks scrambling defenders well, pinpointing their front foot and sliding past with aggressive drives. He's a low driver, able to gain inside leverage with his shoulders to create some semblance of space. Counters are being added — he's gaining comfort with a spin move — but he's not all the way there yet.

His passing chops are also trending upward, particularly on drives. His pass percentage on drives jumped nearly five percentage points from last season (34.6 to 39.0), while his turnover rate rose marginally (7.9 to 9.5), per Second Spectrum tracking data. The path from chain-mover to playmaker is there.

A big man that can legitimately shoot the ball while possessing the ball skills to get downhill and create for himself or others... that's a hard needle to thread. The guys that can do that have, or will, get paid handsomely.

The fact that Washington can provide plus-impact at the 5 while some of his skills are still unrefined (more on that shortly) bodes well for him and the Hornets as a whole.

While it's perfectly okay that a big man on his rookie deal doesn't have it all together, it is important to note that Washington isn't there yet.

There are areas of refinement, like Washington's passing, where you squint but still feel okay about things overall. He's a quick decision-maker and generally makes the right reads. After going through his film, I struggle with calling him a good passer because the ball placement just isn't there.

The stationary stuff is fine. Once you incorporate movement — drive and kicks, or short-roll opportunities — the bag becomes a bit mixed. His tape is littered with high and/or wide dishes that take shooters out of rhythm. While it's nice to (quickly) identify a window, you ultimately have to hit the sucker. He doesn't do that enough right now.

The more pressing issue is Washington on the interior, on both ends of the floor.

Offensively, a lack of vertical pop hinders him quite a bit as a finisher. Among 97 players to take at least 200 shots at the rim last season, Washington ranked 93rd in field goal percentage (54.6%) and 95th in the percentage of rim attempts he had blocked (15.8%), per PBP Stats.

It's great that he understands how he has to win: with positioning, with craft and with a little bit of touch. It's a bit concerning that he needs those traits to the degree he does. If he isn't able to win a pure scramble drill, his attempts become infinitely more difficult.

On the other end of the floor, Washington doesn't bring enough punch to operate as the primary big. Lateral mobility is his greatest strength defensively. It's necessary considering how often the Hornets switched last year, and how much ground he occasionally had to cover when they went to their many variations of zone.

He can legitimately hold his own against forwards and wings, and survive against sub-elite guards in a pinch. As a weak-side rotator, Washington is generally on time and on target.

Put Washington in a drop as the primary defender, and you'll see inconsistencies in his technique and depth, and the lack of vertical pop will rear its ugly head.

Jokic is probably the closest analog, oddly enough: a big man with squishy traits as a rim protector who makes up for it with activity. Both are high-steal guys for the position, but Jokic can also clean the glass at a high level (26.1% defensive rebound rate last season). Washington lags behind in that area (18.3%).

There is context to be added to both of those numbers. Washington has his flaws as a defender, but he was also tasked with covering for some of the worst point-of-attack defense in the league. There's a reason the Hornets experimented as much as they did defensively last season.

It's also difficult to post a high rebound rate when defending on the perimeter as much as Washington had to, and baked into all of this is that Washington split time between the 4 and 5 to begin with.

But if he's to log more minutes at the 5 specifically, he has to become a stronger presence inside. He isn't a bad defender on balance, but there's a step that needs to be taken.

If he's able to get there defensively, his offensive strengths will be accentuated. His shooting becomes even more deadly when he's removing a center from the paint. Driving lanes will become wider, opening more passing opportunities.

The Hornets only got 53 minutes out of the Ball-Rozier-Hayward-Bridges-Washington lineup last season; considering it was a positive (plus-5.4), it's certainly worth exploring as a closing lineup this year. Washington being able to man the middle would allow that to happen.

Beyond the team success, Washington will be extension-eligible next offseason. A strong showing on both ends could wind up being fruitful for him.

What if the Los Angles Lakers didn't trade for Russell Westbrook?
44 min