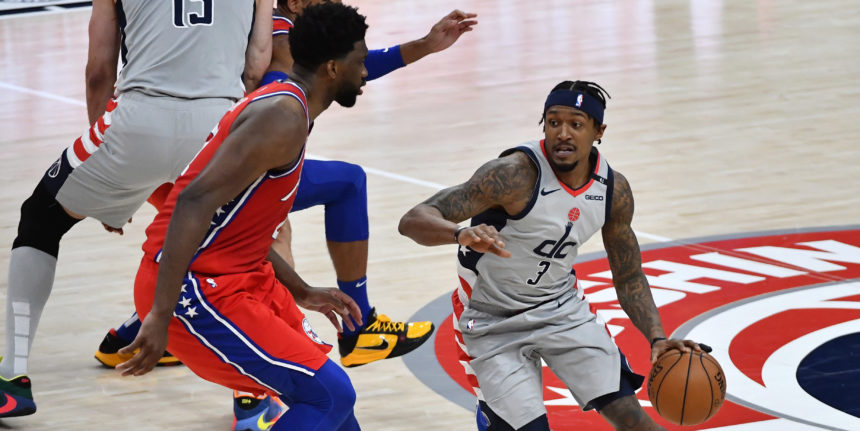 Sheridan: Putting my money where my mouth is with playoff bet

Somebody at DraftKings SportsBook did not love the wager that was being attempted from the parking lot of a Dairy Queen: $20 on a seven-way parlay with the correct series score of seven NBA first-round playoff series.

This happened on Saturday morning during the short window when it was unclear whether LeBron James would be eligible for the Los Angeles Lakers because of a COVID-protocol violation.

The bet slip said: Nets in 4; Heat in 7; Blazers in 7; Mavericks in 7; Jazz in 5; Knicks in 5 and Wizards in 7. A message popped up on this writer’s phone: Please wait while this bet is manually reviewed.

One car wash later, it was only partially accepted despite the odds of better than 6 million to one.

Hey, if you are going to make playoff predictions in this day and age, you may as well back them with an Andrew Jackson to keep things fun… if possible. Despite the small size of the bet, if this one hits, I’ll be writing a column following the playoffs entitled “Where I Intend To Take My New Yacht After Covering The Olympics.”

The picks are gut shots, and there is reasoning behind all of them… along with a Lakers-Suns prediction now that we know King James will be in uniform on Sunday:

Nets over Celtics in 4. Over the course of the season, Brooklyn gained James Harden, Blake Griffin and Alize Johnson among others. The Celtics lost Jaylen Brown late in the regular season, after losing Gordon Hayward, Al Horford and Kyrie Irving over the past couple of seasons without getting much of anything in return. None of these games should be close, and Kyrie should be especially pumped against his most-recent former team. The Nets should rediscover their autopilot switch.

Heat over Bucks in 7. As big of an improvement as Jrue Holiday is over Eric Bledsoe, this one will come down to which team is better from three-point range and the proper adjustments from game to game, along with whether Giannis Antetokounmpo can make his free throws when it matters. Until proven otherwise, Miami has Milwaukee’s number. Didn’t we all learn that a year ago? The Heat remain a sleeping giant.

Trail Blazers over Nuggets in 7: The best series that nobody is talking about, but certainly will be. The 3-6 series in the West features the two best-but-least-sexy teams in the entire conference, and it is sort of a shame that we are going to lose one of them. And as good as Nikola Jokic is, the Blazers have added a couple of key pieces in Robert Covington, Enes Kanter and Norman Powell over the last year. They were not on national TV much aside from Damian Lillard’s many commercials, yet they are only two seasons removed from being a Western Conference finalist with many of the same main components.

Mavericks over Clippers in 7: The karma police are going to hand it to the Clippers in Game 7 because of their tank job in the final game of the regular season against the Thunder, preventing OKC from finishing in a tie for third-worst in the NBA that would’ve left them a coin flip away from winning the draft lottery and getting the No. 1 overall pick. This one should be just about as entertaining as Blazers-Nuggets, and it comes down to who will be the big-time player at the end of these games. We already know that Luka Doncic and Kawhi Leonard are equally capable of hitting monster last-second shots.

Jazz over Grizzlies in 5. You gotta hand it to Memphis for getting the overtime win on the road in Steph Curry’s place, capping an entertaining play-in week that helped make up for a less-than-ideal regular season from a competitiveness standpoint. Taylor Jenkins appears capable of scheming one victory against a far better opponent, but Utah’s three-point shooting, experience and chemistry are going to be exceptionally difficult for anyone to overcome. They are a very worthy and dangerous No. 1 seed. Dwyane Wade should be pleased with himself for buying in.

Knicks over Hawks in 5: It is easy to be swayed by New York’s sweep of the three-game season series, especially given how unstoppable Julius Randle was against Atlanta. But the Hawks have spent a season battling through injuries and developing chemistry with so many new additions to the roster, and it is hard to imagine De’Andre Hunter, Clint Capela and Bogdan Bogdanovic getting swept when they get the check marks for matchup advantages at their respective positions. But the Knicks have the best record in the entire NBA since April 7, and they are aligned with Thibs’ defensive philosophies.

Wizards over Sixers in 7. Have we not seen Joel Embiid and/or Ben Simmons botch these situations before? Or Russell Westbrook bounce back and prove himself to be the best player on the court in a good two-third of the games he has played this season? Look, anybody who surpasses Oscar Robertson in the record books deserves a higher level of respect than is being given to Westbrook, who has had success under Scott Brooks before. It is a big deal for Bradley Beal’s hamstring recovery that these teams will play only twice before next weekend. Upset special.

Lakers over Suns in 6. It would not surprise me if this series ends in less than 6 games, especially if Andre Drummond plays almost no role and the Lakers let Anthony Davis dominate the center position. Drummond will be needed at some point, but not in this matchup. And you never, ever, ever pick against LeBron James (unless he is flanked by J.R. Smith).