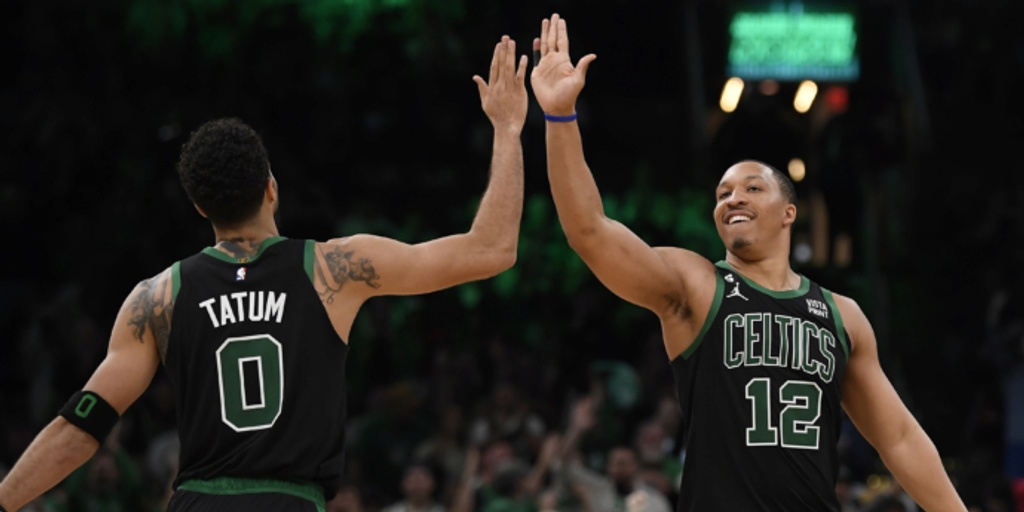 *All stats are through games played between November 5 and November 11, unless noted otherwise.*

BIG OF THE WEEK: GRANT WILLIAMS

This man's getting paid.

Grant Williams is in the midst of a career-year, averaging highs in virtually every category. His on-court overview consists of ridiculous efficiency from deep (50% on 3.1 attempts), added juice and craft as a driver, some short-roll playmaking, and stout defense across multiple positions.

What I've really enjoyed as of late are his cinderblock screens. He's valuable off the ball, as part of sets — think of the Celtics' pindown kink — or more improv looks. Not many players in the league point harder than he does when he's setting up a flare or a pin-in screen.

On the ball, you really get an idea of his value. He's sturdy enough to move players, dutiful enough to hold and force mismatches for his stars, and timely enough to create the aforementioned short-roll situations by getting out of his screen early. He just gets it.

Possessions featuring a Williams on-ball screen generated a ridiculous 1.38 points per possession (PPP) this week, per Second Spectrum. The off-ball screen possessions weren't at that level, but they were plenty fruitful (1.15 PPP).

SMALL OF THE WEEK: REGGIE JACKSON

When you think of Reggie Jackson, you typically think of bucket-getting — or baseball, or tossing a hat up in the air while dancing. Ignore that last one.

Something that's popped this week has been his screening, particuarly his partnership with Paul George. Normally, Terrance Mann soaks up the guard-screening reps; he leads all non-frontcourt Clippers in on-ball picks (51) this season, 15 more than Jackson (36).

But Jackson has gotten more into the mix as of late. He set 18 this week, with 16 of those being for George. It hasn't just been the hug-and-hold variety to force a mismatch either; Jackson's getting busy, and his 77.8% contact rate this week proves it!

If you're getting this kind of buy-in, the positives are easy to see. Jackson doesn't have to create from a standstill, and he gets to make easier reads against scrambling defenses.

The Clippers blazed the nets (1.27 PPP) on trips featuring a George-Jackson ball screen this week. We've seen 29 hookups between the two this season, which puts them on pace to obliterate their volume from last year (59). I'm here for the sample growing.

YOU SHOULD HAVE THE FACILITIES FOR THIS, BIG MAN: ISAIAH STEWART

Parsing through the season Isaiah Stewart is having would take an entire article. That can extend to the Pistons at large, honestly.

One thing that has annoyed me a bit has been Stewart's screening chops. Watching him when the Pistons want to run Veer action — a big setting an on-ball screen before swinging to the corner to set a pindown — has been infuriating in a basketball sense. The timing is weird; his timing and angles have been weird.

Aside from the actual screening, it doesn't feel like his roll angles have been great — at least not recently. He's flipping and rolling in a straight line without really stressing the big or giving his ball-handler — often Cade Cunningham — much of a pocket to fit a pass into.

Stewart made contact at a decent rate this week (62.2% contact rate), but he's down a good bit from last year's overall mark (69%). There seem to be a combination of little things holding him back from being an effective screening partner right now. Hopefully, corrections are made soon.

WE SEE YOU TOO: JULIUS RANDLE

If you're not a fan of the New York Knicks, Julius Randle is honestly pretty funny to watch off the ball. That man simply isn't interested if he's not directly involved in an action. Of course, that's not exclusive to him; I just wrote something similar about Giannis Antetokounmpo last week. But like the Giannis point, all I'm asking is for him to sell it a little bit.

It doesn't have to be a chore, man.