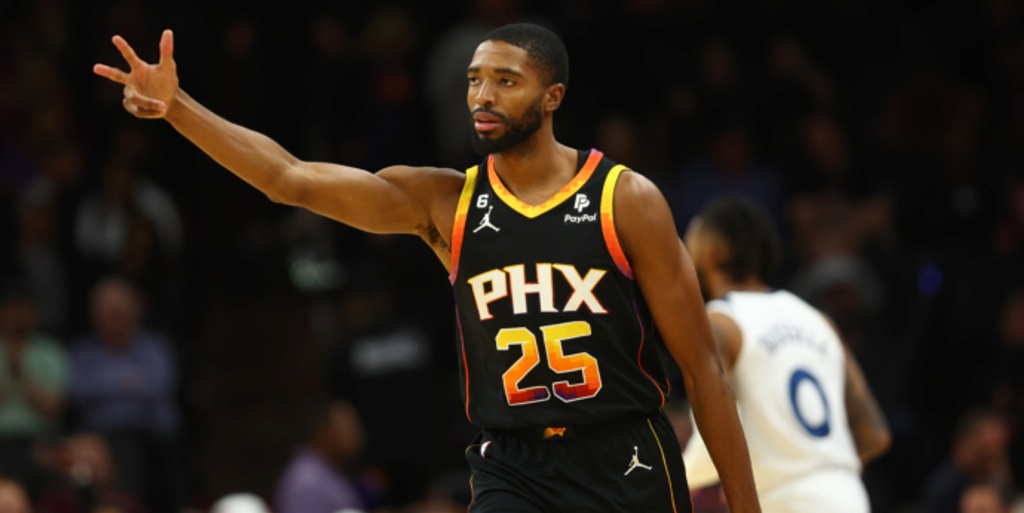 Let’s get into volume two.

*All stats are through games played between October 30 and November 4, unless noted otherwise.*

BIG OF THE WEEK: DWIGHT POWELL

Dwight Powell, or "DP" (we're still consulting with the judges), is once again flying under the radar. Part of it is his visibility; he logged just seven minutes in the Mavericks' first four games, including three DNPs. That's gone up as of late, with him playing a season-high 26 minutes during Friday night's win over the Toronto Raptors.

The most substantial part of his (lack of) status is what he's tasked with doing. Screen hard, roll hard and stay solid within whatever the defensive scheme calls for him to do. He isn't fed post touches, doesn't offer much as a stretch option and doesn't even have the "hey, he's a post hub sometimes!" tag going for him.

And yet, the Mavs have won his minutes in every game he's appeared in. Spencer Dinwiddie gave Powell all of the flowers following a three-point win over the Utah Jazz.

Dinwiddie talks about Powell's work ethic and character. He digs into the value of Powell's rolls, and how his consistency in that area forces the big and weak side defenders into tough positions, creating opportunities for himself and Luka Doncic.

I'd like to add that, in addition to the forcefulness of Powell's rolls, he does his homework early by setting effective screens. He angles his body in a way to consistently hit a defender's hip; that puts them behind the play — and on the hip of Doncic or Dinwiddie — which further stresses out the defense. If you're allowing Doncic or Dinwiddie to lead the dance, you're in trouble.

To that point: the Mavs generated 1.36 points per possession (PPP) on trips featuring a Powell on-ball screen, the fourth-best mark in the NBA this week among 73 players to set at least 25 picks, per Second Spectrum. Powell created contact on nearly 82% of those picks, a rate trailing only Bulls forward Patrick Williams (92.86) in the same span.

Keep up the good work.

We're adding a category, because this is my thing and I do what I want.

In all seriousness, it felt weid to consider Bridges for "Small of the Week" considering he isn't a guard, but he obviously isn't a big either. This is a healthy middle ground for the two-way wing. I've really enjoyed his work as a screener thus far.

Dating back to last season, Bridges was used as a drag-screen partner for Chris Paul in transition or early-offense situations. Teams weren't equipped for the push-and-pivot from Bridges, often leading to fruitful opportunities for him or breakdowns elsewhere.

The Suns haven't just rolled that over; they've started to involve him more in half-court situations.

After setting 6.4 on-ball screens per 100 possessions last year, that number has risen to 9.6 this season. Possessions featuring a Bridges screen were fruitful this week, with the Suns generating an absurd 1.56 PPP. They should keep going to the well.

SMALL OF THE WEEK: ALEX CARUSO

There isn't anything Alex Caruso won't do if you ask him.

Run the offense? Sure. Roam the dunker spot for dump offs? Cool! Act as a spacer? Doesn't mind. Hound guards defensively? You got it. Need him to defend Giannis? He ain't scared.

That kind of gap-filling from a guard is valuable, especially in a league that's becoming less position-bound in terms of roles. Caruso happens to be a gnarly screener on top of everything else, with a strong understanding of angles and timing — how long to hold a screen (78.3 contact rate this week), and where to release.

Off the ball, I crack up at how much joy he takes in setting cross screens for Nikola Vucevic. Just look at this lead blocking!

He might be happier setting the pick than Vucevic is getting a play called for him.

The Bulls generated good offense with Caruso as an on-ball screener (1.00 PPP), and his off-ball work has been even better (1.13 PPP).

YOU SHOULD HAVE THE FACILITIES FOR THIS, BIG MAN: RICHAUN HOLMES

It's a bit weird in Sacramento.

Holmes proved himself as a capable starter, evidenced by a three-year stretch (2020-22) where he averaged 12.5 points and 7.9 rebounds in roughly 27 minutes a night. Holmes' minute load has never been lower (13.7) due to Domantas Sabonis being much better, and their skill-sets not being complementary enough to play together.

It will take an injury or roster change to dramatically shift things, but Holmes could stand to help himself by setting better screens. There's a line to walk between setting a screen to help your guard and setting one to get yourself open. Doing the former will likely cover both bases; doing the latter can lead to some ugly reps.

The numbers back it up; the Kings performed poorly on possessions featuring an off-ball (0.5 PPP) or on-ball (0.67 PPP) screen from Holmes this week. He connected on less than half of his on-ball screens (46.8 contact rate).

He simply has to be better than that.

WE SEE YOU TOO: GIANNIS ANTETOKOUNMPO

Not too much on the MVP frontrunner right now, who's been excellent in just about every non-shooting category you can think of. With his workload and the physicality he plays with as a scorer, it's understandable that he isn't on 10 literally all of the time.

But dawg, for an offense that could use a little juice in the half-court, it would be a little helpful if Giannis didn't make it blatantly obvious that an off-ball action was a preamble for something else.

Friday night's game against the Wolves was pretty glaring when I went back through it.

On the week, the Bucks generated just 0.89 PPP on trips featuring an off-ball screen from Giannis;

He doesn't have to be Steven Adams (hope he's alright) when prying guards open around the elbow (clips 1 and 4), nor does he have to be Draymond Green when guards are flying off baseline screens (clips 2, 3 and 5). Just ... get in the way. It'll help sell some of the action, make defenses work a little harder and thus open up cleaner scoring opportunities.

Screen Time will be back next Saturday!