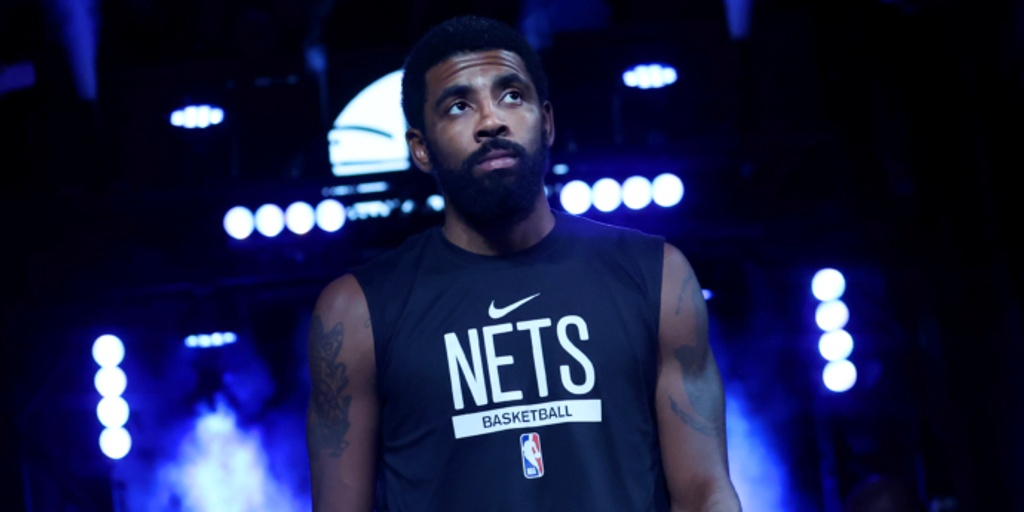 Over the last week, I have been very active on social media voicing my views on the Kyrie Irving situation, which prompted quite a few active NBA players to reach out to me privately to express that they too shared the view that the six requirements laid out for Irving to end his indefinite suspension were not only way over the top and excessive, but insulting.

Let’s do a quick recap of the events that have led us to this point.

Irving shared a link to the documentary “From Hebrews To Negroes: Wake Up Black America" without context, which caused a firestorm, as many viewed this as an endorsement of the film.

He also said: “I’m not a divisive person when it comes to religion. I embrace all walks of life. You see it on all my platforms. I talk to all races, all cultures, all religions. And my response would be, it’s not about educating yourself on what antisemitism is. It’s really about where the root words come from and understanding that this is an African heritage that is also belonging to the people. Africa is in it, whether we want to dismiss it or not. So the claims of antisemitism; who are the original chosen people of God? And we go into these religious conversations and it’s a big no-no, I don’t live my life that way. I grew up in a melting pot, and I say a melting pot of all races: white, black, red, yellow, Jewish, Christian, Muslim. You see the way I live my life now, I’m not here to be divisive."

This was prior to his spat with ESPN's Nick Friedell.

This was met with criticism, condemnation and accusations that Kyrie was antisemitic, since people felt he was endorsing and promoting antisemitic propaganda (which he said wasn’t his intention).

The media as a collective began taking turns bashing Kyrie, attributing beliefs to him that he did not express, and since he didn’t vehemently denounce these ideas, many took that as an endorsement. It's not uncommon for athletes to be attacked by certain media talking-heads who shall remain nameless, but what we saw was a unified, non-stop, public lashing of Kyrie across the board.

He deleted his tweet. Then, during another press conference, he was asked if he was antisemitic and his answer was, "I cannot be antisemitic if I know where I come from." He also explained that he meant no harm, while adding that he wasn’t the one who made the documentary.

This drew the ire of Brooklyn Nets governor Joe Tsai, as Irving was swiftly suspended for a minimum of five games and given six steps that had to be completed before he would be allowed to return.

The Nets released a press release that stated: "We were dismayed today, when given an opportunity in a media session, that Kyrie refused to unequivocally say he has no antisemitic beliefs, nor acknowledge hateful material in the film. This was not the first time he had the opportunity — but failed — to clarify. Such failure to disavow antisemitism when given a clear opportunity to do so is deeply disturbing, is against the values of our organization, and constitutes conduct detrimental to the team. Accordingly, we are of the view that he is currently unfit to be associated with the Brooklyn Nets."

Many people (including some who strongly condemned Kyrie for posting the link to the documentary) viewed this as a blatant attempt to emasculate and dehumanize Irving in front of the entire world.

Irving eventually posted a lengthy apology to the entire Jewish community on Instagram.

As I voiced my personal disproval of the six steps he had to complete to return — which is unprecedented for an NBA suspension — that’s when I started receiving messages from active players who were also outraged by the treatment Kyrie was receiving. However, they didn’t feel comfortable saying anything out of fear that a similar outrage would be directed toward them or that an objection to Kyrie's punishment would be interpreted as supporting him posting the movie. They didn't want to be lumped in with Kyrie and face the same backlash. Their apprehension was very understandable.

This caused me to ponder the question: what if this Kyrie backlash causes athletes to go silent again? After all, besides Mahmoud Abdul-Rauf and Craig Hodges, athletes were pretty quiet back in the 1990s. That continued through my era in the early 2000s. Only recently, since Colin Kaepernick's protest, has there been a resurgence of athletes using their platforms and voices, and it’s been beautiful to see. But it’s also important to note that since Kaepernick took his stance, he has not played a single snap in the NFL. In addition, all of the protests have stopped and, for the most part, NFL players speaking out has significantly reduced almost to a whisper. Could that happen in the NBA?

Over the last 24 hours, both NBA commissioner Adam Silver and Joe Tsai said that they have met with Kyrie and can report that, in their opinion, he is not antisemitic, which has led many to believe that Irving will be returning to the court soon. But has the damage already been done? 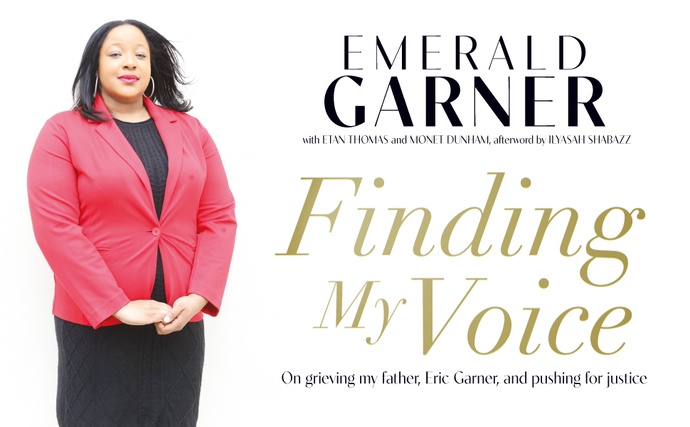 I reached out to Emerald Garner, the daughter of Eric Garner who has a newly-released book that I co-wrote called "Finding My Voice," to discuss this situation. We talked about what it meant to her personally when athletes used their voices and platforms to support her family and whether the Kyrie backlash might scare players into being silent going forward.

Etan: Do you think the backlash that Kyrie Irving is currently receiving has the potential to silence athletes?

Emerald: "I hope not. Listen, I don’t know anything about the film, and don’t support antisemitism in any form or fashion, but I didn’t actually hear Kyrie say anything antisemitic. And correct me if I’m wrong, but he didn’t produce the documentary, did he? They’re acting like it’s his film."

Etan: No, he didn’t produce it, but to be fair, he did share it without context. But he also cleared up his reasoning for sharing it in his initial press conference. He said he was just sharing it for the information and wasn’t endorsing or promoting the film.

Emerald: "So, he apologized and deleted it, right?"

Emerald: "But he still has to go through all of these hoops before he gets to play again?"

Etan: Yes, the six steps he has to complete are:

1) He has to apologize and condemn the film

5) Meet with the Anti-Defamation League and Jewish leaders

6) Meet with Joe Tsai to “demonstrate an understanding of the situation.”

Emerald: "Wow, that’s really a lot. So let me say it like this: officer Daniel Pantaleo murdered my father in broad daylight on video and he didn’t have to do anything before he returned to active duty. I wrote about it in my book how traumatizing it was to see him laughing and joking with other cops on the street like nothing happened. He didn’t have to do anything. He didn’t even have to apologize to the family of the man he murdered. But they’re gonna make Kyrie do all this before he can play basketball?"

Emerald: "Listen, Kyrie and LeBron and all of the players on the Brooklyn Nets at the time and Kobe and all of the Lakers team supported my family after my father was choked to death by the NYPD. Back then, every time I turned on the TV, all I saw were people justifying his murder and saying why my father deserved to die. I will forever be thankful to him and all the athletes who stood with us for that." 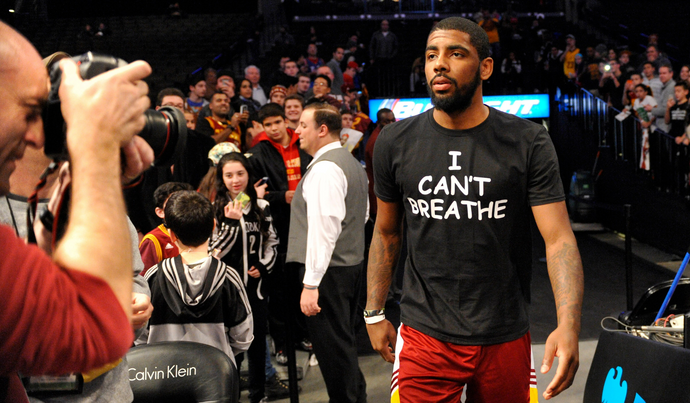 Etan: Yeah, a lot of people were quiet then, but athletes weren’t. That started a new boom of athletes using their voices and platforms. That’s why I wrote my book "We Matter: Athletes And Activism" and interviewed so many athletes and impacted family members. I wanted to encourage the next generation of athletes to continue to use their voices and show the impact it has. My fear now is that after this, athletes may start being quiet again or people may advise them to be quiet again in fear of the Kyrie Irving treatment.

Emerald: "And that would be tragic. You have done an amazing job promoting that concept and, yes, there is great power in their voices. When I turned on the TV and saw all of the NBA players wearing 'I Can’t Breathe' shirts… I’m getting emotional right now..."

Etan: I’m sorry, I don’t want to trigger you.

Emerald: "No, it’s ok. You know I always get emotional when we talk, and we talked about this in my book, but when I saw them wearing those shirts, it made me feel seen. That someone actually cared about what happened to my father. It didn’t feel like anyone cared. The police definitely didn’t show any remorse. They all stood around and watched as Officer Pantaleo choked my father to death, then they all supported Pantaleo, not one of them condemned anything. So many people supported Pantaleo like they always do when the police murder someone. But it was Kyrie and NBA players who supported me. And my father loved basketball. He loved every New York team that existed. Even sports he wasn’t even that into, if they were [a team in] New York, he supported them. He would’ve been so proud how they all supported him. I can see his big smile now. I can’t tell you how much I miss seeing that big smile of his."

Etan: It’s so important that people know this, and understand this. I’ve gone on multiple programs recently and said that silencing athletes that you disagree with isn’t the answer. Instead, have an actual dialogue. And I really believe that.

Emerald: "Listen, we have done enough speaking engagements for me to fully understand and be a supporter of dialogue. Of course it’s important. And not lectures but actually listening to because, correct me if I’m wrong, but I didn’t hear Kyrie say anything bad or anti-anything. He said I love everyone, I respect all religions. It’s like they’re trying to make him believe things that he didn’t say he believed. At least that’s how I see it."

Etan: I definitely agree. I didn’t hear him actually say anything antisemitic. I’m just worried about the effect it will have on athletes moving forward. When I was playing, I had so many people warn me to be careful (including David Stern). I had other people who literally said you don’t want to get done like Craig Hodges or Mahmoud Abdul-Rauf. I heard Shannon Sharpe initially say that on his show "Undisputed." I see people putting that notion out there.

Emerald: "Well, that would be tragic if athletes did 'shut up and dribble.' I’mma be honest, I didn’t realize the impact y’all have until I started working with you and talking to other impacted families who had athletes stand up for them. How Russell Westbrook spoke up for Terence Crutcher, how Stephen Jackson spoke up for George Floyd, how LeBron speaks up for a lot of families, how the whole Milwaukee Bucks [team] spoke up for Jacob Blake, how the whole NBA spoke up for Breonna Taylor and I can go on and on and on. It’s important. Take it from me, it means everything."