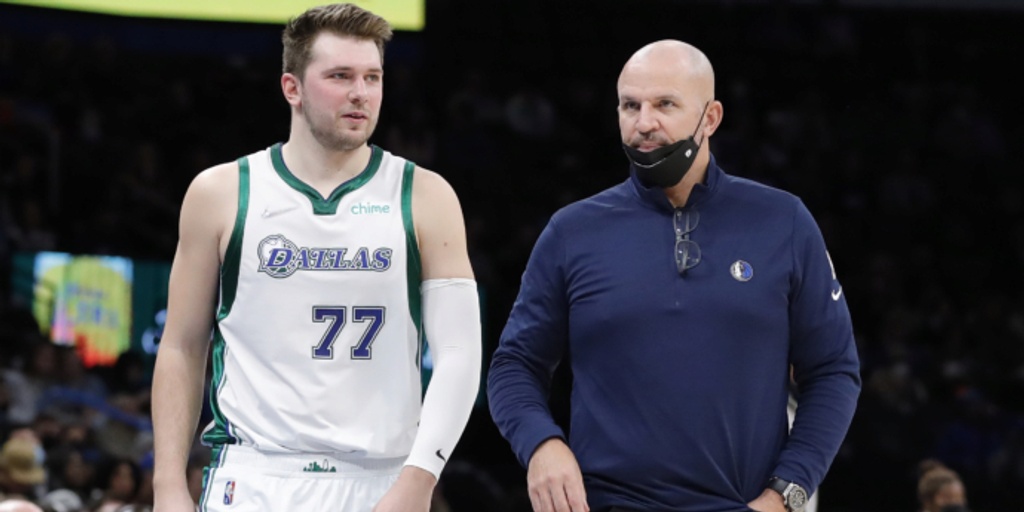 Luka Doncic currently has one of the highest usage rates in NBA history.

Mavericks head coach Jason Kidd has raved about Doncic’s incredible start, but he has also expressed concerns about his superstar’s unsustainable workload. He recently told reporters that Doncic will break down “before Christmas... if we keep this going."

“One or the other is going to show, if he’s human or not. We believe he’s human,” Kidd said recently, according to Mavs.com. “But when everyone is going to come at you every night on the defensive end and then we’re asking you to do everything offensive, it’s going to show within 25 games. And I would say that’s somewhere around Christmas.”

According to PBP Stats, 93.5% of Doncic’s shots are self-created, meaning he has the ball for at least two seconds before shooting. Since they started tracking this stat, there have only been four other instances where a player was above 90%. And Doncic is scoring most of his points at the rim, which is even harder on a player’s body.

“Everyone’s going to say he’s 23 years old, but he’s human,” Kidd said. “The other side of this is he’s falling a lot right now and that’s one of the areas that we’ll talk about is I’m going to try to keep him off the floor. Wood always wins, because he is human. Bruises will start to appear. You look at the great ones. (Allen Iverson), a lot of guys hit the floor a lot. It doesn’t catch (up to) you in that year or the second year, but Father Time (wins) faster just because of the hits. And it’s not the physical hits, the human-to-human hits – it’s the floor. The floor is going to win. It’s always won, it’s always been hard, and it’s not going to change. So we have to figure out how to keep him on his feet.”

Kidd has talked to Doncic about lowering his usage rate. He also wants to get Luka some rest days in the near future and tweak how they are utilizing Doncic.

“These next couple of games, we’re going to try to look at something different, and he has to trust us,” Kidd said. “Because he can easily say, ‘I don’t want to do that, I’m in a rhythm, I’m scoring 30-something a night. We’re winning some games.’ I just think being able to show him what I see, and then there’s a respect and trust factor that we have for one another, and that helps. But the big thing is he’s from a different planet. He makes the game look so easy. It’s at a different speed. He’s not afraid of the moment, he loves the competition, and no matter who’s out there on the floor with him he believes he can find a way to win.”

The Mavs also need other players to step up and take some of the load off of Doncic, which Kidd acknowledged.

“There are possessions [where we] have to help Luka on defense, because he’s doing so much on the offensive end,” Kidd said. “We’ve got to be able to find that balance for him to participate defensively so that helps us win games, but the usage rate is so high, so sometimes there’s going to be some situations where he doesn’t participate. It happens. Been there done that.

“But the one thing is we’re only 10 games into this, so we’ll figure that out. But the big thing is understanding who’s going to help, who’s going to be consistent being that second, third, fourth player. We have a group. We don’t just have Robin next to him. We have a group of guys that have to participate. Right now, we’ll have one or two participate, and then those two disappear and then another two show up. We have to become consistent in that area.”