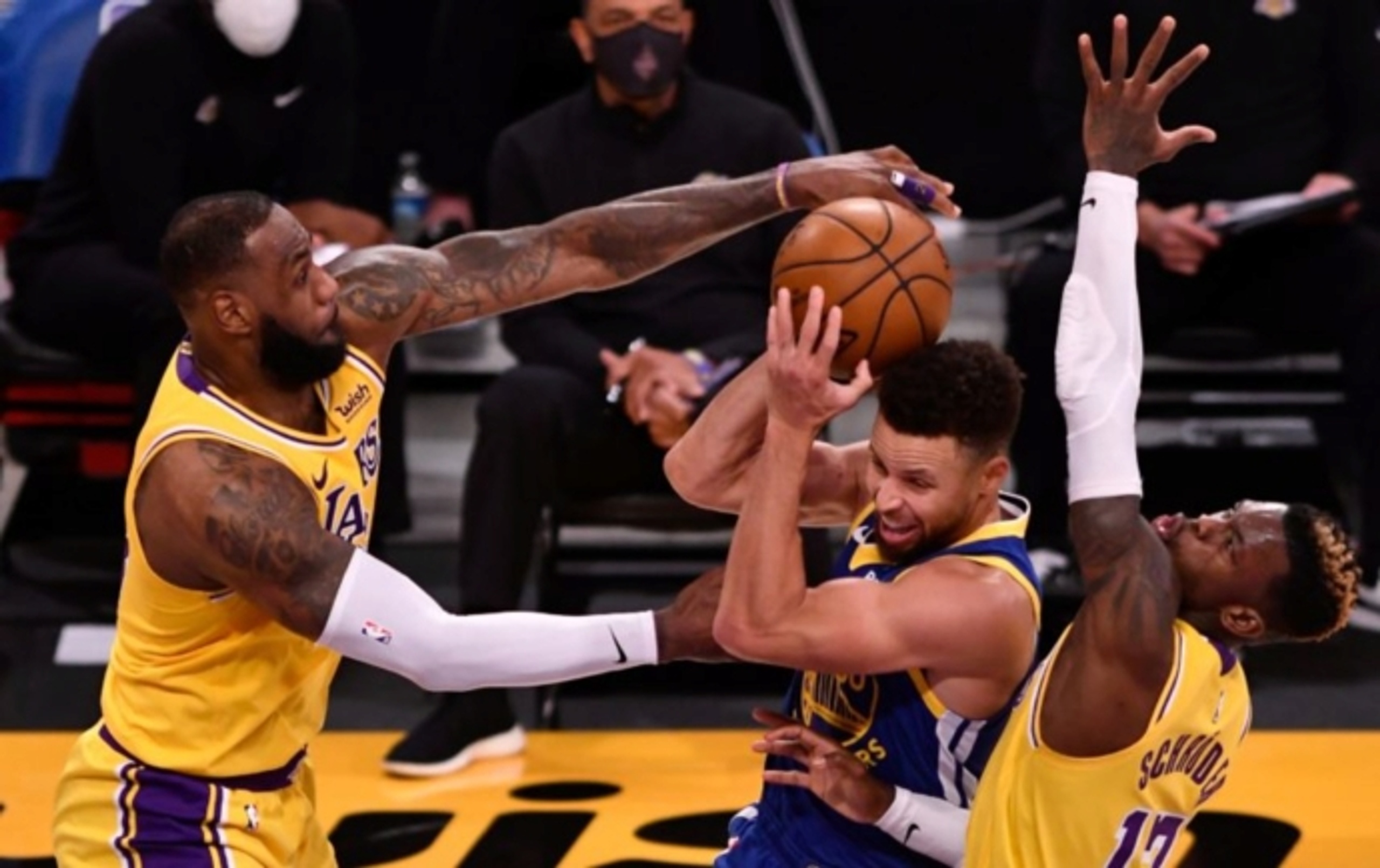 Rotation Roulette: How the Lakers shut down offenses

With 8:30 left in the first quarter of Tuesday’s Timberwolves-Lakers game, Karl-Anthony Towns finds himself stationed on the left block.

Jarred Vanderbilt curls off of Towns as he relocates above the break. Ricky Rubio tosses the entry pass, cuts to the basket, then retreats to the right corner. Damian Jones is defending Towns, but the Lakers decide that isn’t enough. Kentavious Caldwell-Pope rushes Towns, but the Big Fella is able to loft an overhead pass to Rubio in the corner for a triple.

On its face, that is tremendous offense for the Wolves. They fed their best player, drew two to the ball, and got points out of the possession. Not only was it a three-ball, it was a corner three -- the most fruitful perimeter shot you can muster.

However, I’d argue that this is a subtle example of why the Lakers have been the NBA’s best defense all year long, and have remained an elite unit even with Anthony Davis sidelined.

Dig a little deeper into the possession and you’ll be wowed by the level of detail, the communication, and the calculated gamble the Lakers take here.

Watch Dennis Schroder, an All-Defensive-Team candidate this season, as he follows Rubio on the cut. He keeps an arm high to take away a potential pass; with that arm as a security blanket, he’s able to keep his eyes on Rubio and the action on the weak side.

As Caldwell-Pope shoots down to double Towns, Vanderbilt smartly cuts into open space. With Schroder facing the action, he’s able to call out Anthony Edwards filling Vanderbilt’s space above the break. Markieff Morris picks up Edwards, while Schroder cuts off the movement from Vanderbilt. 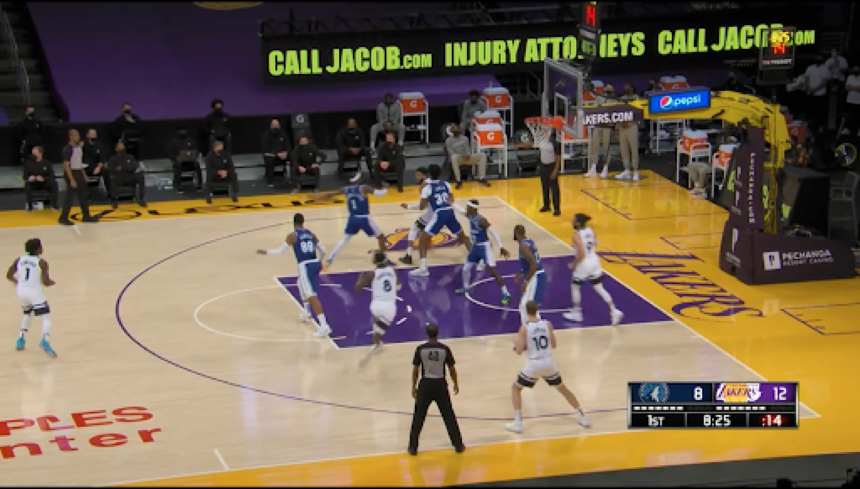 Schroder holds firm in the paint with Vanderbilt, while LeBron James is now tasked with “splitting the difference” -- playing between two players -- on the backside. Normally, a player would sit directly between the two players spotting up, reading the eyes of the ball-handler before committing to a rotation. Instead, LeBron just flat-out rotates over to Jake Layman. 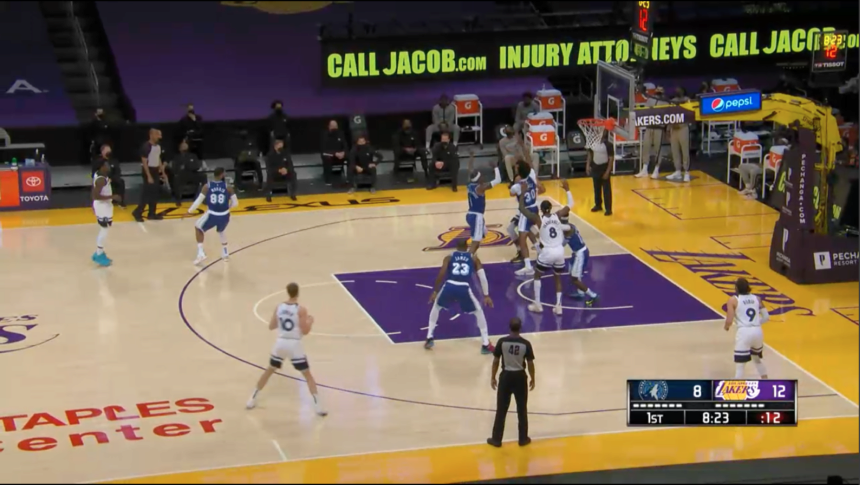 It’s easy to get caught up in the flashy stuff -- blocks, steals, drawn charges, deflections that lead to football pileups. All of that is important. But at its core, defense is about forcing offenses into uncomfortable decisions -- taking away the best options, making teams beat you with counters.

Within that context, the Lakers’ elite defense makes sense. They’re tops in the NBA in defensive rating (106.0), and rank in the top five in half-court defense (91.7 points per 100 plays) and transition defense (117.2 per 100 plays), per Cleaning The Glass.

Their defensive shot profile makes their ethos pretty clear. The Lakers allow the 10th-lowest share of threes in the league (34.7% of shots), and the ninth-highest share of shots at the rim (36%). They’re a funnel-and-rotate group with a healthy dose of ball pressure.

Anthony Davis has been out since February 16, a 12-game sample, and the Lakers have held their own. Their 108.0 defensive rating ranks third in the league during that span; their half-court defense has slipped to a top-12 level, but their transition defense has tightened by over four points per 100 plays.

In fact, the Lakers have been by far the stingiest defense in the league following a missed shot, allowing 89.1 points per 100 plays, according to Cleaning The Glass. For comparison, Steve Clifford’s Orlando Magic rank second with a 104.1 clip.

LeBron’s chasedown blocks are dope, but the stops don’t have to be that loud.

Look at the early effort and communication. Talen Horton-Tucker doesn’t dwell on the miss that took him out of bounds; he gets his butt back in the play. Caldwell-Pope eyes Rubio, calls for Morris to pick him up, then backpedals with Layman. Horton-Tucker picks up Towns as he attacks from the wing. Jones waits until Towns leaves his feet before skying to challenge the shot, then inhales the ball. Crisis aborted.

In the half-court, the Lakers have their thesis -- eliminate easy threes from good shooters -- but go about it in different ways. Their coverage against Towns, one of the best shooters on the planet, was flexible and effective.

Their ICE coverage -- you’ll recognize it by the on-ball defender shifting his body in a way that forces the ball-handler down the sideline -- had layers to it. Sometimes, they’d ICE the screen, then execute a “peel switch” to take away an easy catch-and-shoot opportunity.

Other times, they’d extend their coverage on the ball-handler and rely on a third defender to bother Towns on the catch. You can see Schroder stationed at the nail, prepared to rotate to Towns if the pass is made, or in position to deflect a longer skip to Rubio. 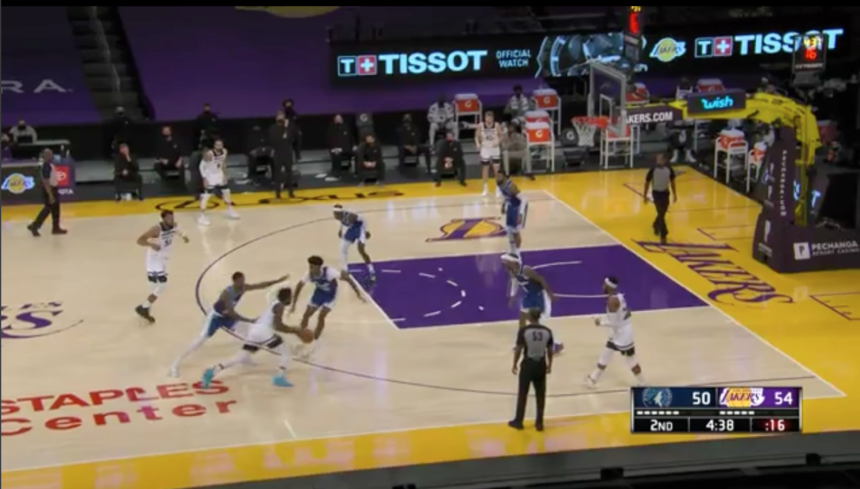 Even when the coverage wasn’t perfect, you could see the Lakers had contingency plans in place.

Montrezl Harrell stays a beat too long as Schroder spins off the Towns screen and stays attached. With Harrell caught in No Man’s Land, Towns is open on the pop. You’d love for Kyle Kuzma to give a little more “oomph” on this rep, but he’s there enough to be in Towns’ peripheral.

Look a little deeper, and you can see Wes Matthews doing some subtle work on the weak side. He’s directing some traffic as the Wolves set up the ball screen, and is in prime position to take away the cut from Juancho Hernangomez as Kuzma rotates over.

The Lakers continue to smother teams with a blend of speed and size. They’re able to take away windows by switching a multitude of off-ball screens. There is no hesitancy to show their bigs at the level of the screen, because they know they have one of the best helpers in NBA history to clean up messes. LeBron remains a marvel -- and a legitimate candidate for an All-Defensive selection at his big ol’ age -- because of his feel and athleticism.

He puts out a ton of little fires on a nightly basis, like this:

He’s eyeing the Edwards post-up while Vanderbilt and Layman exchange behind him. Morris calls out a switch, then opts to follow his man anyway. LeBron adjusts on the fly, then picks up the cutting Layman. Edwards ends up fading, thus closing his own passing window, but LeBron is able to box Layman out and clean the glass.

Of course, the loud plays are there too:

It’s kinda funny that LeBron is so preoccupied with the duty of cleaning up messes that he ends up ball-watching and is forced to clean up his own. The reaction time and the precision of the block is pretty freaking incredible.

Even on a night where the Lakers gave up 121 points -- and yeah, we should note that it was the second night of a back-to-back -- you can see the “why” behind the Lakers’ elite defense. They’re a well-coached group with scheme flexibility; a quick bunch at the point of attack with size waiting to swallow up rim attempts.

With Davis and Marc Gasol returning at some point during the second half, the Lakers will likely tighten their grip on the “best defense” title. It’s a bit disheartening for opponents: there are no easy answers against the Lakers, and they still manage to take away your best options.