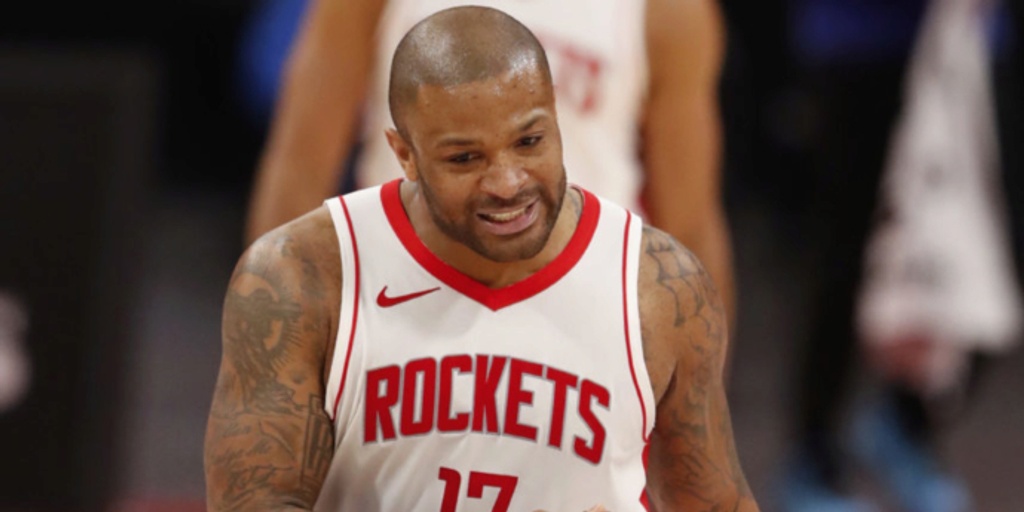 Rockets' P.J. Tucker 'frustrated' he hasn't been moved to a contender

Update from Tim MacMahon of ESPN: Stephen Silas on PJ Tucker: “We’re going to try to figure out something that works for him and works for us as far as him not being on the team anymore. I was under the assumption that he was going to play tonight and he didn’t play. That was disappointing.”

Original Report: As Rockets continue to discuss deals with several teams, P.J. Tucker is a healthy scratch vs. Kings and remains frustrated that he hasn’t been moved to a contender, sources said. It's unclear when Tucker will return to lineup before March 25 deadline.

ANALYSIS: P.J. Tucker had expressed his desire to leave the franchise quickly after James Harden was traded, and now almost two months removed from that deal, Tucker still finds himself on the now lottery bound Houston Rockets. Tucker figures to draw some interest across the league, as he is an excellent 3-and-D player and also provides great leadership on and off the floor.

Tucker is averaging just 4.4 points and 4.6 rebounds per game this season, but again, his play goes beyond what the statistics show.

The Houston Rockets say they are attempting to trade disgruntled forward P.J. Tucker.

Tucker traveled with the Rockets to Sacramento for their game against the Kings on Thursday night but did not play and was on his way back to Houston before the game ended.

“I was under the assumption that he was going to be playing tonight,” coach Stephen Silas said following the Rockets’ 125-105.

“Before the game I found out that he was not going to be playing. At some point there was some mutual agreement with P.J., his agent, (Rockets general manager Rafael Stone) and the organization that P.J. will not be with the team anymore.”

Tucker, 35, is in the final season of a $31.8 million, four-year deal. The veteran forward has been pushing for a trade for the past few weeks and had grown increasingly frustrated by the organization’s apparent lack of attempts to make a deal happen.

With Tucker averaging career lows in scoring (4.4 points) and shooting percentage (36.6), the Rockets initially planned to have Tucker come off the bench in the game against Sacramento. That would have ended Tucker’s streak of consecutive regular-season starts at 216 and would have been the first time that he came off the bench since Feb. 6, 2018.

When the game started, Tucker was not on the Rockets bench and was not seen at Golden 1 Center.

If he is traded, Tucker would be the third Houston starter from last season to be dealt away. The Rockets shipped Russell Westbrook to Washington in exchange for John Wall last December, then packaged James Harden to the Brooklyn Nets as part of a multi-team trade in January.

“Honestly the whole year’s been kind of a little whirlwind,” Rockets guard Victor Oladipo said. “Just a big adjustment … a lot of stuff that is out of our control. It’s easy to be negative right now when things aren’t going well as a whole, but we have to keep positive. It’s tough right now. At the end of the day it could be far worse.”

Silas said the decision for the Rockets and Tucker to part ways was mutual.