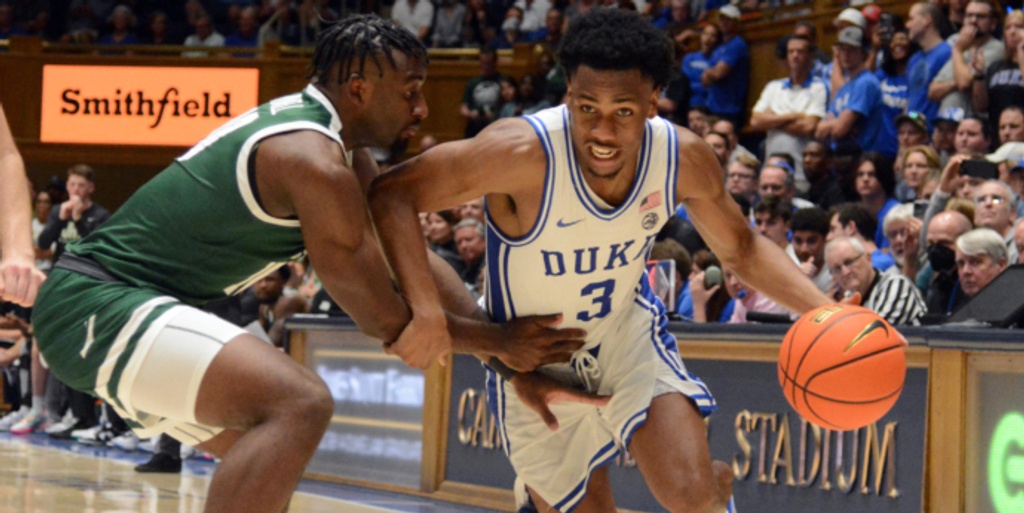 Roach leads No. 7 Duke past Jacksonville in Scheyer’s debut

Freshman Mark Mitchell had a team-high 18 points for the Blue Devils, who used a 25-4 run spanning halftime to blow the game open.

It was a quality start to a season of massive change for the Blue Devils, starting with Scheyer taking over for retired Hall of Famer Mike Krzyzewski. Duke has 11 new players, including the nation’s No. 1-ranked recruiting class and two power-conference transfers. The Blue Devils didn’t have top freshmen Dereck Lively II and Dariq Whitehead for this one as they recover from preseason injuries.

Mike Marsh scored 15 points to lead the Dolphins, who shot 34% and missed 18 of 19 3-pointers before making two meaningless 3s late.

Armando Bacot added 16 points and nine rebounds for the Tar Heels, who were perhaps most impressive at the defensive end. UNCW shot 29.8% from the field.

The Tar Heels, who were the NCAA Tournament runner-up in April, began the new season with the top ranking for the first time in seven years. It’s a record 10th time that North Carolina has been ranked No. 1 to start a season — one more than rival Duke.

Trazarien White scored 19 points for UNCW, which faced a top-ranked team for the first time in program history.

Sasser, a preseason All-American, scored 11 points in the first half. He finished 7 of 14 from the field and made 4 of 8 3-pointers. The senior guard missed the second half of last season and all of Houston’s run to the Elite Eight with a toe injury.

Tshiebwe had a procedure last month on his right knee. Point guard Sahvir Wheeler (right leg) and sophomore forward Daimion Collins (personal reasons) were also out, but the Wildcats still shot 55% against the overmatched Bison.

Kobe Dickson scored 17 points and Elijah Hawkins had 14 for Howard, which shot 34%.

LAWRENCE, Kan. (AP) — Jalen Wilson had 19 points and 11 rebounds, Gradey Dick added 23 points in his debut, and Kansas began defense of its national championship without suspended coach Bill Self by routing Omaha.

Self served the first of a four-game punishment along with assistant Kurtis Townsend as part of the fallout from a 2017 federal investigation into college basketball corruption.

Jaeden Marshall scored 13 points and Luke Jungers had 12 for the Mavericks.

Flagler, a preseason All-Big 12 pick who also was the Bears’ leading scorer last season, also had eight assists and one of his four 3-pointers started a 24-0 run midway through the first half.

LJ Cryer had 16 points and Dale Bonner, another returning guard, had 14.

OMAHA, Neb. (AP) — Baylor Scheierman made back-to-back 3-pointers midway through the second half to give Creighton the lead for good.

Arthur Kaluma scored 17 points, Trey Alexander had 12 and Scheierman added 11 as the Bluejays won their 25th opener in 26 years.

St. Thomas, a Summit League member beginning its second season in Division I, gave the Bluejays all they could handle until the last few minutes. Andrew Rohde had 15 points to lead the Tommies.

FAYETTEVILLE, Ark. (AP) — Trevon Brazile had 21 points and 12 rebounds in his debut as Arkansas won its season opener.

Brazile, a sophomore transfer from Missouri, scored six straight points during an 11-0 run early in the second half that gave Arkansas a 16-point lead with 15 minutes left.

Wichita State transfer Ricky Council led the Razorbacks with 22 points on 9-for-14 shooting.

Key, an Indiana State transfer, connected on 4 of 8 3-pointers to ignite a sluggish Volunteer offense. Zakai Zeigler scored all but two of his 12 points in the second half.

AUSTIN, Texas (AP) — Tyrese Hunter scored 18 points to lead Texas past UTEP in the debut of its new arena.

Hunter, a transfer from Iowa State, was 6-of-8 shooting and added five rebounds. Ze’Ri Onyema led UTEP with 10 points.

Texas this season moved to the $375 million Moody Center on the edge of campus, leaving behind the old Frank Erwin Center after 45 years.

The Hoosiers have won all six matchups in the series and are 26-0 all-time against Ohio Valley Conference foes.

Mark Freeman led the Eagles with 14 points, and Drew Thelwell had 11 for the OVC favorites.

WACO, Texas (AP) — Mike Miles hit a 3-pointer with 51 seconds remaining to finally put TCU ahead to stay against Arkansas-Pine Bluff, which built an early 20-point lead in the season opener for both teams.

Miles, the preseason Big 12 player of the year, hit from deep beyond the top of the key for a 71-68 lead.

Emanuel Miller had 15 of his 19 points in the second half, and Miles finished with 15 points for the Horned Frogs. They returned all five starters and five other scholarship players after winning their first NCAA Tournament game since 1987.

Shaun Doss had 25 points with four of Arkansas-Pine Bluff’s 13 3-pointers.

AUBURN, Ala. (AP) — Wendell Green Jr. scored 16 points while K.D. Johnson and Johni Broome each had 12 to lead Auburn to a season-opening win over George Mason.

Neptune replaced Hall of Famer Jay Wright, who retired in the offseason. The Wildcats returned three starters (a fourth, Justin Moore, was injured) from the team that lost a national semifinal game to Kansas. Eric Dixon added 20 points for Villanova.

Daniels made his first five 3-pointers and the Wildcats used an early 10-0 run to put away their city rival and spoiled 74-year-old coach Fran Dunphy’s return to the bench.

Ballo scored 18 points, helping Arizona set a school record with 71.7% shooting from the floor against the reigning Southland Conference regular-season champions. The Wildcats opened the game with a 30-4 run.

Armaan Franklin led Virginia with 21 points in the season opener for both teams, and Francisco Caffaro had 10.

Justin Wright scored 20 and Eric Boone had 18 for the Eagles, who used a 12-0 run just after halftime to go ahead. But Clark hit a 3 and Beekman followed with a steal and a breakaway.

Fellow newcomer Jaedon LeDee and Lamont Butler scored 11 points apiece and Nathan Mensah had 10 for the Aztecs, who won their 10th straight season opener and their 17th in 18 seasons.

TUSCALOOSA, Ala. (AP) — Freshman Brandon Miller had 14 points and 13 rebounds in his debut as Alabama beat Longwood.

EUGENE, Ore. (AP) — N’Faly Dante had 16 points and 10 rebounds as Oregon opened with an easy win over Florida A&M.

Keeshawn Barthelemy added 13 points for the Ducks, ranked to start the season for the ninth straight year. Will Richardson scored 11.

Jordan Tillmon and Jordan Chatman had eight points apiece for the Rattlers, who have 11 new players. Florida A&M coach Robert McCullum was on Oregon coach Dana Altman’s staff from 2014-17.

After Purdue Fort Wayne opened an 8-4 lead, Michigan went on a 20-0 run to take control.

Dain Dainja added 17 points on 8-of-9 shooting and grabbed 10 rebounds for the Illini, who outrebounded the Panthers 53-30 in the opener for both teams.

DAYTON, Ohio (AP) — Mustapha Amzil scored 14 points, DaRon Holmes II and R.J. Blakney each had 13 and Dayton beat Lindenwood in a sluggish opener for both teams.

Dayton was without injured point guard Malachi Smith and didn’t play particularly well until late, but it had a large margin for error against Lindenwood, which was playing its first game after moving up to Division I.

Chris Childs had 15 points for the Lions, who shot 33% from the field.

LUBBOCK, Texas (AP) — Daniel Batcho had 12 points and 10 rebounds as Texas Tech rolled past Northwestern State in both teams’ opener.

Texas Tech broke it open late in the first half and led 42-23 at halftime.