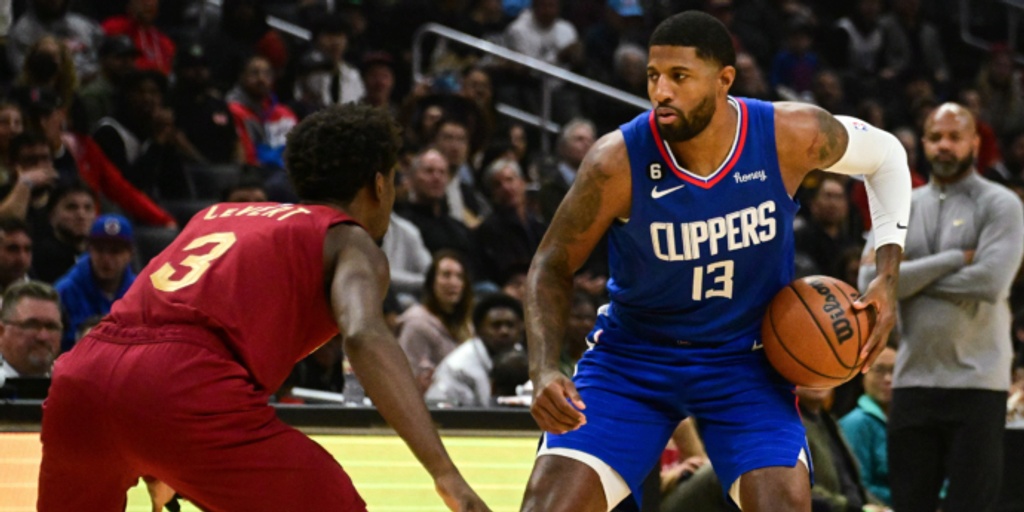 LOS ANGELES (AP) — Paul George scored 26 points and made the tiebreaking three-point play with 37 seconds left, and the Los Angeles Clippers rallied from a 13-point deficit in the final five minutes to snap the Cleveland Cavaliers' eight-game winning streak with a stunning 119-117 victory Monday night.

Norman Powell scored 10 of his 17 points during the frantic final rally by the Clippers, who finished the game on a 21-6 run. Cleveland led 112-100 before the Clippers scored 15 straight points while the Cavs missed seven consecutive shots and committed three turnovers.

Powell tied it on a running layup while getting fouled with 1:03 to play. After Darius Garland missed a 3-pointer, George made his leaner in the lane and hit the free throw.

Donovan Mitchell hit eight 3-pointers while scoring 30 points, and Mobley added a season-high 26 before fouling out in the final minute for Cleveland, which hadn't lost since opening night in Toronto on Oct. 19.

Garland had 19 points and 12 assists, and Jarrett Allen added 10 points and a season-high 20 rebounds as the Cavs' longest winning streak since late 2017 finally ended in dramatic fashion.

Morris scored 20 points for the Clippers, who earned a shocking victory despite the continued absence of two key veterans.

Kawhi Leonard missed his eighth straight game since Oct. 23 while indefinitely resting the surgically repaired right knee that forced him to miss all of last season. The Clippers also went without John Wall, who isn’t playing back-to-back games as he rebuilds the strength in his left knee after playing in only 40 games since December 2018 and not participating at all in two of the past three seasons before he joined LA in July.

Mitchell put up another prolific offensive performance with his new team, but the guard didn't hit a field goal in the final 11 minutes.

After a five-point outing against the Lakers, Mobley 16 points in the first half against the Clippers. Mobley grew up in Temecula and then played a mile down Figueroa Street at USC for one season before Cleveland made him the third overall pick in 2021.

Clippers: Luke Kennard scored six points after sitting out Sunday with discomfort in his chest. ... Jackson started and had 18 points and seven assists after sitting out the final 18 minutes Sunday following a clash of knees with Utah's Nickeil Alexander-Walker.

Cavaliers: At Kings on Wednesday.