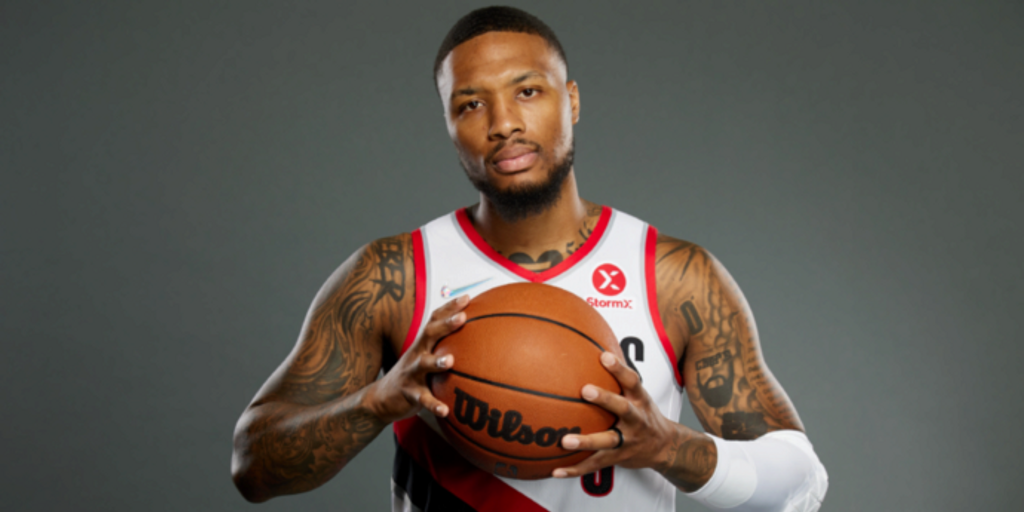 I had the honor of sitting down with longtime NBA analyst Ric Bucher for my show, "The Rematch." We discussed in-depth the strained relationship between current athletes and the media, and what makes him different. We also discussed Brian Grant entrusting him to co-write his book, "Rebound," in which Grant chronicles his battle with Parkinson’s Disease.

Among those topics, Ric and I dove into whether Damian Lillard should leave the Portland Trail Blazers to chase an NBA championship. This wasn’t a quick, "should he leave or should he stay" type of conversation; Ric carefully presented a very strong case as to why Lillard should stay in Portland for his entire career.

I will say that players like Patrick Ewing, Scottie Pippen, Hakeem Olajuwon, Shaq and many more can attest to the fact that when a team makes the decision that you can no longer help them — or when they want to go in a different direction — they have no problem trading the player... no matter how many years of service they provided or championships they've won for the organization.

That being said, Ric made a strong case for Lillard, at least from his choosing, to stay with the Blazers for his entire career. Here's a snippet of our conversation from the latest episode of The Rematch.

Etan Thomas: Keeping it in Portland, since we're talking about your book with Brian Grant and his battle with Parkinson’s (again fantastic read) — I want to talk about Damian Lillard. It seems to come up every year, the question of: Should he stay or should he go?

And so, people who say that he should go usually say the same few arguments. They question if he has enough help, or if Portland is doing enough to get him the help that he needs, or if he is as good enough of a superstar to be able to get them over the hump. Does he have what it takes? Does he owe it to himself to see if he could get it done with like a different team?

Ric Bucher: So I think Damian Lillard should do whatever he wants to do. I don't think there's a wrong... I mean, that's his choice, right? And I think he's done everything in an honest and open way with the Portland Trail Blazers. He's been a model leader of the team. I don't think he owes them anything.

That said, this is where it becomes difficult because Damian is my son's favorite player. I went up and had my son and got him a pass so he could walk around with me. And we're standing on the court talking to somebody from the Blazers, and Damian comes up and says hello because he and I have known each other for awhile, so I introduced him to my son. I know what that meant to him; my son was just blown away: "I just got to meet my favorite player." And I just love and appreciate the way Damian has carried himself. I play piano, I have a musical background. So the fact that he is so accomplished in two different disciplines, I respect the hell out of that. So I admire everything about him. That said, one of the reasons that the Blazers have not competed for a championship is Damian Lillard.

Ric Bucher: Well, he's not Kevin Durant. He's not LeBron James. He's not Kawhi Leonard. Damian has made the most out of what he is physically, but he's not a dominant two-way player. I often compare him to Steph Curry. I don't know that Steph is winning championships if he doesn't have Klay [Thompson] in the backcourt next to him, or Draymond [Green] or the team around him. I think Steph is a tremendous leader, but I think he needed a big, defensive two-guard next to him and a playmaker and a small who can play big like Draymond. And the chemistry between those three of them, their personalities and their strengths and weaknesses as players, just fits perfectly. That's what made them a championship-nucleus team.

Damian needs that same thing, but he needs a little bit more of it. Like, he needs to have the right team built around him because he has certain weaknesses as superstar of a team that KD and LeBron and Kawhi, and guys who have been the catalyst of championship teams, don't have. They can physically dominate their position at both ends of the floor. Damian Lillard cannot do that. So does he need the right team? And is that reason to leave?

Ric Bucher: Okay, if he leaves, is he guaranteed to have that team built around? I can tell you this: In Portland, they're trying to build that team around him. Neil Olshey is constantly making moves trying to find that playmaking small forward. To me, that's the ultimate piece that they need to find, you know? Mobile, athletic bigs that can protect CJ [McCollum] and Damian on the backside. They’re trying to put it together in Portland that, as you know, is like, not really a free-agent destination. So you're going to have to trade or draft. Damian knows that they are trying to build that around him. If he goes any place else, he's not guaranteed that. He’s probably going to join another star. But Philadelphia, for example, well, are they going to be building that around Damian or are they going to be building that around Joel Embiid?

Etan Thomas: Let me ask you this: So everything that you said, I understand it. But let me go back, because as you said that one of your son's favorite players is Damian Lillard. So one of my son's favorite players is Giannis [Antetokounmpo]. He loves KD, and he’s (got) that body type: long, skinny, you know what I mean? He loves those two players... So I literally heard, and he literally heard, everything that you just explained and said about Giannis before they won. Literally everything, almost verbatim.

Ric Bucher: But it's different.

Ric Bucher: It's different, because...

Etan Thomas: Because [the Blazers] are one player away. Now, I will say that I thought that the addition of a point guard Jrue Holiday was huge for [the Milwaukee Bucks]. In fact, I don't think they win the championship without Jrue Holiday. I even wrote an article for Basketball News about it.

Ric Bucher: Agreed. So in both cases, you have a guy who has stayed to this point, right? And the team has tried to figure out, "How do we put the pieces around them?" The great distinction I see — and again, this is why I have immense respect for Damian — I feel as if Damian is maximizing who and what he can be as a player. I looked at Giannis, and I felt like everybody said they got to have more pieces around him. And Jrue was a big piece, but the greatest development was Giannis. Giannis took a leap this year. And I saw it. It was why (in the) previous two years, he was not my MVP. He was not at the top of my ballot. This year, for the first time, I voted him as the MVP because I saw a guy who didn't just have the physical talent, but he was doing the things that an MVP needed to do.

He was making plays for other people. He was making far better decisions. Offensively, he wasn't afraid to take the shots that needed to be taken in the mid-range. I don't care whether you make it or miss it — you know this — there's a certain rhythm to the game. When you're open and you have that shot, you have to take it because everybody's reacting. "I'm going to hit the boards, because I think the ball's going up." Because he's got a shot. Like, that's instinctive. If you don't take that shot, and now you pass it, suddenly everything’s stopped, and now somebody's got to force a shot up. And now I'm like, "Wait, okay. Is he going to get that shot off?" Like, it screws up the whole rhythm of the game. Giannis started to understand that, he had to get over, "I don't know if I can make the shot or not," to, "I have to shoot the shot and I have to learn how to make that shot at a higher percentage."

Also, Giannis is, what, 6-foot-10, 6-11? [He] long can dominate his position physically at both ends. So for me, it was just a matter of Giannis learning how to play the game, how to basically utilize the physical gifts that he has.

I feel like Damian is... whether it's the logo, expanding his shooting range or just his ability to change speeds, he's getting the most out of what a dude [that's] 6-2, 190 pounds can get. At some point when they put a 6-6 guy on you who can move just like you, that makes the game really challenging.

How much can he be expected to do? I mean, the great ones can still find a way to score, but can I score and get people involved? And can I defend at the other end to that level? That’s where I feel as if Damian would be best served by staying, because he knows that Portland — until he just can't play anymore — they're going to try to reward him by building that team around him. He might find that championship someplace else, but all he has to do is, honestly, I mean, look at like... Giannis doesn't have to do anything ever again. And he will be beloved in Milwaukee for the rest of his life. I would say that Chris Paul in Phoenix, just getting them to the Finals, will be beloved there in a way that he wouldn't any place else.

So for me, it's a matter of, what is it that you want? Do you just want the ring? Do you want to be able to put that on your resume? Or, and I’ll bring it full circle to Brian Grant, he never won a title. But he will be forever beloved in Portland because of the battles with Karl Malone. Because he didn't leave. Yes, he went to Miami, but that was because Portland decided, "We're going to put our chips on Rasheed [Wallace] and we're going to go in another direction." [Brian] connected with the fan base, because they knew his heart was in it with them. And that's what Damian has in Portland. And again, it's like doing the job a certain way, and you can't put a price on that.

Etan Thomas: That's fair. I definitely understand that. And he is somebody who everyone is rooting for, so everybody's trying to see the best way for him to get rewarded. It's not like they're criticizing him. They're saying, "We want him to get to a good place." People have literally been rooting for him since high school, because he always took the road less traveled. He didn't take the easy route. He didn't team up with the power team in high school. He didn't go to the big school for college. He always took the more difficult route, so people respect that, but they want him to be rewarded for it.

Ric Bucher: So that's the other part, too. I feel as if, for him to leave and to leave in order to get a ring, like, that would contradict everything that Damian Lillard is about. And for a guy who's never been to the Finals — and I think has only been to the Western Conference Finals once — the deal that he has with Adidas, Hulu... like, his brand is amazing. And he's earned that, because of how he's perceived and how he's carried himself and that loyalty that he has demonstrated.