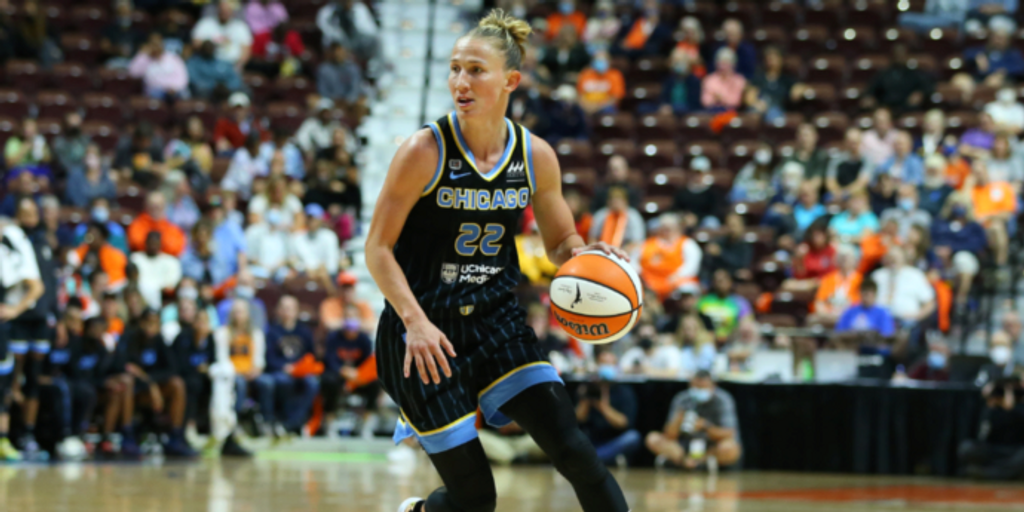 With the win, the Sky were able to both steal home-court and snap the Sun's 17-game winning streak dating back to early July (!!!), while stressing out everybody who watched in the process. This sucker went to double overtime!

(As an aside: while the game was genuinely fun to watch, the Las Vegas Aces enthusiast in me was a bit annoyed that by the time the game ended, the Aces-Phoenix Mercury game had roughly two minutes left in the first half. Can ESPN do us a solid and build in a 30-minute window to space out these WNBA playoff games? Sky-Sun at 7:30 p.m. ET, Aces-Mercury at 10 p.m. ET would've alleviated the issue, if not eliminated it altogether.)

It was a night of balance for the Sky: four of the five starters scored in double figures, while three bench pieces (the overqualified-for-this-role Diamond DeShields, Stefanie Dolson and Astou Ndour-Fall) scored 9 points apiece.

Though Candace Parker had a headliner game — leading Chicago with 22 points, while adding 6 assists, 5 boards and a pair of steals — the star of this one was point guard Courtney Vandersloot. By logging 12 points, 10 rebounds and a ridiculous 18 assists, Vandersloot became the second player in WNBA history to log a triple-double in a playoff game.

Vandersloot is the W's assist maven, the #PointGawdess if you will, through that specific lens. She's everything you want in a passer: instinctive, creative, accurate, protective when necessary. Logging 18 assists while only tallying four turnovers (and only one of those came on an actual bad pass) is pretty nutty.

I think you get my point.

What I want to do is highlight the different ways Vandersloot gets it done as a table-setter, using Tuesday night's historic outing as the template.

(Sadly, even most of the good times from the W don't make SportsCenter, but that's a rant for another day.)

Go through any high-volume assister's film, and it'll be littered with clips of entry passes, transition kick-aheads and swing-swing sequences that are pretty mundane. When you rack up as many dimes as Vandersloot does, that theory holds more than true.

But even in the simple stuff, I find myself impressed with Vandersloot's pass placement, velocity and sense of timing. Take her first dime of the night, for example.

There's nothing particularly fancy about the design; it's a drag screen from wifey Allie Quigley being followed by a flare screen above the break. But peep when and where the pass comes: the ball hits Quigley in the hands at the moment Kaila Charles (No. 3) smacks into the screen. The placement of the pass allows Quigley, a career 39.9% three-point shooter, to flow into a triple smoothly and immediately.

Head coach James Wade draws up some funky stuff after dead balls. The playbook is completely open for him in part because Vandersloot can execute just about anything he can imagine. Imagine my glee when the Sky pulled out a Spain pick-and-roll from the dern sideline.

The design is great in my unbiased opinion. Both Parker and Dolson have shooting equity; that spreads the Sun a bit thin as Vandersloot comes off the screen. The moment Vandersloot recognizes she has two to the ball, she fires a jump-pass to Dolson for the bucket.

If easy openings aren't there, Vandersloot has the mind to create them. Subtle movements, random pauses and the occasional fingerpoint are all weapons at her disposal to make defenders wrong. I love this third-quarter dime from her.

Sun guard Jasmine Thomas is one of the W's best on-ball defenders, and has been for nearly a decade. She's aggressive and slithery across screens. There's a do-your-homework-early element to her game that makes life incredibly difficult for enemy guards.

Vandersloot uses all of that against her on this possession.

Instead of taking the handoff from Azura Stevens, Vandersloot reverses course. Thomas flies out of the play in anticipation of the handoff, forcing Brionna Jones to step out on the perimeter.

Due to the earlier cut from Kahleah Copper, and the general spacing on the weakside of the floor, Stevens is able to roll into a pocket of space with no real help in sight. The short jumper couldn't have been made easier.

The fun passes are the ones that make you audibly gasp, yell profanity if that's your thing (it's not mine) or just yell in general.

There's a badge that's been around NBA 2K for a few seasons now called "Needle Threader." It's exactly what it sounds like: when equipped, it helps a player complete tight-window passes that would normally be deflected and/or stolen if attempted by mere mortals.

Vandersloot has that baby on "Gold" in 2K22, and for good reason.

Look at this nonsense.

The Sky go with "Chicago" action — a pindown that flows into a dribble handoff — to jump-start the possession. Vandersloot gets shut down going downhill, then fires a freakin' dart to a cutting Parker for the layup. I would be pissed if I was Jonquel Jones on this play. What more could you even do there?

That wouldn't be the last time Vandersloot would find Parker in an overtime period. How about this Golden State Warriors-esque sequence from the second OT?

It's the "how do you defend this super elite movement shooter when coming off a screen from a skilled big" question that wrecked the NBA in the late 2010s. The initial action doesn't generate anything, so Quigley hightails it to the left side of the floor.

Parker sets a screen for Quigley. DeWanna Bonner gets caught flat-footed for a literal half-second while tracking the action; that's all it takes for Parker to slip behind her, and for Vandersloot to make a pass any quarterback would be proud of.

The jury is out on if the Sky can rack up two more wins to advance to the Finals. There's some low-hanging fruit for the top-seeded Sun to grab for Game 2, like, I don't know, involving your MVP down the stretch of the game.

For however long the Sky will be available for viewership, treat yourself to the musical stylings of Courtney Vandersloot. You won't be disappointed.