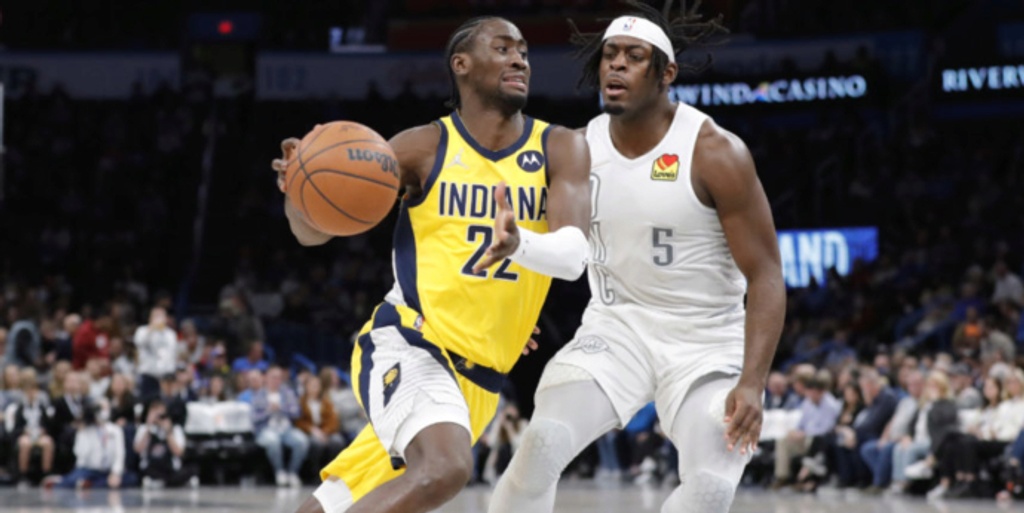 Sporting a 32-21 record and competing at the top of the Eastern Conference, the Cleveland Cavaliers have acquired Indiana Pacers swingman Caris LeVert, a league source confirmed to BasketballNews.com on Sunday evening. The trade was made official on Monday morning.

The deal sends Ricky Rubio, a lottery-protected 2022 first-round pick, a 2022 second-rounder (via the Houston Rockets) and a 2027 second-rounder (Utah Jazz) to Indiana in exchange. ESPN's Adrian Wojnarowski reports a Pacers second-round pick via the Miami Heat will go back to Cleveland.

“We are very excited to add a dynamic young player of this caliber and experience,” said Cavs president Koby Altman. “Caris LeVert fits uniquely into our culture and his Ohio roots brings an immediate connection to our community. We look forward to seeing what type of impact he can make on this roster. We also want to send our best wishes to Ricky Rubio and his family. Ricky has been the consummate professional and his leadership both on and off the court was invaluable and we respect everything he brought to this franchise.”

Spencer Davies and Evan Sidery reacted to this trade for both sides.

A Columbus, Ohio native, LeVert will play a couple of hours north in his home state. This move will also reunite him with Jarrett Allen (and Ed Davis), who was a fellow foundational piece with the Brooklyn Nets prior to the team moving on from both last January in the James Harden deal.

That’s the non-basketball fit, which looks just about as natural as ever. How about the on-floor part of it?

For starters, LeVert is a wing who can definitely create his own shot. Averaging 18.7 points per game on 53% True Shooting, when he’s aggressive, he can get by you. If he gets a sitting duck out on the perimeter in an iso situation, he’s able to weave by and navigate his way through traffic. For a Cavs’ bench unit that’s been thirsting for consistent production and taking the heavy load of Kevin Love’s plate, LeVert could be a godsend in that regard. Simply put, a bucket-getter who attacks and loves the pull-up mid-rangers.

LeVert isn’t burning it down with those shots, however, shooting a paltry 36.8% on his 7.5 attempts per contest. He’s also not a knockdown three-baller by any means, and his shot selection can be questionable in certain moments. But where he does do a solid job is in pick-and-roll situations.

According to InStat, a whopping 34.7% of LeVert’s possessions have come with him operating as the ball-handler in pNr. In his last 10 games, it’s been 43.4%. So if you deduce anything from that, it’s that LeVert operates in a playmaking fashion and has patience with the ball. The Pacers scored 0.99 points per possession in said scenarios, and over those last 10, that increased to 1.07.

Needless to say, with Allen and Love’s ability to use pindowns and high/middle screens — and Evan Mobley could be a great partner for quick slips — LeVert will be asked to do the same things he did with Sabonis, just as a super sub. If you watch the tape on his work with Domas, LeVert really likes to use the middle of the floor and has a right-handed floater that he goes to a lot. Per InStat, LeVert is shooting 54% in pNr situations in that specific zone. LeVert also did a pretty solid job of fitting in pocket passes and looking over the top for Sabonis too.

It’ll be interesting to see how LeVert meshes with Darius Garland. Catch-and-drives should be a plenty for the former Michigan Wolverine. He’s not really a shoot-off-the-catch type of player. He’s more or less crafty, and kind of makes his own offense. You haven’t seen LeVert off the ball much, so maybe J.B. Bickerstaff and Co. will give that a try considering Garland’s wizard-like table-setting could get LeVert opportunities to get to the basket with momentum. (Baseline cuts, anybody?)

Isaac Okoro’s responsibilities shouldn’t be impacted too differently. Lamar Stevens may lose some run; Bickerstaff will always find a way to get that guy on the floor regardless. Figuring out the closing lineups will be a task.

LeVert is going to basically be a blend of the Rubio and Collin Sexton roles, which brings about another interesting question in this: What does the future look like for Young Bull in Cleveland? He’s been traveling with the team, back in the locker room and bringing energy to the wine-and-gold post-surgery. Sexton just switched representation on Saturday to Klutch too.

The Cavs clearly value what he brings to the franchise. Still, the acquisition of LeVert (and possible long-term option) has to arise questions. They are similar players and are going to command quite a bit of money. There’s a Darius Garland rookie-max extension on the horizon to boot. Is there a way Cleveland can keep all of this together?

Who knows. What we do know is that the Cavs are focused on the now, and it’s exciting to see Altman going for gold. Let’s not forget that the team still has a disabled player exception ($3.3M) to play with ahead of Thursday’s trade deadline to bolster the depth of this team. Cleveland’s front office has been anything but bashful in the trade market, and for good reason.

This team when healthy is a load to handle. It’s smart on their part to give up future draft compensation because there’s a boatload of youth on the roster. The Cavs do owe Rubio a debt of gratitude for bestowing his knowledge upon them and, on the floor, helping mature those inexperienced players rapidly. The hope is that moving him after his injury doesn’t rub the locker room the wrong way; while business is business, that group absolutely loved Ricky.

Now bringing Rubio back looks like a longshot. Instead, they addressed a desperate short-term need with long-term thinking, and it cost Cleveland very little to accomplish that. We’ll see how long it takes LeVert to get acclimated.

Indiana has decided to finally push the reset button on their console after waiting far too long to do so.

LeVert will be an instant jolt to the Cavaliers’ bench, but from Indiana’s perspective, this gets very interesting.

Before the Malcolm Brogdon sign-and-trade with the Milwaukee Bucks fell into their lap two offseasons ago, Rubio was reportedly their top free agent target to stabilize their point guard position.

ESPN’s Wojnarowski relayed on Sunday how the Pacers could be in for a full-on rebuild with Myles Turner and Domantas Sabonis being thrown around in trade talks, so this could just be the first domino from Indy’s side to drop down. Although Brogdon signed an extension before the regular season, which makes him ineligible to get moved right now, he’s back on the table this summer.

If the Pacers want to save long-term cap space and flexibility, moving off Brogdon’s deal and re-signing Rubio to a team-friendly deal actually makes a lot of sense. The cupboard is relatively bare right now in Indiana. Outside of 2021 first-round picks Chris Duarte and Isaiah Jackson, seemingly every player is on the table in potential trades.

As seen during his stints with the Cavaliers and Phoenix Suns, Rubio is a calming presence who helps elevate rebuilding teams to higher levels than expected. If the Pacers move off Brogdon this offseason, Rubio ideally steps into the primary facilitating role while uplifting an extremely young and different foundation in Indiana.

LeVert was a solid dice roll to gamble on from the Pacers’ perspective. After Victor Oladipo let it be known he wouldn’t sign a long-term deal in Indiana, LeVert was a capable flier who could maybe fit into their long-term vision.

Now, with Sunday’s breaking news, we know how the Pacers felt about that possibility. The trade rumors are not dying down anytime soon in Indiana. If anything, this only strengthens the idea of a full-blown rebuilding effort about to take place for an organization long overdue for this strategy.