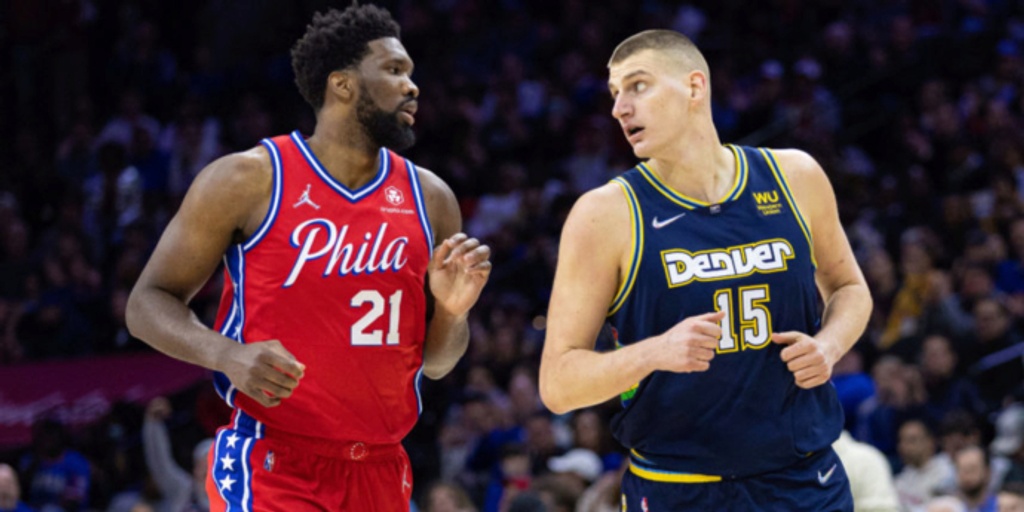 We've seen recent pushes for Devin Booker (and to a lesser extent, Jayson Tatum) to get MVP love; Pascal Siakam is making a compelling case for an All-NBA forward slot, while his rookie companion Scottie Barnes is, at worst, making a serious push for Rookie of the Year. The Defensive Player of the Year award competition seems very much in the air right now.

These conversations fluctuate between fun, informative, nauseating and flat-out toxic — please check any and all xenophobia at the door, for example — but the conversations happen for a reason. We're watching (and hopefully enjoying!) the best men-ballers in the world, and want them to be rewarded for their excellence. It's a status thing, as well as a legacy thing, once you zoom out to Hall-of-Fame or GOAT talks.

As someone who doesn't have a ballot (email me whenever you're ready, NBA), I generally love digging into the awards. On the flip side, my level of care for it leads to frustration. While it would be unrealistic and unwise for everyone to follow the exact same rubric, the lack of consensus from the league and/or voters on key factors can get bothersome.

Heading into the final two weeks of the season, I have a few questions that I think the voting pool should come to a general understanding on, even if the selections themselves differ.

HOW AVAILABLE DO PLAYERS NEED TO BE?

Before digging into specific award questions, I don't think there's a more pressing issue than this one. The combination of injuries and COVID absences have ravaged the NBA over the past couple of seasons. It's hard to blame a player for missing games due to either, but you have to split hairs once award time comes.

I think the voting choices could be made a little easier if there was a baseline expectation in terms of games played or minutes played. For my personal, fictitious ballot, I filtered for 70% of games played last season. I dropped that threshold to 60% this year in light of how wild the absences were at the beginning of the season.

Whatever the marker is — 50 games, 2,000 minutes — having something objective in place to limit the pool off rip could be beneficial.

"Voter X" doesn't hate your team and shouldn't get death threats in their DMs; your favorite player simply missed half the season. Sorry!

WHAT TO DO ABOUT NIKOLA JOKIC AND JOEL EMBIID?

The MVP conversation is exhausting enough; they're both worthy candidates for different reasons. It would not — NOT — be a "robbery" if Embiid beats out Jokic, or if Jokic beats Embiid. You can disagree, but they've been two of the top three players in the league all year long.

The more pressing concern comes with All-NBA voting. As mentioned, Jokic and Embiid have been two of the top three players in the league this season. They also play the same position (center); more importantly, that is the only position those two have played.

I don't love Basketball-Reference's position estimates because they seem to be height-based more than role-based, but it's telling that Embiid and Jokic have played 100% of their minutes at the 5 by their tally. That number was at 99% for Jokic last season, but reasonable folks are not giving Jokic the forward/center designation because he played 37 seconds with Bol Bol.

But yet, here we are, with Jokic and Embiid being eligible at forward for All-NBA voting.

Small note: I’m told that both Nikola Jokic and Joel Embiid will be eligible at both forward and center on the All-NBA vote.

So both players can make first-team.

On the surface, it's a welcome loophole to give both players the First Team selection they deserve. Zoom in even a small percentage, and you'll see that it's a level of fudging that royally screws a forward on the third team. The debate then becomes: Has the NBA's fourth-best center (Rudy Gobert?) been better than the NBA's sixth-best forward (Siakam? Jimmy Butler?). And... probably not? But that shouldn't be the discussion to begin with.

I know, you know, we know that Jokic and Embiid are not forwards in the slightest. If you want to get into the role-played discussion, why is Jokic more of a forward than a guard? Explain it to me like I'm 5.

If you have Jokic over Embiid for MVP, you're admitting Embiid has been the second-best center in the NBA. The inverse is true if you're voting for Embiid. There are some positional gray areas to sort through this year (hi DeMar DeRozan and Luka Doncic); there is no debate about what position Jokic and Embiid play.

The real solution here is for the NBA to change the ballot, either going completely positionless or using the All-Star game format (two backcourt, three frontcourt). I've seen a middle ground mentioned — two backcourt, two frontcourt, one wild card — and I'd be cool with that.

Until then, my take is to make the tough choice. One of Embiid or Jokic should be the Second Team center — because they're centers.

HOW MUCH SHOULD DEFENSE MATTER FOR ROOKIE AWARDS?

This has been heavily debated due to the outlier (at least until recently) production of Cleveland Cavaliers big man Evan Mobley.

In years past, Rookie of the Year has mostly been the "who has the best per-game stats" award. Naturally, guards (or wings) have the leg up because they have the ball in their hands; Blake Griffin (2011) and Karl-Anthony Towns (2016) are the only bigs to win the award in the last 15 years.

Mobley has a good enough case with numbers — roughly 15 points and 8 rebounds with 2.5 stocks (steals plus blocks) is nothing to sneeze at — but the foundation of his case has been what he's been able to do on the non-glamour end.

He hasn't just been rookie-good; he's made a legit All-Defense case for his work this season. There's been slippage as of late, a natural byproduct of the team falling apart around him (bye Jarrett Allen), but his unique skill set unlocks a lot of what the Cavs have done from a scheme perspective.

While acknowledging that Mobley gets fair usage as an elbow or handoff hub, it's still fair to dub him as a play-finisher. That's in contrast to Barnes, who's had to wear a multitude of hats offensively, and the show-running that Cade Cunningham has assumed in Detroit (with the worst roster context among the serious ROY candidates).

It's become a sort of fundamental debate: Do you value the on-ball responsibility or the defensive aptitude more?

I don't like that question — too broad for my taste — but I'd like to get to a point where the defense is factored in, period, before getting to where it's valued in relation to that.

(As an aside: On March 14, I tweeted that I didn't see a real case for a non-Mobley guy to win the award to that point. Barnes has thoroughly shut me up in that time frame; 16-7-5-1-1 while taking on a multitude of tough defensive assignments is pretty darn impressive. Toronto's 6-2 record helps too. I'll take my L.)

WHY CAN'T JA MORANT WIN THE MOST IMPROVED PLAYER AWARD?

This was a question born from a Twitter Space held by the Basketball News staff on Friday. There seems to be a pretty common sentiment that a player of Ja Morant's stature — an All-Star, easy All-NBA candidate and fringe MVP candidate — has been too good to win Most Improved, especially within the context of his draft selection.

I'm not saying Morant would be my choice; to be transaparent, I had Miles Bridges as my front-runner when discussing this on The Dunker Spot (subscribe!), and I want to take the next week or so to solidify my selections.

But the logic doesn't track for me. If the award is "Most Improved", the criteria should be "who improved the most." If the answer if Morant, who has taken substantial statistical leaps and has improved in virtually every area of his game, why should he be disqualified off rip?

If the spirit of the award is "who made the most unexpected leap", then I'd like for that to be agreed upon and carried out moving forward.