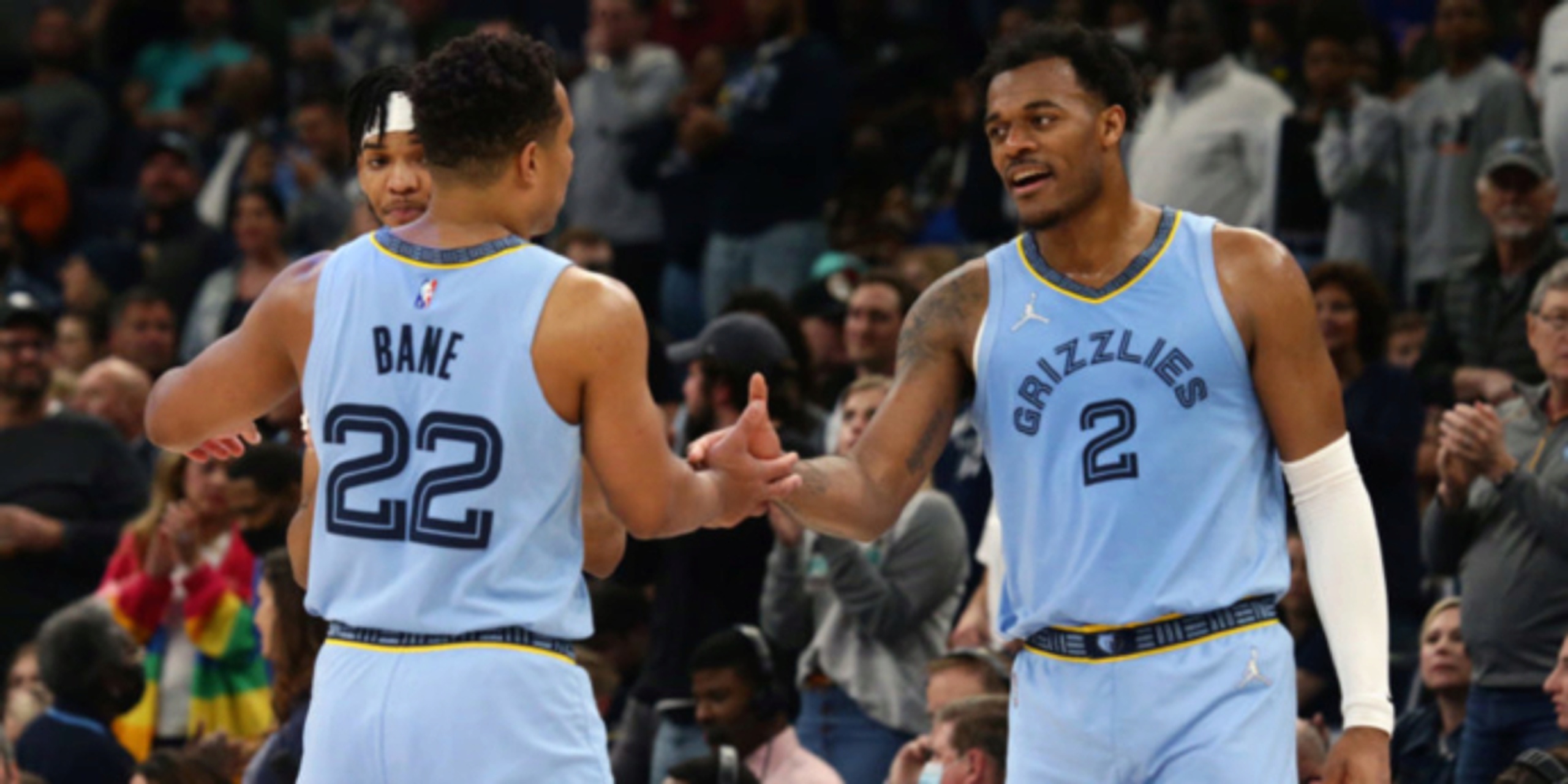 MEMPHIS, Tenn. (AP) — Desmond Bane scored 22 points, De’Anthony Melton and Dillon Brooks added 21 points each and the Memphis Grizzlies solidified their hold on second place in the Western Conference with a 123-95 victory over the short-handed Golden State Warriors on Monday night.

Kyle Anderson added 13 points for Memphis, which holds a five-game lead over the third-place Warriors in the conference. The Grizzlies won their fifth straight and for the ninth time in 10 games. Bane and Melton were key, as they were in Saturday’s win over Milwaukee, combining to go 10 of 15 from 3-point range.

“We all tell both those guys to keep shooting because it opens up the floor for us,” Brooks said. “That’s the way we are built, and it’s fun to play. It’s fun to watch.”

That put the Warriors in an unfavorable position facing the Grizzlies, who were without leading scorer Ja Morant, who missed his fifth straight game with right knee soreness, and Jaren Jackson Jr., who sat with right thigh soreness.

But Memphis has played well in Morant’s absence, winning the previous four after Morant was injured.

The game opened with both teams struggling on offense.

“I thought we didn’t have our footing in that first quarter,” Memphis coach Taylor Jenkins said. “A little sloppy.”

Neither team was shooting well to start, and Memphis was a step slow to 50-50 balls. The teams combined to make only 13 of 45 shots in the first quarter.

Both were still mired at 25% each early in the second quarter before scoring started picking up — for Memphis.

“We obviously started a little slow,” Warriors assistant coach Mike Brown said after the game. “(The Grizzlies) were a lot more physical than us in the first half. We didn’t compete at the level that we felt we needed to coming into their building.”

The Grizzlies shot 59% in the second, including making 4 of 6 from beyond the arc. With the Warriors still stuck at 25% shooting, Memphis outscored the Warriors 43-21 in the second and held a 63-37 lead at the break.

By the end of the half, Warriors coach Steve Kerr vehemently argued a no-call on the final play and was assessed two quick technicals, getting ejected for the second half as Brown took over the bench duties for Golden State.

Poole helped the Warriors cut into Memphis’ lead slightly with 13 points in the third, but Golden State never got within less than 18 points. Memphis carried a 95-67 lead into the final quarter.

“That type of deficit is hard to overcome when you have all of your main guys,” said Brown, who praised his team for its second half play.

Kerr became very animated at the end of the half and let the officials know he was unhappy with their calls. And the two technicals came in rapid succession. Center Kevon Looney said he was walking toward the locker room when Kerr erupted. “I seen Steve going crazy,” Looney said. “I know once he goes there, there ain’t no stopping him.”

Warriors: Finished five-game road trip 1-4. … Looney is the only Golden State player to appear in all 76 games this season and started his 74th on Monday. … Poole has reached the 20-point mark in 14 straight games. … Are 8-5 in the second game of a back-to-backs this season. … G/F Andre Iguodala, who has missed 49 games this season, including the last 21 with low back tightness, returned to action, playing 16 minutes and scoring six points.

Grizzlies: Have scored at least 120 points in eight of their last 10 games. … Melton is now 27 of 45 from 3-point range over the last six games. … F Brandon Clarke, who missed the last game with left hip soreness and was listed as questionable before Monday night, returned to action and scored 12 points.

Grizzlies: At San Antonio on Wednesday.