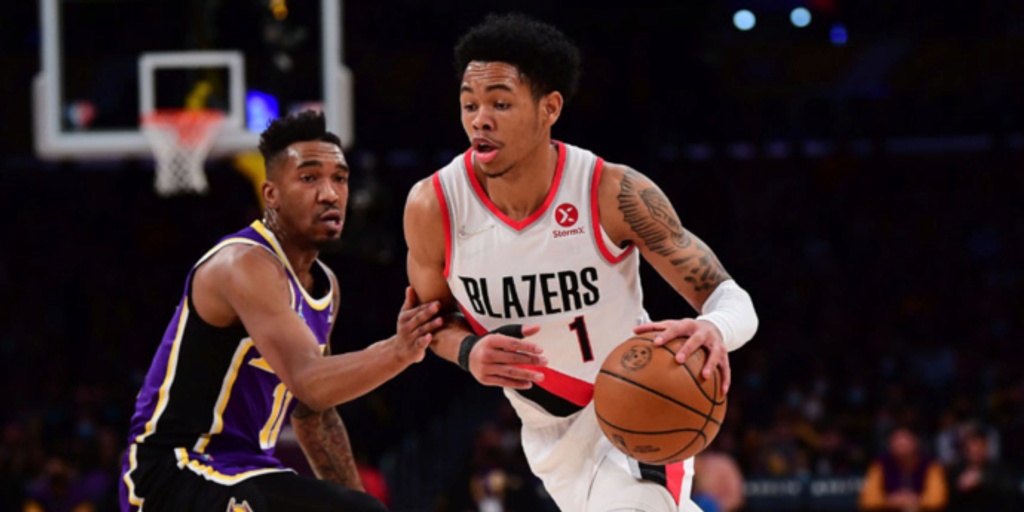 This season hasn’t gone as planned for the Portland Trail Blazers.

Entering the campaign, the Blazers were hoping to be one of the Western Conference’s top teams. With new head coach Chauncey Billups and a veteran-laden roster, Portland hoped to continue their eight-year playoff streak and go on a deep run in the postseason. To get an idea of how Portland was perceived last summer, recall that Larry Nance Jr. asked his hometown Cleveland Cavaliers to trade him to the Blazers because he wanted to join a contender.

Now, at 27-48, Portland has the 12th-best record in the West. The Blazers currently sport the NBA's 25th-ranked offense (scoring 106.3 points per 100 possessions) and 29th-ranked defense (allowing 113.3 points per 100 possessions). And after trading away vets such as CJ McCollum, Norman Powell, Robert Covington, Tony Snell and Nance, Portland seems headed for the NBA draft lottery for the first time since 2013.

Throughout this disappointing season, there has been an undeniable bright spot for the Blazers: Anfernee Simons. The 22-year-old took the next step in his development and proved that he was ready to take on an increased role. His emergence is a big reason why Portland’s front office felt comfortable trading away McCollum and Powell prior to the deadline.

During his first three seasons in the NBA, Simons had just five games with 20 or more points. This season, he did it 19 times despite only playing 57 games. (He’s been ruled out for the remainder of the season due to patellar tendinopathy in his left knee).

Anfernee Simons🔥 🐜
In the win vs Trae & the Hawks

On Jan. 3, he had a 43-point, 9-three, 7-assist performance to defeat the Atlanta Hawks. Last month, he helped the Blazers upset the Milwaukee Bucks and Memphis Grizzlies in back-to-back road games, finishing with 31 points and 6 assists in both contests. Portland was 7-1 when Simons scored at least 29 points this season.

“They believe in me. They think I'm a great player and I can help them win,” Simons told Marc Stein. “It's crazy how stuff moves pretty fast in the NBA — just being prepared when my opportunity was presented and taking full advantage of that. And I think I've been doing that. I gained the organization's trust. For them to make these moves just shows that they believe in me and want me to succeed.”

Simons’ huge strides have him being mentioned as a potential candidate for the Most Improved Player award. If he wins, he would become the fourth Blazer to win Most Improved, joining CJ McCollum (2015-16), Zach Randolph (2003-04) and Kevin Duckworth (1987-88). LaMarcus Aldridge finished as the MIP runner-up twice (in 2007-08 and 2010-11), but he came up short to Hedo Turkoglu and Kevin Love, respectively.

“I think I put myself in a good position to at least be nominated for it — to at least be in talks for being Most Improved,” Simons told Stein. “But I can't control who picks who, so I'm just going to continue to work hard on trying to get better.”

Simons acknowledges that he still has plenty of work to do, and he knows what aspects of his game he wants to hone next.

“[I] just want to continue to get better at playmaking — continue to see the floor better — and work on finishing around the rim and getting fouled,” Simons told Stein. “A lot of the great players know different ways to draw fouls.”

It’ll be interesting to see how Coach Billups utilizes Simon and Damian Lillard together next season. This season, Simons didn’t move into Portland’s starting lineup until Lillard was sidelined due to an abdominal injury that required surgery. In the 27 games in which they both suited up, Simons came off of the bench and his role was limited, averaging 12.1 points, 2.4 rebounds and 2.0 assists. How will they fare when both players are in the starting lineup?

"I think we complement each other well… We're gonna be a hard backcourt to navigate and guard because we're both threats in the pick-and-roll, making plays and scoring the ball,” Simons told Stein. “Teams are going to have to choose who they want to blitz.”

Lillard is nearly a decade older than Simons and he has emerged as the young guard’s mentor in recent years. Simons has learned a ton from watching Lillard — on and off the court.

“I've been watching him my whole career, so I've picked up on things he does. He's probably one of the most humble dudes I've ever met — especially with the success that he's had,” Simons told Stein. “He walks around like he's a normal person. Each and every day he's always giving people confidence and encouraging people. Just to see that firsthand and see how he works and what he puts into being who he is, it's amazing to see. He's my vet. He's been helping me my whole career and I'm very grateful to have him as a teammate.”

While Blazers fans would love to forget this frustrating season, at least some good came out of this campaign, with Simons beginning his ascent to stardom and putting the league on notice.