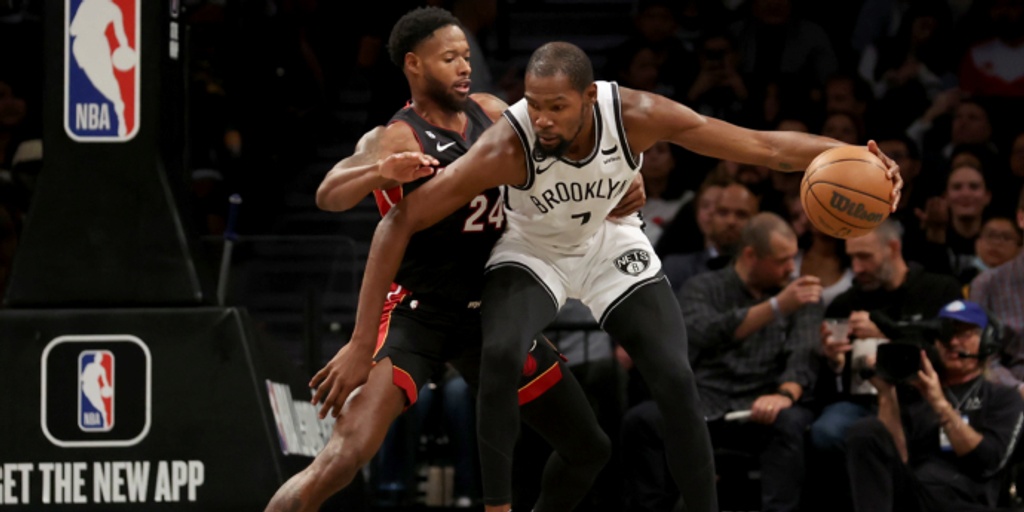 What stands out to you about this possession?

If your eyes immediately go to Nikola Jovic — a skilled seven-footer that the Miami Heat are pretty excited about — initiating the offense, I wouldn't blame you.

If you're a stickler for process, it's fair to point out that the first action of the possession — a pitch to Marcus Garrett before flowing into a ball-screen — taking nearly 15 seconds to occur is less than ideal. It leads to Garrett trying and failing to beat Xavier Tillman off the bounce after forcing a switch, which then calls for Jovic to save the possession with a(nother) deep three.

But look at Haywood Highsmith.

While the Heat take their precious time getting into the possession, he's calling for Garrett to move closer to the right wing so his help defender can't park at the free-throw line. Spacing is the name of the game, and Highsmith has a strong understanding of it. 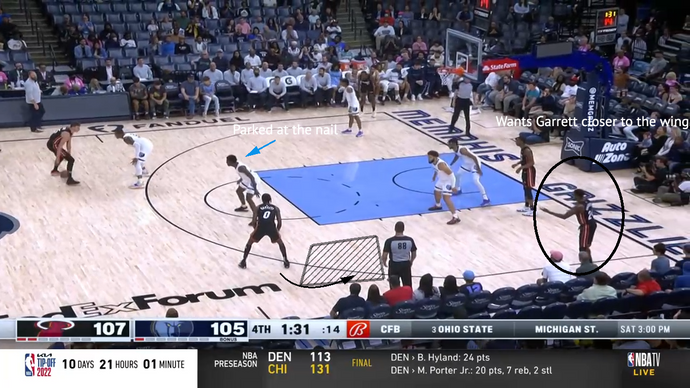 Highsmith lifts to the right wing while the ball-screen happens, then retreats back to the corner once Jovic receives the ball. And while his defender, David Roddy, stares down the late-clock iso from Jovic, Highsmith loops into the paint in anticipation for the shot. 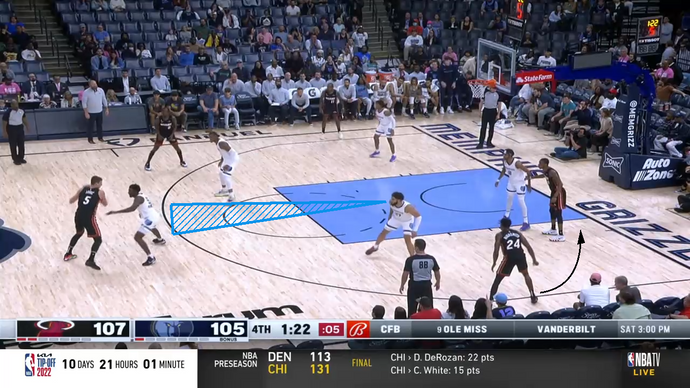 Sure enough, the shot clanks off the right side of the rim. By doing his homework early, by remaining active off the ball, Highsmith goes from spacer to glass-cleaner before anyone can put a body on him. Two-possession game.

Highsmith continues to fly under the radar. You can track it back to his family; he's technically a junior, with his father — Haywood Highsmith Sr. — carving out a prolific college career in his own right.

"First and foremost, my parents were very supportive of me over the years," Highsmith told Basketball News during a phone interview. "My father grew up playing basketball; he was a Hall-of-Famer in college, so I basically learned the game from him."

The younger Haywood would have productive college career of his own. He shined at Wheeling University, a Division II school, starting three of his four years there. As a senior, Highsmith averaged 22 points (60.9% from two, 40.5% from three), 12.5 rebounds, 3.0 assists, 1.9 steals and 1.8 blocks.

It's been work since then. A two-way deal with the Philadelphia Sixers here; a two-year stretch in Germany there; G League reps in the interim. Highsmith has had to cycle through teams, schemes, roles and countries. But that amalgamtion of experiences has prepared him for this Heat run.

“I don't view him as a young player," Heat head coach Erik Spoelstra said after Friday night's win over the Memphis Grizzlies. "I understand he doesn't have an extensive NBA experience — but he's played some very good basketball in the G League. He has had to grind and earn everything and every opportunity that he’s been given. He just continues to get better each year.

"He has also contributed on some very good winning teams in the G League, and he has been one of those glue guys for those teams. [That] was one of the things that appealed to us about him — and it was the fact that he makes winning plays and contributes to winning — and it does not necessarily always show up in the conventional box score. But he defends, has a knack for the ball [and] he is very good in the system."

The biggest question surrounding the Heat entering this season has been some variation of, "Who starts alongside Bam Adebayo in the frontcourt?" We've seen Caleb Martin, another diamond-in-the-rough find, get reps at the 4. Adebayo himself has played the 4 alongside Omer Yurtseven. It probably won't be Jimmy Butler, who jokingly-yet-seriously shut down the prospect of it in training camp.

Keep an eye on Highsmith, once again flying under the radar. He's coming off of a productive showing at NBA Summer League where he was tasked with defending all over the floor, canning triples and occasionally keeping the offense flowing as a driver.

During preseason play, he's been sliding across the positional scale defensively. He saw time against Bryn Forbes (movement shooter), Austin Rivers (wing scorer), Taurean Prince (spacer, close-out attacker) and Eric Paschall (versatile 4). Against the Brooklyn Nets, he spent time against Kevin Durant and Ben Simmons. On Friday night against the Grizzlies, he saw time against Dillon Brooks, Ziaire Williams and even Xavier Tillman.

He didn't always fare well against those matchups, but he offers the archetype — rangy, active, physical, willing — that the Heat want if they decide to go smaller again.

Highsmith recently spoke to Basketball News about his qualifications at the 4, his influences as a player, what he's worked on this summer and more.

(This interview has been lightly edited for clarity.)

How would you describe your game to someone who isn't familiar with you?

Haywood Highsmith: "I'm just a versatile basketball player. I don't really have a set position; I'll go out there and play whatever the team needs me to play. It starts with defense, being able to guard multiple players. Offensively, I'd say I'm a good shooter, an underrated passer. I'm just a guy that does a little bit of everything on the floor — and plays hard."

I was going through some of your college and overseas film, and it looks like you have somewhat of a post game too. Do you feel like that's something you can utilize if opponents stash smaller players on you?

Highsmith: "When I was in college, I was a Division II player so I faced some smaller players from time to time. I was pretty dominant in the post with a right hook, spins and stuff like that. I was kind of a big man in college; now that I'm in the pros, I'm more of a hybrid. When I get mismatches, I could definitely use some of the moves I used to do back in my earlier days — take advantage of my size and length and get good shots against smaller opponents."

Since you've been in the NBA, who are some players you've drawn from or learned from?

Highsmith: "When I was in Philly (2018-19 season), I did talk to Jimmy [Butler] from time to time. Obviously I'm with him now, so I've been able to learn more from him. With the Heat last year, P.J. [Tucker] taught me a lot about playing hard, doing the little things while on the court; you can affect winning in different ways.

"In the G-League, I'd say Shaq Harrison. He's been around the NBA for a minute, played for the Bulls — he's a really good player. Guys like that, you can a learn a lot from. They've been playing longer than me, and they have more knowledge than me as well."

You've discussed your dad playing on the college level. How has that shaped your game?

Highsmith: "My dad has been supporting me since I was a kid. I knew I'd grow up to play basketball; he played, we're both very tall. He pushed me to develop skills beyond what he had. He tries to tell me things I could do better; sometimes I listen, and sometimes I don't (laughs). I feel like I'm learning more on this side, but sometimes he does bring up good points."

Whenever you do pour over game tape, what are the kind of things you look for?

What's a specific area of your game that you looked to improve this past summer?

Highsmith: "Obviously, it starts with being in the best conditioning as possible. I feel like the Heat have really helped me with that. I've been with them all summer.

"Beyond that, I've worked on my ball-handling and being more consistent with my shot. I worked with Rob Fodor, the Heat's shooting coach. He's a really good guy, and has had me working on different things with my jumpshot. So, it's been a blend of skill work and getting in great shape."

On the jumper, have you made any tweaks to it, or has it been more about getting reps up?

Highsmith: "It's about having a one-motion jumper for me. I have to make sure I don't hold the ball up top. I want to have one fluid motion with my jumpshot."

Last question for you. You've played D-II, played overseas, played in the G-League, and you have some NBA experience. What are some of the stylistic differences that you've seen across those leagues?

Highsmith: "Overseas, it's obviously a more physical game. I think the defense is harder because there's more ball movement.

"In the NBA, the players are more talented so the stars have the ball in their hands more. Overseas, they move the ball around. There are a lot of good passers. Some of the big men can really shoot, and can also pass the ball really well.

"But with the NBA, G-League, overseas, D-II — it's all just basketball at the end of the day. There are different levels and different skill sets; obviously, I had to make an adjustment coming from playing D-II. I was probably the best player on the court every practice, every game. When I came to the pros, I had to change spots. I had to learn how to adjust and find my niche. I feel like I've done a good job of that, being able to play alongside different types of players. It's different everywhere, but you just have to be able to adjust and adapt to different styles."

Actually, one quick follow-up before I let you go. You mentioned the physicality overseas and, at least when I watch, there seems to be more of an emphasis on big-man play. Do you feel like there's less switching overseas? What are the differences in defensive schemes?

Highsmith: "Yeah. When I was overseas, a lot of teams would hedge on ball-screens. You'd have to be able to hit the short-roll with a pass, or swing a pass to the opposite wing so that guy could hit the player rolling.

"When I got over there, they asked me to hard hedge, which I'd never done before. It was hard for me to learn at first. But as I grew, they recognized that I was better at switching because I could guard multiple positions. It didn't make much sense for me to hedge and try to recover back to my man. I feel like switching is very easy to do, especially compared to something like hedging."