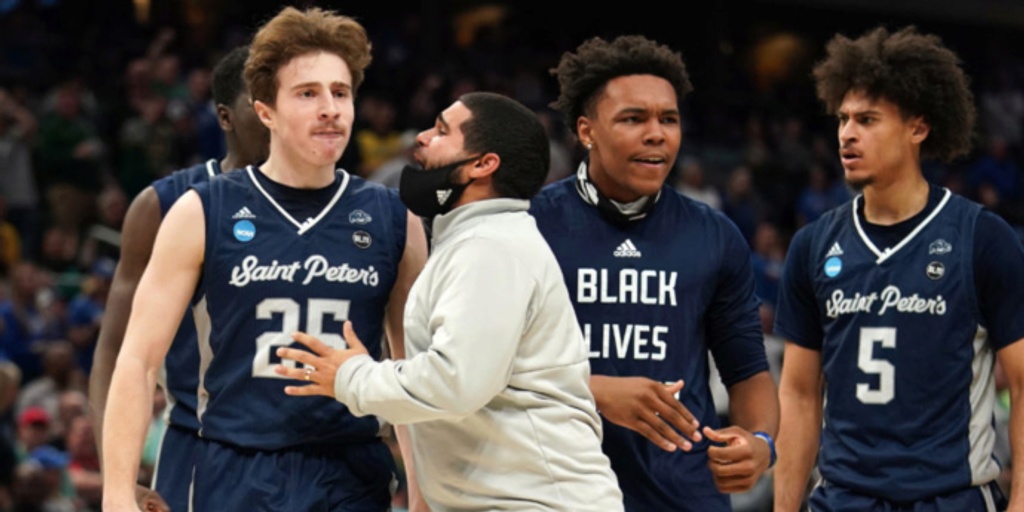 Deep down, everyone knew.

All of you knew once you finalized your picks: The half-ass research, the questions to your even less knowledgeable friends, the “expert” analysis – none of it was going to matter. Your bracket was going to be busted by the end of the night. You didn’t know how, you didn’t know by whom, but you had an idea that even on day one of the men’s NCAA Tournament, your bracket would get cooked.

You probably just didn’t know it would be by Saint ******* Peter’s University – against Kentucky, at that – who won 85-79 in overtime, destroying the evening of bracket-builders, parlay-players and spread-bettors alike.

If you don’t know, Saint Peter’s is a private Jesuit school in the middle of Jersey City, New Jersey. And if you’ve ever been to the campus, you'd be even more surprised by this upset. Depending on who you ask, Saint Peter’s could have either 2,300, 2,600, or 3,500 students; either way, we know the University of Kentucky likely has 10x that, if not more.

The gap actually has nothing on the wage disparity between each team’s head coaches. John Calipari reportedly banks in $8.5 million annually from Kentucky, which doesn’t included bonuses of any kind. Shaheen Holloway was hired as Saint Peter's head coach in 2018, and he reportedly made less than $270,000 (including bonuses) in 2019. That means Coach Cal is paid 30x more than Coach Holloway before his first bonus check.

St. Peter's men's basketball coach Shaheen Holloway made $266,344 in 2019, including bonuses paid and value of benefits, per school's most recent federal tax dox.

John Calipari's basic pay from UK for this season -- not including bonuses, benefits and perks -- is $8.5 million.

More on the financial side, a Yahoo Sports report says, “In the 2019-20 school year, the most recent season unaffected by COVID-19, Kentucky outspent Saint Peter’s $18.3 million to $1.6 million in men’s basketball, per the U.S Department of Education. In terms of both expenditures ratio and raw difference between budgets, that is the biggest disparity since 2007, as far back as data is publicly available... Kentucky outspends Saint Peter’s in basketball by a multiple of 11.7, just edging out the 11.5 ratio from CJ McCollum and Lehigh’s win over Duke exactly 10 years ago.”

Furthermore, Kentucky reportedly spent over $138 million for its sports teams in 2020. Saint Peter’s? Only $7.2 million.

We’ve watched the University of Kentucky become a factory for producing countless pros. And it's not just the high-level NBA stars we see thriving in the league today like Anthony Davis, Devin Booker, Bam Adebayo and Karl-Anthony Towns. On opening night of the 2021-22 NBA season, Kentucky had 27 alums on rosters around the league. In their history, they’ve had 125 players appear in the NBA – a number that's sure to increase following the 2022 NBA Draft. The Wildcats have potential 2022 lottery picks in TyTy Washington and Shaedon Sharpe, and a possible late-first-rounder in Oscar Tshiebwe, among other expected NBA prospects.

Kentucky has the most wins, highest winning percentage, second-most national titles, most national-title-game appearances (tied with UCLA), most NCAA Tournament appearances, most first-round draft picks and most NCAA tournament wins.

By the way, how many NBA players came from Saint Peter’s program? Four. Just four.

Four is also the number of NCAA Tournaments that MAAC Champion Saint Peter’s has made in their history, with zero victories until last night. Their 85-79 win over Kentucky nuked all your hopes of a perfect bracket, and simultaneously reminded us why March is one of the best sports months on the calendar.

This only marked the ninth time in tournament history that a No. 15 seed knocked off a No. 2, and all of them have happened since 1991, including Oral Roberts taking down Ohio State – also in overtime – just last year. This one, because of the distinctions between the two institutions both in size, recruiting advantages, budgets and basketball history, could be the biggest upset we’ve ever seen.

People love blue-blood programs, and in the case of Kentucky, love to hate them. But this is why people gather around TV screens this time of year, to see improbable stories like these unfold.

Others say they want the best facing the best with no upsets, and that’s cool, but where’s the enjoyment in that? If you only watch basketball for “starzzzzz” and “hooperzzzzz,” this probably doesn’t excite you, but if this level of improbability can’t resonate with you, why? That’s strange. The fact is, in life, more people can and should be able to identify with the Saint Peter’s element of this. Chances are, if you’re reading this, you’re closer to them than Kentucky, and that’s OK. So don’t be disappointed that Kentucky blew it. Embrace the uncanny underdog Peacocks from Jersey City, led by their badass head coach from New York City, who reminded you after the game, that it’s just ball after all.

Q: “Did you ever get nervous.”

Shaheen Holloway after No. 15 Saint Peter’s upset No. 2 Kentucky in OT

“For what? It’s basketball.”