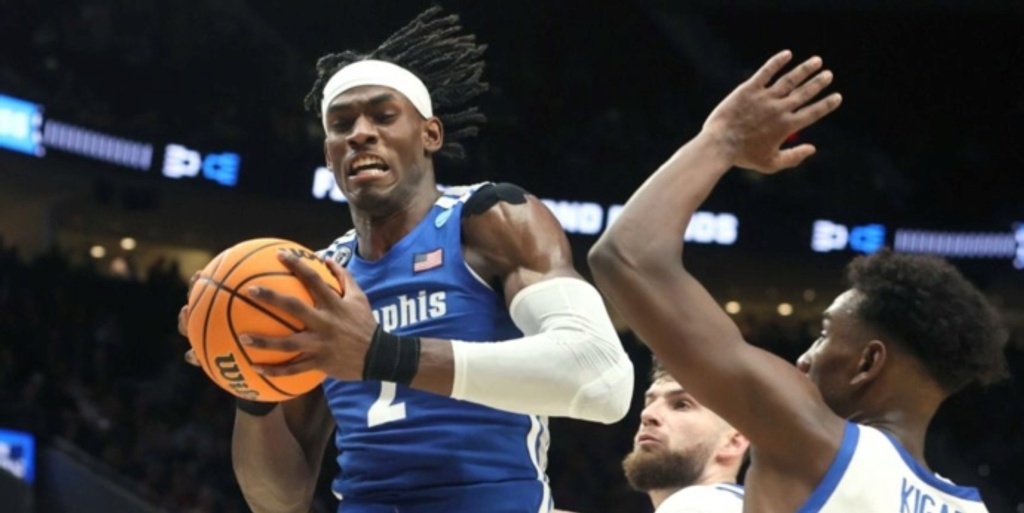 We made it through the first day of March Madness! Sixteen teams saw their dreams shatter while the other 16 teams advanced to the Round of 32. Let’s see who remains…

Starting with the true bracket buster of day 1, the Saint Peter’s Peacocks upset the Kentucky Wildcats. Oscar Tshiebwe gave everything he had (as expected) with a 30-point, 16-rebound performance, but Kentucky’s perimeter players (TyTy Washington, Kellen Grady and Sahvir Wheeler) had trouble generating offense. The Peacocks shined behind Daryl Banks III’s 27 points and Doug Edert’s 20 points off the bench. The game remained tight the whole way through, staying within six points, and the game was tied at the end of regulation. The Metro Atlantic Athletic Conference champion pulled away with clutch plays and defensive stops that showed they weren’t afraid of the highly decorated program. Saint Peter’s will be taking on the 7-seed Murray State on Saturday. (For more on this upset, check out Bryan Fonseca's article).

The annual bracket experts are well aware that the 12-5 matchup is always on upset watch, but since Iowa had a strong run for a Big Ten Tournament championship and one of the top NBA Draft prospects in the tournament in Keegan Murray, they felt like the pick here. But Richmond reminded the country that they too won a conference tournament championship last week and the Atlantic 10 knows them very well. Senior guard Jacob Gilyard played all 40 minutes and gave the Spiders 24 points, 6 rebounds and 6 assists. Junior forward Tyler Burton and senior forward Nathan Cayo added 18 points and 15 points, respectively. Iowa’s projected lottery pick Murray finished the game with 21 points and 9 rebounds, but there was a lull in his offense in the second half that could’ve been the difference-maker. Richmond will face 4-seed Providence in the second round.

In a matchup that many thought had upset potential, the Wolverines came away as victors over the Rams after a slow start. Colorado State jumped on Michigan in the first half and led by as many as 15 points, but Michigan proved their Power 5 experience had tested them enough to overcome the deficit. Hunter Dickinson ended as the game’s leading scorer with 21 points and added 5 rebounds and 4 blocks. Frankie Collins filled in at point guard for the injured Devante’ Jones and finished with a respectable 14 points, 6 rebounds and 2 assists. Michigan finds 3-seed Tennessee waiting for them in the next round.

New Mexico State grabbed another win for the 12 seeds today as they knocked out UConn in the first round. This game was owned by Aggie guard Teddy Allen, who was locked in after starting the game 0-for-6 and finished with 37 points. New Mexico State as a team shot nearly 65% from three, which proved to be the difference-maker, with the Huskies only hitting 30% from deep. Allen looks to add another hot performance to his March Madness resumé on Saturday against Arkansas.

GAMES OF THE DAY

The Memphis Tigers continued their strong play in the latter portion of the season and finished with a big win against Boise State. Memphis went into halftime with a 19-point lead, but a slow start by the Tigers led to the Broncos clawing themselves back into the game. DeAndre Williams ended the game with 14 points while projected NBA Draft lottery pick Jalen Duren had a 10-point, 11-rebound double-double. NBA executives and March Madness fans are getting the Duren-Chet Holmgren matchup they’ve been clamoring for since Sunday night, as Memphis takes on Gonzaga this weekend. (This game also featured a surprise cameo from Emoni Bates, who finished with just 3 points in three minutes).

If you stayed up to watch one of the nightcap games of day 1, you probably watched Murray State and San Francisco battle it out. This game saw San Francisco guard Jamaree Bouyea score a career-high 36 points including some big shots to extend the game. However, it wasn’t enough for the balanced attack of  Murray State’s KJ Williams, Trae Hannibal, Tevin Brown and Justice Hill with scoring totals of 18, 18, 17, and 15 (with Hannibal’s 18 coming from the bench). The Racers' next test comes from the “bracket busters” themselves, the Saint Peter’s Peacocks this weekend.