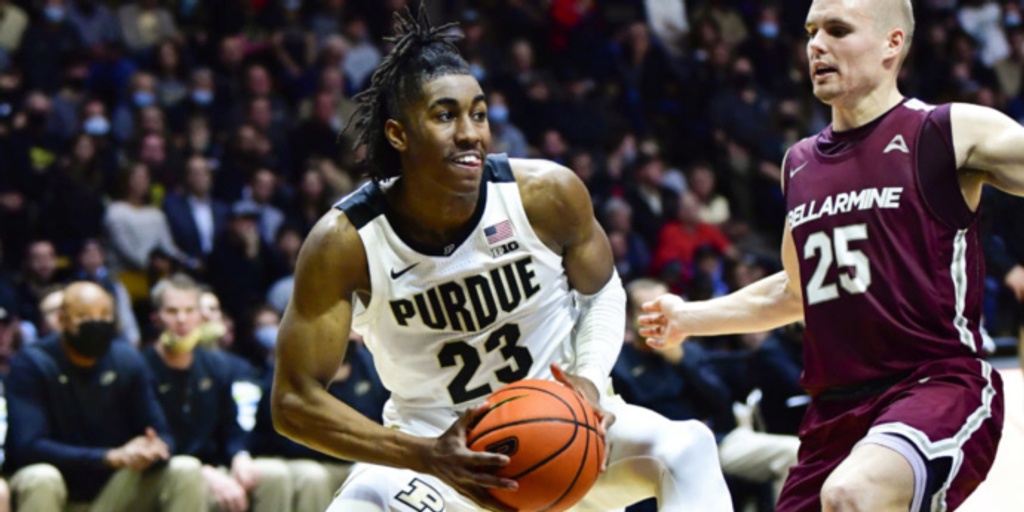 Ivey is a great athlete and relentless defender who has flashed elite potential on that end of the floor, while also displaying the ability to create space for himself and score on multiple levels. Entering this season, he was a popular pick to break out with the Boilermakers and, five games in, he's doing just that.

As a freshman last season, Ivey made his presence felt quickly as a spark plug off the bench. Then, slowly but surely, he forced his way into the starting lineup. As a starter, Ivey averaged 14.8 points, 4.0 rebounds and 2.4 assists per game. He recorded a season-high 26 points in the first round of the NCAA Tournament, but 13th-seeded North Texas still managed to pull off the upset over Purdue. Ivey was inefficient as a freshman, shooting just 39% from the field and 25% from three-point range. Still, his two-way contributions earned him a spot on the Big Ten All-Freshman team.

Ivey carried this momentum into the offseason, where he joined USA Basketball for junior basketball's premier event: the 2021 FIBA U19 World Cup. Ivey spent time as both a sixth man and starter for Team USA throughout the tournament, frequently logging minutes alongside LSU guard Adam Miller to form a hyper-athletic backcourt that relentlessly pressured the rim.

In the highly anticipated gold-medal game against top international prospect Victor Wembanyama and the French national team, Ivey recorded 16 points, 4 rebounds, 3 steals and a block in 23 crucial minutes. For his efforts, Ivey was named to the All-Tournament team alongside Gonzaga freshman Chet Holmgren (who was also named the tournament's MVP).

“Jaden Ivey is a terrific athlete who plays with a great pace. He is hard to guard, as he is very assertive attacking the rim, especially in transition," Babcock said. "He also uses his athleticism to be a hawk on the ball defensively. He still has plenty of room for improvement with his outside shooting, but I am excited about him as a prospect nonetheless. We already have him ranked highly, but after his recent stellar play, I’m leaning toward moving him up. He is a dynamic player with star potential.”

Ivey has been putting pressure on the rim often, resulting in nearly 4.4 free-throw attempts per game (up from 3.2 last season). He also has six and-one conversions and he displayed tremendous body control on all of them. However, he remains a two-way threat, averaging 1.4 steals per game — many of which have been pick-sixes that resulted in high-flying, acrobatic dunks on the other end. And with 7-foot-4 Zach Edey and big-bodied Trevion Williams averaging a combined 3.7 blocks per game behind him, Ivey is empowered to be more aggressive as a ball hawk away from the ball, utilizing his 6-foot-9.5 wingspan.

It is clear that Ivey is a burgeoning talent who has shown consistent growth over the past year. He is undoubtedly a high-priority prospect for our scouting staff to track closely as we inch closer to the 2022 NBA Draft.

Check out BasketballNews.com's 2022 NBA Draft Big Board, which features scouting breakdowns, video highlights, projected roles and more for all of the top prospects.