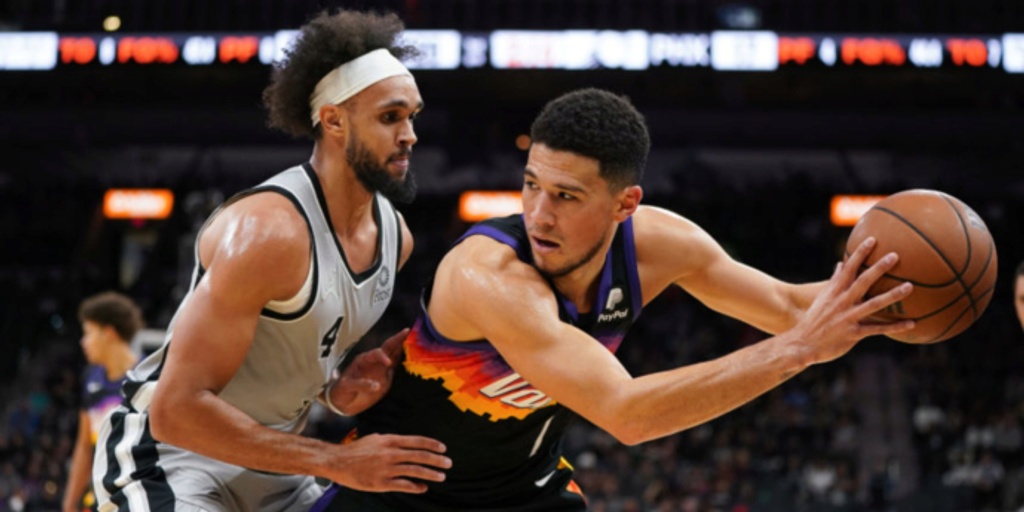 SAN ANTONIO (AP) — Devin Booker had 23 points, Deandre Ayton had 21 points and 14 rebounds and the Phoenix Suns won their 13th straight, rolling past the San Antonio Spurs 115-111 on Monday night.

Cameron Payne added 20 points off the bench for Phoenix, which had six players finish in double figures. Phoenix finished with 25 assists and went 45 for 87 (51.1%) from the field.

San Antonio point guard Dejounte Murray had 18 points, 11 assists and 10 rebounds for his seventh career triple-double. But the Spurs have now lost five straight and eight of 10 for their second-worst start in franchise history.

The Suns were patient on offensive despite the Spurs' quicker pace. San Antonio outscored Phoenix 20-10 to open the fourth quarter, pulling with 100-95 with 6 minutes remaining.

The Spurs are winless when trailing by double digits, and they matched a season-low with five 3-pointers on 20 attempts.

Suns: Frank Kaminsky missed his fourth straight game after suffering a stress reaction in his right knee. Kaminsky is averaging 10.6 points, 4.6 rebounds and 1.4 assists in 22.8 minutes this season as the primary big man off Phoenix’s bench. … Cameron Johnson had 18 points after scoring a career-high 22 in Sunday’s victory against Denver.

Spurs: Doug McDermott missed the game with an inflamed right knee. He sat out three games earlier this season because of soreness in the same knee. … Keita Bates-Diop made his fourth career start and first since his rookie season in 2019. … Jock Landale remains under the league’s COVID-19 health & safety protocols. ... San Antonio’s worst start came in 1997 when the club went 2-13.

Suns: At Cleveland on Wednesday.