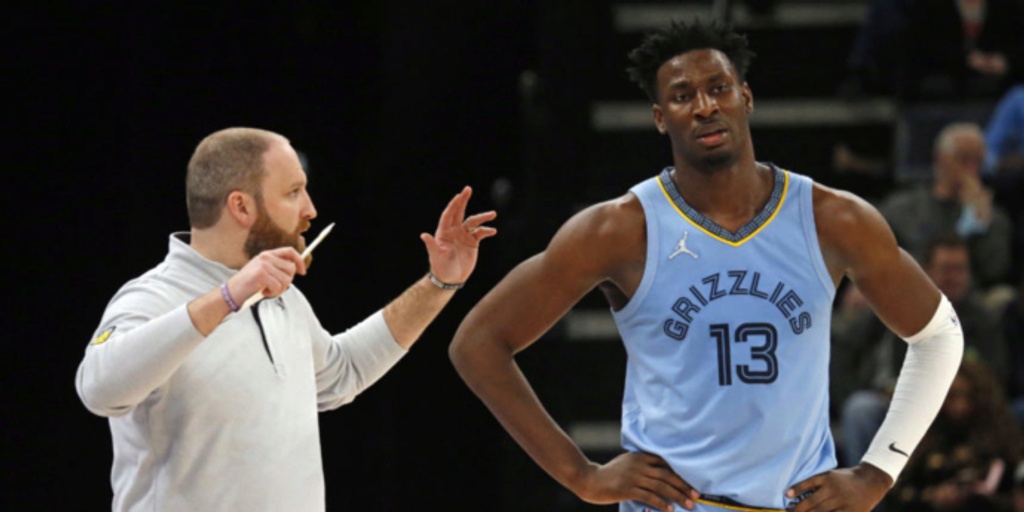 Why protecting players from foul trouble is a mythical strategy

Coaching in the NBA has an infinite number of aspects.

From scheduling practice to maintaining travel routines to managing numerous personality types throughout the staff and team to drawing up defensive schemes, team-specific game plans and a plethora of offensive sets, a lot goes into it.

On top of all that, there's also deciding on rotations that work for everybody.

Rotations are an ideal. If everything goes right in this game, this is how I want to sub and play this team. They are trying to balance minutes and rest; it is just a plan. But plans can change depending on each particular game, such as flow and the magnitude of the deficit or lead at any certain point.

That brings us to the biggest rotation killer: Fouls.

Fouls present a conundrum for each and every coach. Do you sit the player who's in "foul trouble" to protect him/her from picking up another foul too soon? Or do you allow the player to remain on the court and hope that he/she can defend without fouling to preserve your set rotation?

The theory of protecting players is this: If I leave this player in, he/she may foul out and be unavailable for the end of the game when I need him/her most. Therefore, I will pull the player out of the game to protect him/her from another foul, so they are available down the stretch.

The theory is valid... until it's not.

Here are three scenarios where this strategy has bitten NBA coaches in the behind, all of which have played out since the beginning of 2022.

LaMelo Ball is easily the most important player for the Charlotte Hornets on offense. His defensive shortcomings are excused by his ability to lead a team on the other side of the ball. Not having him in the game would most likely be a disaster for Hornets head coach James Borrego.

Charlotte was getting run out of the gym against the Memphis Grizzlies in this specific contest when Ball picked up his fourth foul with 10:32 remaining in the third quarter. Memphis was up 78-45, and Borrego opted to leave LaMelo in the game.

The Hornets ended up cutting into that 33-point lead, bringing the game within 24, when Ball picked up his fifth foul with 7:18 remaining in the third quarter. He remained in the game, hitting two free throws, for another 23 seconds of game play. His team was +11 since picking up his fourth foul.

The theory of protection would dictate that Ball should return anywhere from four-to-six minutes remaining in the fourth quarter. However, Coach Borrego decided to start Ball in the fourth quarter. He played every minute, did not foul out and the Hornets were +25 since his fourth foul, cutting a 33-point deficit down to a seven-point loss.

Granted the massive point differential probably made this an easier decision, but the point remains. He played more than 12 minutes without fouling out, and his floor time was not in garbage minutes, as his Hornets were fighting their way back.

Pascal Siakam has been on an absolute tear during the second half of the season for the Toronto Raptors. He is another player of extreme value for his team, and arguably Toronto's best player alongside Fred VanVleet. He is a two-way player who maintains a positive defensive plus-minus despite a large usage rate north of 25%.

With his team down 89-81 at the 10:51 mark in the fourth quarter, Siakam picked up his fifth foul; a pivotal decision was coming for Raptors head coach Nick Nurse. Could Toronto survive a six-minute stretch without one of their stars? Or was it time to roll the dice and get as much out of Siakam as possible?

With 2:40 remaining in the game, Siakam fouled out, but his team had a four-point lead (100-96). In those eight minutes, Siakam contributed 2 points, 2 rebounds and an assist — but more importantly, his defense helped his team go on a 19-7 run. Although he fouled out in clutch time, the decision to leave Siakam on the floor had a direct impact to Toronto's eventual one-point victory over the Nets.

The NBA leader in stocks (steals and blocks) is Jaren Jackson Jr., and he's currently the defensive anchor of the team with the third-best record in the NBA. His presence on the back-end blocking shots — as well as his ability to switch and guard on the perimeter — has made him the most important defensive player for the Grizzlies.

Jackson's season has truly been an outbreak defensively, as he is well on his way to an All-Defensive Team honor; part of that has been his ability to stay on the floor due to cutting down on fouls. Yes, he is second in the NBA in total fouls, but his improvement compared to his past seasons should scream how maddeningly frustrating his defense was at the start of his young career.

He has blossomed. Jackson has described the timing of his block attempt, which takes an insane hyperfocus, as the biggest factor in his improvement. However, he is still prone to cluster-fouling at times. When he fouls, he fouls in bunches.

In Sunday's game, JJJ picked up his second foul at the 10:21 mark in the second quarter with the Grizzlies up, 36-31. Just over a minute later, he picked up his third foul and was subsequently subbed out with Memphis still up five, 41-36.

Memphis played well against the lowly Houston Rockets the remainder of the second quarter, taking a 10-point lead into the locker room at halftime. When the Grizzlies returned to the floor, Jackson was on the court for a brief two minutes before picking up his fourth foul and being yanked out again.

When he was put back into the game with three-tenths of a second remaining in the third, Memphis had surrendered its lead, trailing 92-90. He remained in the lineup upon the start of the fourth quarter only to be pulled at the 9:39 mark, as Memphis was still down 96-99.

Jackson, carrying five fouls, never saw the floor again. The Rockets would score 24 points in the final nine minutes of the contest, including 14 in the paint.

The Grizzlies held the second-best record in the NBA heading into this game, only to lose to the worst team in the Western Conference. Defensively, they could not get a stop, and Jackson's absence had a direct impact on that. Memphis head coach Taylor Jenkins opted to protect JJJ from a sixth foul, so that when the game mattered in the end, he could have him.

This result has deemed Coach Jenkins' decision quite the foolish one. Sometimes, the game matters before the final four minutes. Sometimes, you have to roll the dice and either let the player foul out or hope the player defends without fouling. Either way, this crucial decision within a game is one of the many chess moves that a coach is responsible for.

In the end, I would argue that "protecting players" is a passive chess move that often leads to defeat. Sure, JJJ could have picked up his sixth foul within the next minute or two... or, he could have remained on the floor as an impact player and altered the course of the game.