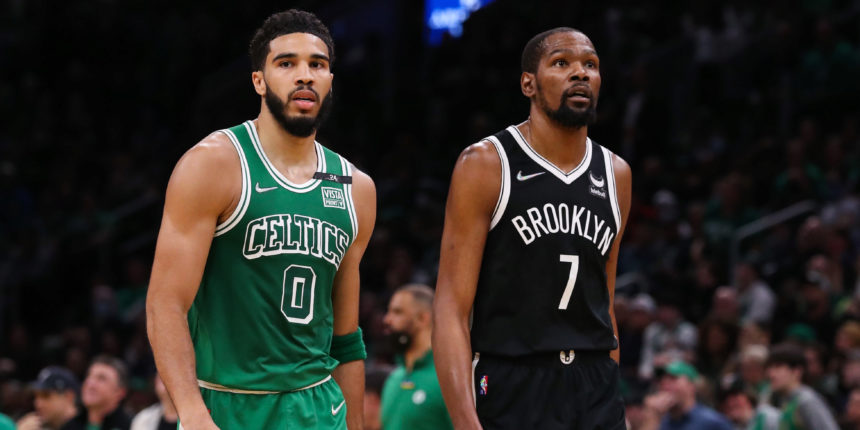 NBA playoff basketball is finally here! With things kicking off on Saturday, I decided to highlight an X-factor I'll be keeping tabs on for each first-round series. Let's dig in, shall we?

(For deeper thoughts on each series, listen to Part I and Part II of our series previews at The Dunker Spot.)

Any hope of an Atlanta Hawks upset begins with the virtuosic creation ability of Trae Young. He's one of the NBA's best pick-and-roll creators, blessed with the ability to bend defenses to his will with a blend of pull-ups, floaters, stop-on-a-dime foul-drawing and every pass in the book.

Enter the Miami Heat, who do a tremendous job of flattening out offenses with switches. And that discussion begins with the versatility of Bam Adebayo.

The Hawks score on this possession, but look at how much work it takes. Double drag? Nope. Running to a handoff to create an advantage? Nope. Forcing a favorable switch (Tyler Herro will have his work cut out for him) and hoping to attack? Nope, here comes a double.

Only two teams — the New Orleans Pelicans (0.847 PPP) and the Sacramento Kings (0.722 PPP) allowed fewer points per possession against Young-led ball screens than the Heat (0.851 PPP), and Miami faced more picks (182) than those two teams combined (119).

There's a reason for that. The Heat have the personnel and scheme versatility to make Young's life difficult.

"We got to be physical with them. Now they don’t have Robert Williams, so they have less of a presence in the paint. We can attack Al Horford and [Daniel] Theis. Them not having Rob Williams is huge.”

That was Bruce Brown following the Brooklyn Nets' victory over the Cleveland Cavaliers in Round 1 of the Play-In Tournament on Tuesday night. Kevin Durant had to put out the fire shortly after, but the message rang loud: We think we have another avenue to attack your defense.

I think a lot about this possession from their most recent outing.

The Nets opened the quarter with Spain pick-and-roll (!!!) and Boston switched every bit of it. That led to an Al Horford-Kyrie Irving matchup, but Williams felt comfortable trapping Kyrie to get the ball out of his hands. Brown has been making hay as a short-roll threat in 2022, and does so here by nailing a floater.

How often will those advantages be there for Brown? With no Williams, the Celtics will have to decide which of their frontcourt guys — Horford or Theis — will take the Brown assignment. And from there, what coverage will they go with? Will they switch, possibly throwing Horford or Theis on Kyrie or Kevin Durant in space? WIll they trap from there?

If so, the Nets may have a way to create some advantage situations aside from their stars.

This doesn't seem like a great series for the Chicago Bulls. Quick hat tip to Matt Moore for detailing just how much of a mismatch — on paper, at least! — this matchup projects to be.

If there's a Milwaukee Bucks thing to keep an eye on, it's the Khris Middleton-led stuff. The Bucks swept the season series, but Middleton wasn't his best self. He shot a shade under 28% from three and, for the purposes of this section, averaged nearly 4 turnovers per contest.

For the brilliance that Middleton can provide with his shot-making, his handle has long been a weak point against the peskiest of defenders. He's likely to see a steady dose of Ayo Dosunmu and Alex Caruso, guards who don't mind getting in his jersey.

If Middleton isn't able to get to his spots comfortably — or worse, turns the ball over — the Bulls may have an avenue to junk up the Bucks' half-court attack.

I think James Harden's hamstring has been talked about enough. I'm not a doctor; I simply hope he's good to go because he's freaking awesome when he's healthy. It unlocks the full breadth of his game.

Regardless of which version of "Harden, The Driver" we get, he's going to need this shot.

Harden made one of his eight stepback-three attempts against Toronto this season, and has converted just 31.6% of his stepback threes this season (roughly 4.0 attempts per game) via InStat tracking. That's a wild dip from last season (36.7% overall on 4.3 attempts) and the year before that (34.7% on 6.5 attempts).

I don't have to explain why shooting under 32% on an already-tough shot isn't ideal. The layer beyond that shot is the real issue; the nature of the shot, and location of the shot, makes Harden one of the last lines of defense in transition. The Sixers have been bad at getting back — they rank 20th or worse in every transition defense stat, per Cleaning The Glass — while the Raptors have been incredibly fruitful when they're able to run.

Herb Jones is one of the best defenders in the sport. My pals and I landed on him as the NBA's best screen navigator already. His nimbleness and persistence will bother someone in this series.

That's the thing though: He's only one dude.

If Jones gets the Devin Booker matchup (a reasonable guess), who's defending the other All-NBA caliber guard for Phoenix? That might land on nominal point guard CJ McCollum, who hasn't had the best luck at defending Paul.

Paul-led pick-and-rolls with McCollum as the primary defender have generated well over 1.5 points per possession over the last three seasons, per Second Spectrum. That number drops to the 1.3 PPP range when filtered for drop coverage, but, like, that's still pretty absurd.

The Pelicans will have some options. Chief among them: Switching screens between Paul and Deandre Ayton, then tasking Jaxson Hayes (likely to defend Jae Crowder) with saving McCollum by executing a scram switch.

Of course, the Suns have counters to that counter; don't be surprised if Crowder is used as an off-ball screener to occupy Hayes' attention.

(2) GRIZZLIES VS (7) TIMBERWOLVES: WHERE IS JAREN JACKSON JR.?

Let's take a look at two possessions. Ja Morant-led pick-and-rolls, the Minnesota Timberwolves in their base "two to the ball" pick-and-roll coverage. Two missed shots. Keep an eye on Jaren Jackson Jr. for both.

That's JJJ chilling at the left wing, with Jarred Vanderbilt stunting at the roll from Steven Adams before retreating. D'Angelo Russell is now tasked with making the rotation as the low-man.

On this one, Jackson is chilling in the dunker spot after clearing the left side of the floor. The Memphis Grizzlies are setting up a screening action for Desmond Bane — a smart counter to the Wolves sending two players to Morant — but look at Vanderbilt. He's able to peel over early while Karl-Anthony Towns works his way back to Adams. Russell tasked with dropping down to Jackson if a full rotation from Vanderbilt is needed.

When I say "Where is JJJ.?", you can take that in a "Will he show up?" context. He will need to knock down threes, and his mobility will be needed against Towns in space when he's asked to play the 5.

But it's important to note Jackson's literal location on the court. Where he's stationed can lead to some tough rotations for the Wolves if they continue to defend aggressively.

(3) WARRIORS VS (6) NUGGETS: FINDING THE BLEND WITH NIKOLA JOKIC

Nikola Jokic has improved quite a bit as a defender over the past three seasons. He's firmly good as an at-the-level defender, and he made real strides as a drop defender this season. Arguing for an All-Defensive team selection is a bridge (or two) too far, but the liability talk should've died a while ago.

With that being said, the Golden State Warriors pose some real trouble for him. The Stephen Curry-Jordan Poole-Klay Thompson triumvirate has the pull-up chops to abuse drop coverage. Kevon Looney screens and hand-backs could also create open threes.

With Draymond Green (or Gary Payton II when he's out there), the Warriors have the short-roll playmaking chops to beat a two-to-the-ball scheme.

We get both coverages from Jokic on this possession. He starts in drop, with Monte Morris doing a fine-enough job staying attached to Poole. The ball swings to Thompson, and Jokic plays higher up. Two screens, two coverages, two solid results for Denver.

Then the third action happens, which also coincides with Poole jetting to the right corner and Aaron Gordon being occupied with Andrew Wiggins. Jokic is in another drop but he can't beat Thompson to his spot, nor does he have help on the backline.

What do you do with that?

The Warriors generated north of 1.3 points per possession (!!!) when facing Jokic in drop coverage during their regular season meetings, per Second Spectrum. Playing Jokic to the level will be a tough task, especially considering the offensive workload he'll have to carry, but that may be the easier poison to deal with.

With no Luka Doncic for at least Game 1, more offensive responsibility will fall into the hands of Spencer Dinwiddie.

He's been a godsend for the Dallas Mavericks, averaging 16-3-4 while shooting over 40% from three since joining the team. He's been a great complement to Doncic; naturally, some of Dinwiddie's success is due to Doncic drawing the best perimeter defender on the opposing team.

That may shift to Dinwiddie now — I doubt we're going to see, like, Royce O'Neale on Jalen Brunson for extended stretches. It'll be up to Dinwiddie to puncture defenses and start the chain of rotations. He hasn't had much success against Utah this season; he's shooting just 44.4% off of drives against the Jazz, and he's paired that with a paltry 8.5% assist rate.

Middleton might have remained out even if Bucks had advanced
2h

Robert Sarver: Suns are willing to pay luxury tax and 'go for it'
2 days

Inside look at the Suns' rise: The making of an elite NBA organization
2 days