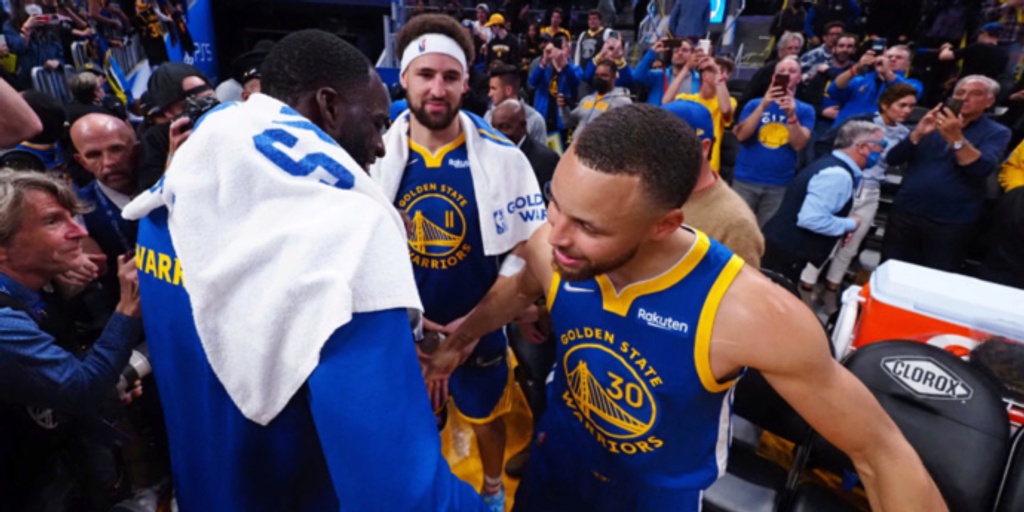 Warriors hope to have Curry healthy, veteran core together

Klay Thompson planned to turn on the highlight reel and revel in some of Golden State’s past playoff runs while preparing for this next one, which has been a long time coming for him.

He’s healthy again at last, ready for the postseason stage and to stand behind that “championship or bust” declaration he made months ago.

Thompson cherishes the five straight NBA Finals he experienced. Now, on Saturday night, the Warriors hope to have their four veterans from those deep playoff runs back together again at last: Stephen Curry, Draymond Green, Andre Iguodala and Thompson.

“It’s very special, it’s very rare in pro sports,” Thompson said. “We’ll definitely lean on it, I’ll definitely watch old footage of the best games. I’m just so excited ... to be a participant in playoff basketball again. I’m not going to take it for granted, I’m going to play my hardest, I’m going to lead. We’ll definitely have to rely on each other’s chemistry, which will be fine. We’ve been playing together for so long it’s like clockwork.”

Curry is expected to play Saturday, a month to the day after he injured his left foot on March 16 at home against Boston and missed the final 12 regular-season games.

The Nuggets are counting on seeing No. 30, and they know what that means for Golden State's transition game and pressure from the perimeter.

“They’re a great running team. They averaged 18 fast-break points a game against us. We know that 3-point shooting is prolific," Nuggets coach Michael Malone said. “... We know we’re going to see a healthy Klay, a healthy Steph and a healthy Draymond. And that’s a team that’s won multiple world championships.”

Yet the Warriors have hardly experienced the kind of late-season continuity teams strive for with the playoffs approaching.

Thompson finally returned from a 2½-year absence in January only for Green to go down. Green came back, then Curry sprained a ligament in his foot. Iguodala missed long stretches because of his troublesome lower back.

“It would be really nice to get them on the floor together but we’ll see,” coach Steve Kerr said.

Denver won three of the four meetings this season between the teams, only one of those decided by 10 or more points.

Thompson's return to the playoffs is a major milestone after he suffered a torn ACL in his left knee in the deciding Game 6 of the 2019 NBA Finals loss to Toronto. He had surgery and then tore his right Achilles tendon while working his way back, leading to another season-ending operation.

Losing to the Raptors is still plenty fresh.

“It still hurts but you've got to lean on those experiences,” he said.

Quickly finding some chemistry with everybody healthy again will be a key to Golden State's success. Even if the Warriors might be winging it at times and adjusting on the fly, as Kerr expects to do given all the moving parts.

“The beauty of it is they’ve had so much history and played together for over 10 years now,” reserve Damion Lee said. “Steph is probably the easiest person to just insert on any team, it doesn’t matter if he’s here, any team across the league. I think he’s probably the easiest person just to insert because you know how selfless, how amazingly talented he is across the board and just how much sheer firepower that he brings.”

GETTING READY FOR GREEN

Malone considers Green the player Denver must be ready to match on both ends with all of the little things he does. Green didn't play in any of the matchups this season but has done well facing Nuggets star Nikola Jokic.

“Draymond is the guy that to me that makes that team go. He’s their leader, he’s their energy, he’s their toughness — playmaking, rebounding defense, he just does so much for that team,” Malone said. “We were 3-1 against them but we didn’t see Draymond, so obviously it’s going to be a completely different animal with him playing."

Malone spent the end of the regular season focusing on his team’s health to make sure Denver is at full strength. That meant resting Jokic and others in the regular-season finale against the Lakers.

In four games against the Warriors, Jokic averaged 28 points, 15.8 rebounds and 8.8 assists.

“We can try different things defensively but Draymond's going to guard him quite a bit for sure,” Kerr said.

Big man Kevon Looney, who played all 82 games, also will take on some of the defensive load on Jokic.

"I expect everything so we will see," Jokic said.