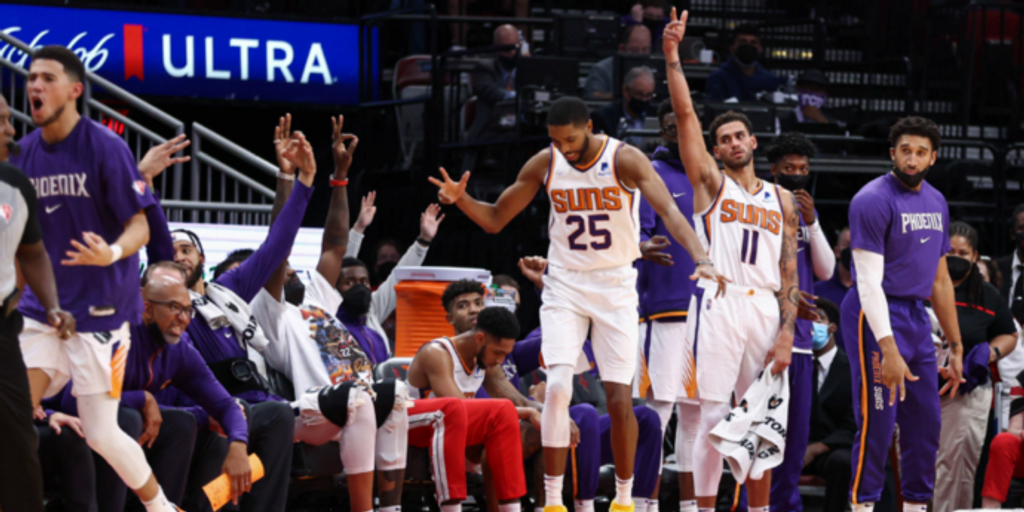 The Phoenix Suns opened the season 1-3 with a rocky road of inconsistencies. Ever since, Phoenix has rattled off 10 straight victories, the most for the franchise since 2009-10. Clearly, the Suns are right back in the groove we all saw last season, and that’s a scary thought when you realize they’ve played maybe 25% of “great” basketball along this stretch.

Heading into this season, I projected the Suns to finish with 60 or more wins. This team not only brought back its entire rotation, but it added two more win-now pieces to the puzzle in JaVale McGee and Landry Shamet to bolster an already solid bench unit. The way Suns general manager James Jones has reconstructed the roster since the beginning of last offseason has been nothing short of spectacular. Adding Chris Paul was the key gem, but now the ancillary pieces are making this group hum at high speeds The Valley hasn’t seen since the "7 Seconds or Less" era, when two-time MVP Steve Nash was crushing defenses by running Mike D’Antoni’s forward-thinking offense.

Over the Suns’ 10-game win streak, which didn’t include much of Deandre Ayton due to a nagging leg contusion, they have looked the part of a revved-up machine ready to hit an even higher gear than we’ve seen already. Phoenix is outscoring opponents by 10.9 points per 100 possessions, second only to the newfound juggernauts once again in the Golden State Warriors (+15.5 Net Rating). After a sluggish start defensively, the Suns have locked in on that end of the court, allowing only 98.8 points per 100 possessions — again second only to Golden State (96.8 DRTG). And the cherry on top during this incredible stretch of basketball? Phoenix ranks top-10 in offensive rating as well.

Only three teams have ranked top-10 in both offensive and defensive rating over their last 10 games: Golden State, Brooklyn and Phoenix. This sure looks like the current top tier in the NBA, especially out west, where the Warriors and Suns are creating comfortable distance from everyone else.

It was a foolish exercise to believe the Suns were a fluke on their run to the NBA Finals last season. If anything, it was just the beginning of what should be a fruitful era of Suns basketball, one which had laid dormant for over a decade.

The Suns' ball movement on this play 😮 pic.twitter.com/ClomkeRjyz

In Wednesday’s comeback 105-98 victory over the Dallas Mavericks, who were without superstar Luka Doncic due to an ankle sprain, the continuity and resilience of the Suns really stood out.  Though Dallas was red-hot from beyond the arc, Phoenix kept battling back until the dam finally opened on both ends. This is a similar trend from the Suns’ 99-96 win on Monday in Minnesota as well, battling through adversity and pulling off another impressive win behind Devin Booker and Paul’s fourth-quarter heroics.

The battle-tested moments for the Suns in do-or-die playoff situations have turned this group into a fearless bunch that thrives in winning time instead of wilting away. Already in that mode this early in the 2021-22 season, Phoenix is setting themselves up once again as a Finals contender. And right now, it’s hard to argue that when stacking up every other team around the Association.

“After our experience and our playoff run last year, we pay attention to the details,” Booker said after the Suns’ win on Wednesday at the Footprint Center. “Every game, we’re preparing for what the next level is. That’s the postseason, so every play counts. We always say we’re not against our opponent, we’re playing against ourselves. You know, holding each other accountable. It’s been working well for us, but we always have room to grow.”

It was the first taste of the playoffs last season for the Suns’ young core. Now, they are using it as fuel for this season and beyond. Booker mentioned Wednesday night how that Finals defeat against the Milwaukee Bucks — the hurt they felt losing four straight after taking a 2-0 series lead — is what drives them now. For a team that motivated to right a wrong, it’s hard to deny how much that helps over a grueling 82-game regular season slate.

“The playoff run last year made us build the trust that we need moving forward,” veteran forward Jae Crowder said after the Suns’ latest win. “You put us in tough situations, we don’t panic. Teams go on runs, we’re not over there yelling at each other. We’re just trying to find solutions. Trying to figure out how to move on to the next play, how not to let that happen again and whatever mistakes have been taking place.

"The trust is there. We trust each other. Our group is connected. That helps us play from behind sometimes and chip away at leads and feel like we’re always in a game. No matter the score, no matter the situation, we feel like we’re in a game. It’s just that trust has definitely picked up, and I think the playoff run last year we benefited from that, just our trust level with one another.”

The Suns have all the pieces in place to make another deep playoff run, and potentially right the wrong of their Finals collapse. Booker is a superstar. Paul, a Future Hall-of-Famer, is a smooth operator who runs the show at an incredible pace within head coach Monty Williams’ system. Crowder is a grizzled, tough veteran who holds the group even more accountable. Ayton continues to mold himself into a dependable player who feasts around the basket and patrols the rim with such elegance for a 7-footer. Mikal Bridges is a future All-Defensive First Team nominee (and if he’s not there needs to be some ballots snatched away and re-assigned). Endless amounts of starting-caliber role players can add a needed surge on any given night.

Add everything together, and the Suns’ 10-game winning streak shouldn’t be a surprise. For a locker room motivated to the level Phoenix’s is, it is one of the most dangerous teams in the league.

Scarily enough, the Suns are just getting started at a level they should be consistently playing at moving forward.