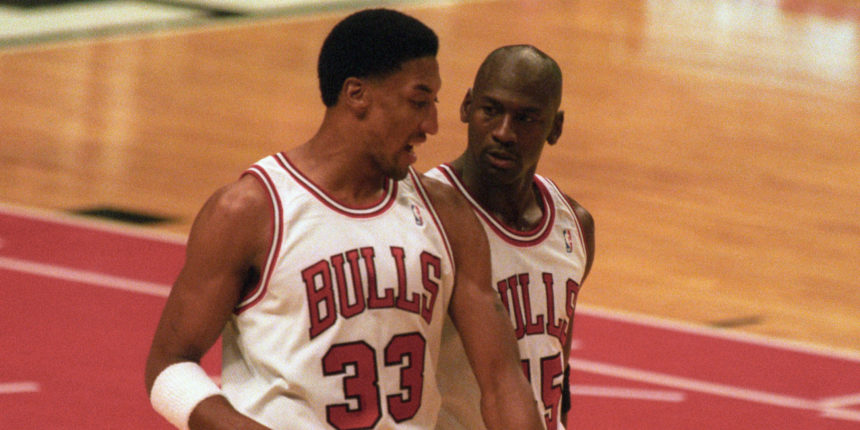 Pippen on Jordan: 'Our friendship is not where people see it on TV'

An excerpt from Scottie Pippen’s upcoming book, “Unguarded,” has caught many people off guard. But judging by his most recent interview, the Hall of Famer is only getting started in telling his side of the story as it relates to Michael Jordan and the Chicago Bulls.

Pippen revealed many things in his book — from feeling like “nothing more than a prop,” to criticizing Jordan for being the only Chicago Bulls player to make money off “The Last Dance” documentary. During an interview with Michael Strahan of Good Morning America, the 6-time NBA champion expanded on it while revealing the truth about his friendship with MJ.

"It wasn’t what you saw on the court. We always will have that respect for each other, but our friendship is not where people see it on TV," Pippen revealed on GMA.

It’s not surprising that Pippen admitted the two are not that close off the court — many former teammates and rivals say Jordan wasn’t the easiest to hang around as well. But as professionals, when they went to war every game and competed for every championship with the Bulls during the 1990s, it seemed like MJ and Pippen were inseparable. So why is he throwing so much shade at his former teammate?

Pippen is in the middle of his "Unguarded" promotional campaign, and so far, he’s nailed it. For some fans, he did not need to twist things to make it more interesting or start a verbal boxing match with former players. Pippen's name and his career will forever be associated with the Bulls and MJ. But he will always be known as the ultimate second option, the supporting actor that deserved the best actor award and the player who could be one of the most underappreciated ever.

However, with the massive success of "The Last Dance" documentary, the Hall-of-Fame small forward couldn’t stay quiet anymore. So Pippen used the book to provide his own point of view on Jordan’s project and how everyone else besides him was portrayed.

The focus of the "The Last Dance" was MJ, so naturally, the story revolved around him. Pippen wanted he and his teammates to receive equal recognition, or at least compensation for allowing themselves to be filmed during the 1998 season. He even called his Jordan “condescending.”

Pippen may have a point. There would be no Bulls dynasty without him or the rest of those teammates.

The more controversial it gets, the better. Fans will buy "Unguarded" because of the content inside of it. Let’s hope it turns out to be a massive success, so Pippen can say the end really did justify the means.