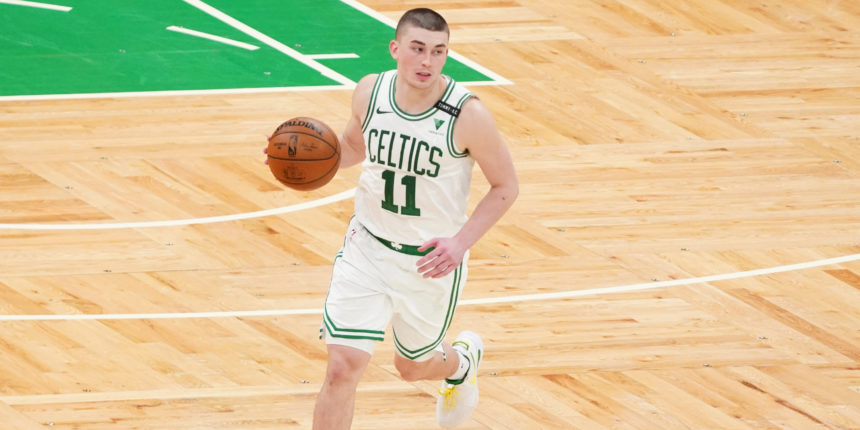 Payton Pritchard arrived at the NBA Summer League in Las Vegas looking to take advantage of the opportunity to show he deserves major minutes this upcoming season with the Boston Celtics.

The second-year point guard was one of the biggest stars in Las Vegas before leaving the team due to a prior family engagement. He averaged 20.3 points, 8.7 assists and 5.7 rebounds in three games while helping the unbeaten Celtics reach Tuesday night’s championship game against the Sacramento Kings (4-0).

That’s good news for Boston, which parted ways with Kemba Walker this offseason. Pritchard may be in line for a more prominent role in Boston’s backcourt that includes Marcus Smart at point guard.

Pritchard shot 57.7% from 3-point range and his 1.38 points per possession ranks first among all Summer League players. He also protected the basketball well, averaging 1.3 turnovers per game

And while he won’t play in the title game, Pritchard gave the the Celtics with something to think about before leaving.

“That is what separates good point guards from great ones — the ability to make people around you better and get people shots and just being able to control the game,” said Pritchard, who averaged 7.7 points and 1.8 assists last year in 66 games for the Celtics. “That is what I’m trying to become and I’m going to keep working on that.”

The Kings reached the championship game behind a balanced scoring attack and a consistently strong defense ignited by first-round draft pick Davion Mitchell. His numbers are eye-popping, but there’s no denying what he brings on defense.

Mitchell earned the nickname “Off Night” while helping Baylor to an NCAA national championship last season — as in, whoever he’s guarding is going to have an off night.

“That’s his bread and butter, the way he attacks the game, the way he defends it,” said Kings Summer League head coach Bobby Jackson. “He’s a really, really great on-ball defender. He has to get better off the ball and we’ve talked about it. But he sets the tone at the top of the key offensively and defensively for us.”

Here are some of the other Summer League standouts:

— Cam Thomas, Nets: Thomas is leading the NBA Summer League in scoring, averaging 27 points per game while probably making some NBA general managers wish they hadn’t passed on drafting him. The 27th overall pick in 2021 had a 31-point night that included a game-winning 3-pointer in sudden death double overtime Thursday followed by a 36-point performance Sunday. The LSU product is shooting 36% from 3-point range.

— Cade Cunningham, Pistons: The No. 1 overall pick in the NBA draft hasn’t disappointed, averaging 18.7 points and 5.7 rebounds per game. There are surely some Detroit fans who’d like to see him with the ball in hands more often than what they’ve seen this summer given his passing ability. But he’ll needed to cut down on his turnovers (4 per game) moving forward.

— Paul Reed, 76ers: The 76ers already have an All-Star center in Joel Embiid, but G League MVP Paul Reed could bring some quality depth to Philly. Check out Reed’s numbers in an overtime loss Sunday night to the Timberwolves: 27 points, 20 rebounds, four assists, four steals and four blocks. Reed is averaging 17.5 points, 12.5 rebounds and 2.5 blocks per game in Las Vegas.

—Immanuel Quickley, Knicks: Like Pritchard, Quickly is another second-year point guard who appears to have taken a major step forward in his game, averaging 21.8 points and eight assists per game. He’s only shooting 25% from 3-point range, but the 2020 first-round draft pick has shown promise that he could really begin to emerge in his second season.

— Rockets Rookies: The Houston Rockets had three picks in the first round, including Jalen Green at No. 2 overall. Green played well in three game appearances averaging 20.3 points per game while shooting 52.6% from 3-point range and 92.9% from the free throw line. But the Rockets have also gotten a big boost from 6-foot-9 center Alperen Sengun, who is averaging 15 points, 11 rebounds and three blocks.

— Desmond Bane, Grizzlies: The second-year guard has quietly had a productive summer and is third in the league in scoring at 24 points per game while shooting an eye-catching 69.2% from beyond the arc. He could be a nice complement to point guard Ja Morant this season.