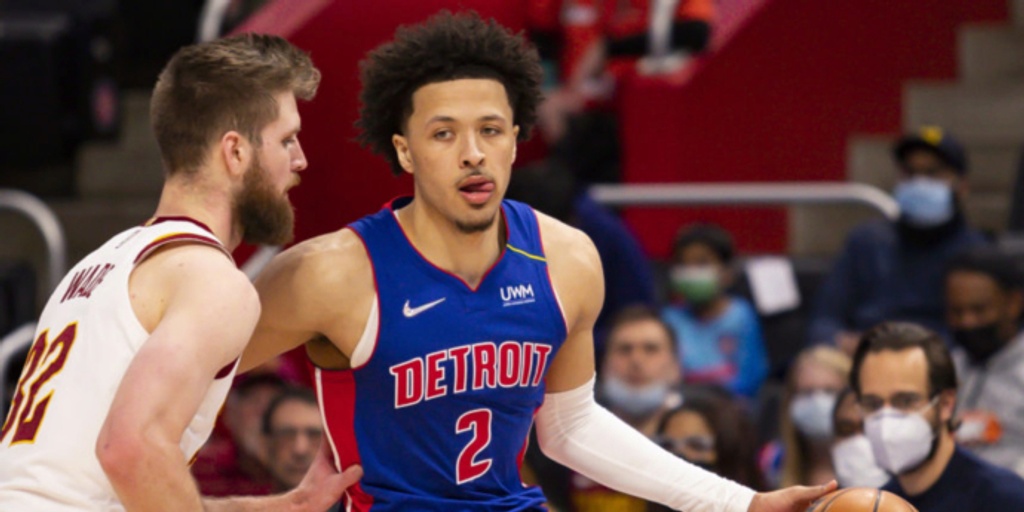 Every day, BasketballNews.com gives you NBA betting analysis before tip-off. Make sure you subscribe to our daily podcast "Nothing But Bets" on Apple Podcasts, Spotify or wherever you listen to podcasts. This season, "Nothing But Bets" is 55% against the spread, plus we're up hundreds of dollars on PrizePicks.

For this fun Monday slate, which picks and trends are the best to wager on? Let’s break it all down as you lock in bets and lineup cards:

This feels like the perfect opportunity for the underdog to make this one closer than expected throughout. Washington is without Bradley Beal, plus Kristaps Porzingis isn’t making his debut just yet. No. 1 overall pick Cade Cunningham has been such fun to watch this season, and he’s why I believe the Pistons cover the 4-point spread.

All season long on "Nothing But Bets," we’ve been tailing the Thunder as double-digit underdogs. More often than not, it’s been a very sound strategy to deploy. It’s time to hammer the Thunder against the Knicks at Madison Square Garden, mainly in large part to New York’s inconsistencies. Josh Giddey and the young Thunder keep cashing for the plus bettors.

Sacramento has found their winning ways recently, thanks in large part to the blockbuster trade for Domantas Sabonis. The results between Sabonis and De’Aaron Fox have been fantastic thus far. In Brooklyn against a Nets team without Kyrie Irving and Kevin Durant, we’re betting on the Kings to keep stacking up victories.

Portland looks completely different after this year’s trade deadline. Heading on the road to play the defending champions is a bad outcome waiting to happen. Milwaukee easily handles business against the newly tanking Trail Blazers.

The DeMar DeRozan revenge game, and we’re happy to take advantage of the low spread across the board. Chicago has been outstanding this season as favorites, plus DeRozan’s scoring will be too much for his former team. We feel confident locking in Chicago because of DeRozan and Nikola Vucevic.

Toronto continues to be one of the best stories in the NBA this season. Pascal Siakam and Fred VanVleet have been arguably playing at near-All-NBA levels, plus their young core continues to take significant strides forward. The Pelicans have been more consistently lately, but it’s hard to envision a scenario where they stop the Raptors’ momentum.

A huge spread for this game, but it’s definitely worthy of the large line. Utah on all accounts hold significant advantages across the board compared to Houston. Donovan Mitchell will easily be able to have his way with the Rockets, so this feels like one of the best bets of the night for Monday’s slate.

Nikola Jokic is playing at an outrageously high level right now, even better than last season’s jaw-dropping MVP campaign. Jokic is carrying a Nuggets team without Jamal Murray and Michael Porter Jr., further solidifiing his status among the NBA’s elite. Denver could be a sleeper team in the playoffs, especially once Murray returns. Against the Magic, I believe Jokic and the Nuggets easily cover the 11.5-point spread.

It’s never a wise strategy to bet against Stephen Curry and the Warriors. On Monday, it’s no different when they play against the Clippers in Los Angeles. Not only are the Clippers without Kawhi Leonard and Paul George (potentially for the rest of the season), one of their new additions in Norman Powell is already dealing with an injury as well. Wagering on the Warriors here feels like the best move.