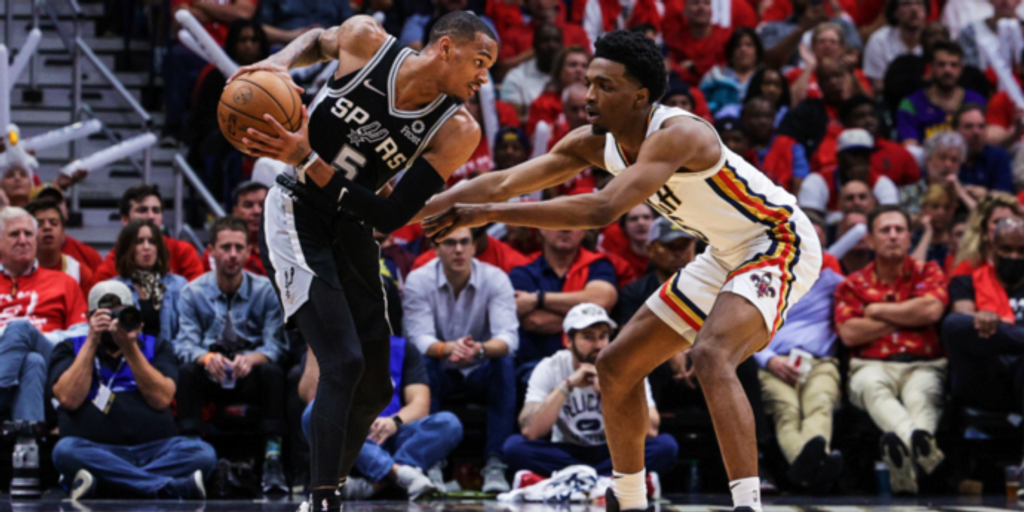 In a dynamite defensive performance, the New Orleans Pelicans stifled the San Antonio Spurs, 113-103, advancing to the second round of the Play-In Tournament toward a matchup with the Los Angeles Clippers on Friday night. The final score indicates a close game, and while there were moments down the stretch after a Devin Vassell heater, the Pelicans largely controlled the game.

The trio of Brandon Ingram, CJ McCollum and Jonas Valanciunas combined for 81 of New Orleans' points, all putting forth stellar performances.

Yet, if there was one takeaway (for me) from last night's game, it was that Herb Jones is HERE.

If you've followed the NBA season and come across the Pels for even a modicum of time while perusing NBA League Pass, you probably know about Jones, as he's done this all year. But he dominated in primetime, and Mark Jones' silky voice peppered the broadcast with varying intonations of "HERB JONES" as many different points of the night.

There are moments and games where it becomes recognized that a player is a star. Last night, Jones put his stamp on the national stage, emphatically punching his ticket as a defensive star. That's such a wild statement. A defensive star. It's not easy to cement yourself as a bucket-getter or primetime scorer, and it's that much harder to play defense with the ferocity, efficacy and splendor required to captivate an audience. Jones fits the bill and then some, and as a rookie, that's absurd.

(Nekias Duncan, Jackson Frank and I unanimously voted Herb Jones to the All-Defensive Second Team about a month ago.)

Jones took first time All-Star guard Dejounte Murray as his main assignment, and man, he had him in purgatory. Murray finished 5 of 19 from the field Wednesday night. Jones' hands were everywhere and on everything, reminiscent of a Naruto montage.

The opening possession of the game was indicative of what the night would be for Murray. It was akin to watching a world title fight open up, and the challenger unloads the first jab and immediately it's like "Oh, this is way different than I thought." And as the viewer, you quickly find out that this isn't a tune-up fight.

This is one of my favorite things about Herb, and a part of what makes him a special defender. He uses his hands and his feet in tandem with regularity. It sounds minute, but it's a sizable difference. So much of defense is about consistency, and Jones embodies that.

His hands never come off of Murray; just enough to bother, but also possessing the deftness to not foul. Even with a pretty solid screen from Jakob Poeltl, Murray can't shake free. The Pels maintain their shell, and it's a turnover.

The Pels run a great deal of ICE coverage, forcing ball-handlers to the sidelines to prevent middle penetration. Valanciunas is a quality defender, but he has some limitations with his mobility. Plays like this allow New Orleans to stay solid and maintain a strong base. (I'm super interested to see how this plays out against a more dynamic offensive team in the Clippers, because it's much harder to play ICE against a team that can thrive on five-out lineups).

Jaxson Hayes comes up with the double drags to ICE along with Jones, calls out the coverage and Murray catches him going downhill. While this isn't a perfect defensive possession from Herb, it's a reflection of the tools that allow him to supersede technique at times (he's an incredible technique defender, don't get it twisted). Even if he does take a wrong step, he has impeccable recovery skills and the ability to still contest what would otherwise be an easy finish at the rim against most defenders.

Run Jones through the ringer of screens and try to grease the context for an off-ball scorer? Not on Herb.

Try to initiate the offense with a kick-ahead to one of the best downhill drivers in the game in Keldon Johnson? Not so fast. I am not a fan of the charge, but man, Jones makes me want to be. This is just a clean standing of ground, and I love it. It would be so easy to let that be a quick lay-in with a decent enough contest, but again, this is what separates Jones from the rest.

Jones also emphatically closed the half, shutting down a sideline out-of-bounds play leading to a Johnson three-point attempt.

The block, the staredown. YES.

Even in moments when Jones did get overly physical and was called for fouls, those are plays you live with. I'm not a huge believer in tone-setting; it can be cliche and attributed to non-basketball plays that really don't do much but stop the clock. (Although, what do I know? Glue Girl was a game-changer.)

That rotation to block Vassell is fantastic; the communication and vision stands out. That reconnection on Murray after the screen is all you can ask for, even if ideally a foul is not attached. Jones constantly made multiple Spurs players feel him.

Then, there are the "crown jewel" plays — the pinnacle defensive highlights that you watch in amusement and giggle because those things just shouldn't be able to happen on the court.

There aren't enough words to describe what a fun and enjoyable defensive player and prospect Jones is. This isn't just a "rookie defenders" shouldn't be able to that type beat. This man is legitimately already one of the best defenders on planet earth regardless of age.

While the Pelicans still need to win against the Clippers on Friday night to secure another week or two of guaranteed basketball, Herb Jones' play should be cemented in your cerebrum moving forward.