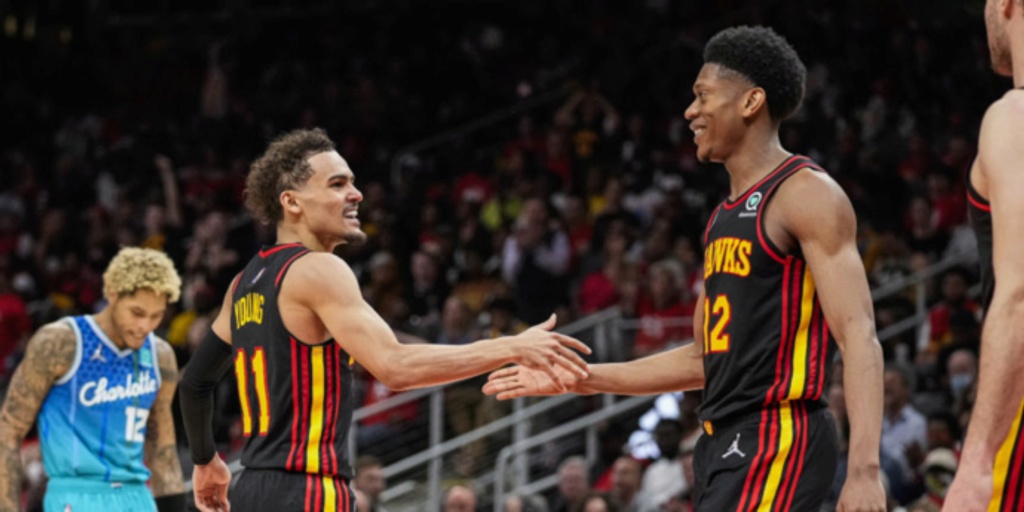 The value of playing fast: How De'Andre Hunter helps the Hawks best

The signs were there for De'Andre Hunter's big game on Wednesday night.

Take the Atlanta Hawks' opening possession, for example. It started with a pick-and-roll headlined by Trae Young. The Charlotte Hornets trapped it, a strategy that mirrors the one they deployed during their last outing, putting Young in retreat mode.

Young fired a relief pass to Danilo Gallinari, creating a 2-on-1 advantage. P.J. Washington picked up Gallinari, forcing a long closeout for Miles Bridges (boy, did he have himself a night) to Hunter in the corner. Gallinari swung a pass to Hunter, and we got this:

It's a missed shot, but it was an important one for Hunter. He beat a closeout with a quick up-fake, then quickly flowed into a pull-up middy. It's a reasonable shot that Hunter has grown comfortable with in his short NBA career, but the key is his decisiveness.

Hunter has displayed growth as an on-ball creator, but not to the point where he warrants a ton of lead duties. He's mostly tasked with operating off the ball, feasting off the opportunities created by Young and others.

Though the outline of a strong play finisher are there — he's converted 37.7% of his catch-and-shoot threes in his career, and has generated nearly 1.1 points per possession when facing a closeout, per Second Spectrum tracking — there's been a fluidity missing.

Tune into a Hawks game, and you're likely to see some variation of this: an advantage being created by Young, the ball swinging around the perimeter to Hunter, then Hunter holding the ball for a beat before making some sort of move. The advantage would be diminished, if not eliminated altogther.

He's shown flashes of making lemonade out of lemons, using his high release point to knock down tough jumpers, or using his strength to create an edge on drives. But the process was disjointed. You'd come away wishing Hunter would just go.

That's what made Hunter's first possession from Wednesday's blowout Play-In Tournament win over the Hornets so encouraging. It's what made the whole first quarter encouraging. The stat line from the quarter won't blow you away — 3 points on 1 of 4 shooting, an assist — but the processing speed will.

He exploded for 16 points on 7 of 8 shooting. Of those eight attempts, six of them came in the painted area or right at the rim. He was buzzing off the ball, staying light on his feet before jetting inside for cuts or attacking the basket after receiving a pass. The Hornets struggled to deal with him once he got a head of steam.

Hunter only took two jumpers in the quarter: a pull-up middy after attacking a wild closeout (a good shot for him that missed), and a heat check from the corner over the outstretched arms of Montrezl Harrell. You don't love the hold-hold-jab shots from Hunter, but he earned that attempt. It also helps that he made it.

Hunter averaged 2.22 seconds per touch during the regular season. On Wednesday night, that number was down to 2.04. If you break the season up into fragments, you'll see the gradual improvement in pace.

That might not seem like much, but every tenth of a second matters in the NBA. Any pause in action can be the difference between an open shot or a contested one. An ill-timed jab step can turn a scrambling defense into a recovering one. Coaches talk about a 0.5 rule — making the decision to shoot, drive or pass in under a second — for a reason.

The Hornets went into the game making the same bet from their last outing: We're going to force the ball out of Young's hands, and see if the other guys can make good, quick decisions. Hunter made the bet look not-great in the first quarter, and slammed the door on it in the third.

In the words of Young, that's the type of aggressiveness the Hawks need from Hunter on a nightly basis.