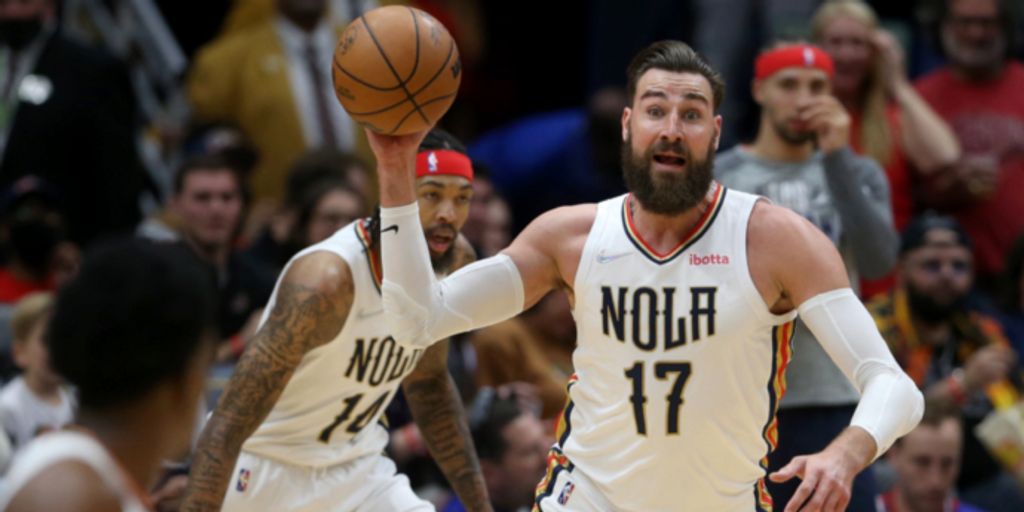 Explain one play: How the Pelicans are blending their Big 3 together

The New Orleans Pelicans are on a roll, having won four straight games and 5 of their last 7 overall. All five of those wins have come by double-digits, highlighted by Friday night's 124-90 blitzing of the Utah Jazz.

During the four-game winning streak, the Pelicans have posted a ridiculous 121.9 Offensive Rating. That's thanks in large part to the growing chemistry of their three best players: Brandon Ingram, CJ McCollum and Jonas Valanciunas.

All three have been productive individually during this win streak. Ingram (27.3 points on 67.3% True Shooting, 6.8 assists) and McCollum (23.8 points on 63.8% True Shooting, 6.3 assists) have been slicing up defenses from the perimeter, while Valanciunas (14.5 points, 70.6% shooting at the rim) has brought much-needed "oomph" on the interior.

The Pelicans have posted a 126.5 ORTG with all three guys on the court, an absurd number that matches the eye. What's been encouraging is how New Orleans head coach Willie Green has used the three together, in action, to put strain on defenses.

That strain is being conjured up in subtle ways, like spacing McCollum or Ingram one pass away while the other makes music with Valanciunas. The help defender then has to decide if he wants to provide assistance on the main action or stay at home so McCollum (42.4% on catch-and-shoot threes) or Ingram (36.3%, north of 42% in the two seasons prior) can't burn his team from deep.

The Pelicans have also been using them together in the same play. We've talked about Chicago action — a pindown that flows into a handoff — a ton in this space. It's a common action in the league, but it's common for a reason; it's an effective way to get defenses to bend.

Using Ingram or McCollum as a screener poses problems. Both guys require high-level matchups, but the difference in stature — Ingram's a lanky 6-foot-9, McCollum is a slithery 6-foot-3 — makes switching less than ideal. Smaller players don't have a prayer in contesting shots from Ingram, while bigger wings typically struggle with McCollum's ability to change direction.

That's before getting into the Valanciunas problem. You absolutely can't switch a small onto him; over the past three seasons, Valanciunas has generated nearly 1.2 points per possession on post-ups against guards, a top-three mark among 72 players with at least 75 reps, per Second Spectrum.

So you have multiple things at play. Ingram and McCollum screening for each other, putting the primary defender into a trail position or leading them into an unfavorable switch. Then, it's a 2-man game with Valanciunas, a scenario where you flat-out can't switch. And if you decide to fight over versus switching, both McCollum and Ingram are:

2) Good enough passers to feed Valanciunas if the defense cracks

That's how you end up with possessions like this.

The Jazz opt not to switch Mike Conley (McCollum's defender) onto Ingram, making it imperative for Royce O'Neale to stay attached to Ingram on the handoff. Ingram is able to establish inside leverage on the drive, then really puts the Jazz in a pickle by engaging Rudy Gobert on his gather. He freezes him just enough to open up the wrap-around pass to Valanciunas.

And here's the inverse, with McCollum as the handler instead of Ingram.

Ingram is able to bump Conley just enough to throw him off his path. McCollum is one of the craftiest mid-range artists we have in the league. He doesn't jet into open space; he hesitates, then darts to his right to put Conley on his hip before rising up for the floater.

It's been tough sledding for defenses as of late trying to contain this trio. In light of Saturday's news that Zion Williamson is rejoining the team as part of his rehab, there's a chance the Pelicans will be able to incorporate another pick-your-poison element into their offense.