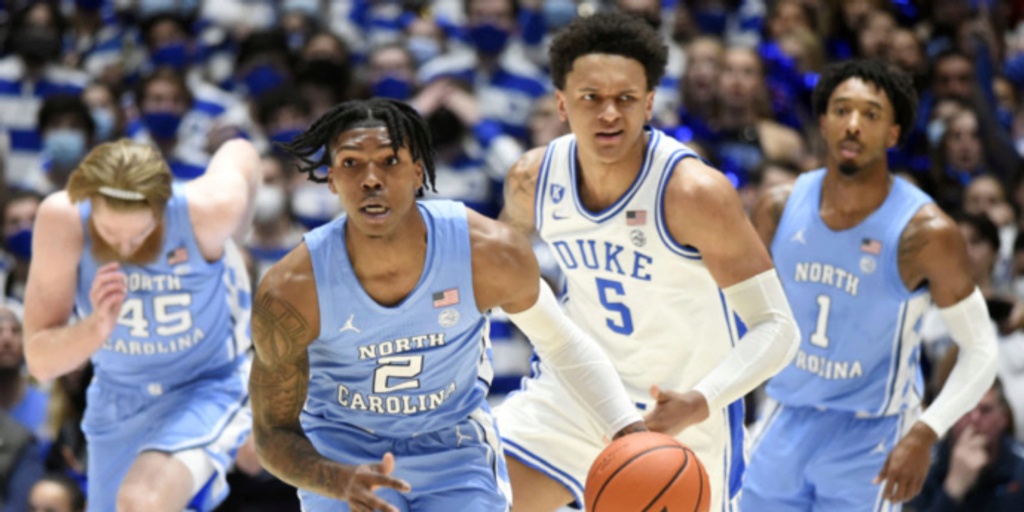 In a game where emotions were high and tickets were going for just shy of $80,000, the North Carolina Tar Heels were able to walk in and come away the victors over their rival Duke Blue Devils, 94-81.

Behind a strong team effort on the offensive end, UNC's starters scored 92 of their 94 points, and Armando Bacot led the way with 23 of them.

Quick playing with bro and put him in the Lottery… ACC Player of the year!!! pic.twitter.com/P1yNPVAQru

The Blue Devils were up 41-39 heading into halftime, with Banchero leading the way with 15 points. RJ Davis led Carolina with 11, and Manek was 3 for 6 from deep with 9 points.

Duke extended the lead to 50-44 just minutes into the second half, but Bacot went on a run and cut the Tar Heels' deficit back to two. By the under-12 TV timeout, Duke held a 56-54 advantage.

The Tar Heels went on top 65-61 at the 8-minute mark in part to Bacot really getting things going, plus a tough bucket from Caleb Love. Duke head coach Mike Krzyzewski called a timeout at 2:58 after a Wendell Moore Jr. three cut the Blue Devils' deficit to 79-74.

Manek would connect on another triple following the timeout to make it 82-74 in favor of UNC, and things started to get tense. Leaky Black and Bacot quickly scored baskets of their own, and that about did it. The Tar Heels came into Cameron Indoor and spoiled Coach K’s finale.

Love scored 22 for the visitors, while Manek hit 5 of 10 from deep for 20 points of his own. Davis had a great game for the Tar Heels with 21 points.

Banchero led Duke with 23 points. Blue Devils center Mark Williams posted 16 points and 13 rebounds. Roach had a strong showing, too, with 15 points off the bench.

The Blue Devils rank No. 6 in the NET and No. 5 in Adjusted Efficiency, making them one of the favorites to win the National Championship. Banchero, the potential No. 1 overall pick in this coming NBA Draft, continues to play well with 16.9 points per game. AJ Griffin, Williams, Keels, and Moore also have strong cases as first-round picks.

The Tar Heels entered this one as winners of four straight, and have moved up to No. 8 in the NET Rankings. They have the No. 25 ranked offense in the nation behind Bacot (16.4 PPG), Love (15.5 PPG) and the Oklahoma transfer, Manek (14.2 PPG). They will need a positive showing in the ACC Tournament to ensure a visit to the Big Dance.

Next up for Coach K and the Blue Devils? It's time to refocus and gear up for the ACC Tournament, where Duke will enter as the top seed. In March Madness, the Blue Devils currently project as a No. 2 seed.

North Carolina sits on the “Last Four Byes” line and is considered a Bubble Team — although this win will play huge with the committee.

While he ends his Duke career at home on a sad note, Mike Krzyzewski will be remembered for the game of basketball and his accolades, yes, but also for how he left his mark on people.

Before the game, there was a beautiful ceremony from over 80 former Duke players who made the trip to honor Coach K.

Some of those former players spoke to our BasketballNews.com staff.

A couple of weeks ago, Luke Kennard told our Spencer Davies:

He meant a lot [to my career]. Coach, he gave me an opportunity to play at the best university in the world, play for the best coach to ever coach the game," Kennard said. "It was a lot of fun. I mean without going there, [there's] no way I would be where I am today. He's great. He's such a family guy. Anytime I have a big game, he's always texting me like after the game. He keeps in touch with a lot of his players. I'm happy for him. He's done everything he's wanted to do while coaching the game. There's no better guy or coach for everything that's happened to him — he deserved it all. Happy retirement to him. He's gonna enjoy it now, he's gonna enjoy his family and grandkids. I'm happy for him though. I keep in touch with him all the time, and hopefully they can go out with a bang and try to get him a national championship this year. It's been fun to watch.

When a legend says "It’s time," then it’s time… His legacy comes down to winning. He consistently won in four different decades; that right there is unheard of. There are so many big-time coaches that have been in this game, but a lot of them most likely [won] in one or two decades. Not many have gotten to four decades and had the continued success that he’s had. I think another part of that legacy is that he’s created these relationships with players over and over again, so players continually wanted to play with Coach K. A lot of coaches get old; he never got old, he’s still not old. Even heading into his last season, he stays up-to-date, he’s adjusted to the times and he’s adjusted to the game. I think that right there is part of his legacy, the fact that he’s been able to change with the times of this game and not let it pass him up.

He’s helped me tremendously in so many different ways. First, I’ll start with basketball; he helped me be the best basketball player that I could be. The way he challenged me every day, the way he taught me to prepare every single day, how to approach the game every single day -- those were all lessons that helped me as a player. A lot of those lessons ended up helping me when I transitioned into my coaching career, too. All of those lessons that he was teaching are things that he does as a coach: he prepares better than anybody, he puts the time in, he watches film and he dedicates himself fully to his craft as a coach. That’s probably something that a lot of people don’t know about coaches: you put that same time in. And Coach puts in more time than anybody when it comes to his craft. Just being able to watch him and take notes... I’ve made sure to have a notepad and a pen in every single meeting with him because he’s always going to give you some kind of gem, some kind of lesson, that I can take with me and use in my coaching career when I deal with my players and, one day, have my own program.