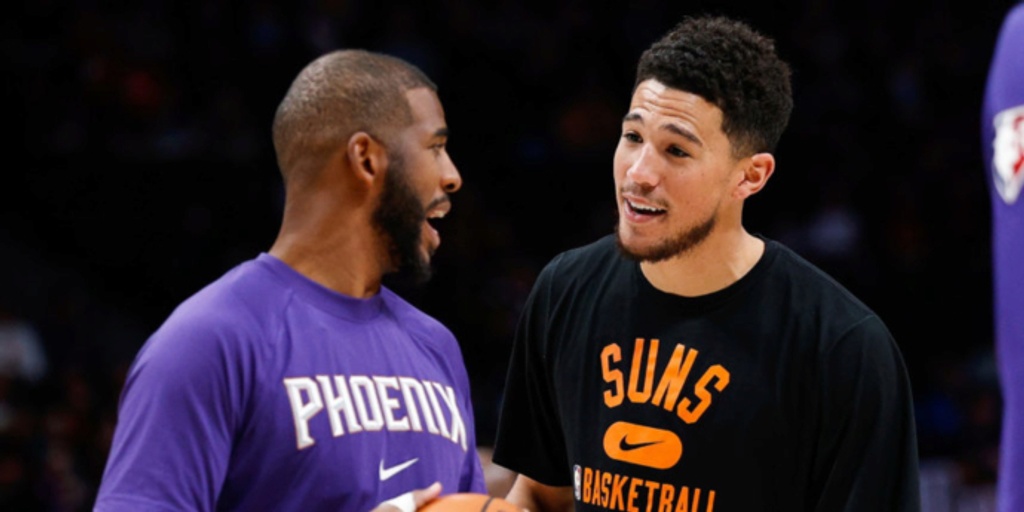 No Devin Booker, no problem for the Phoenix Suns in a pivotal Game 3 on the road against the New Orleans Pelicans. Even without their 25-year-old superstar shooting guard, Phoenix handled their business in the Bayou, winning 114-111 behind an absolutely incredible clutch performance from Chris Paul.

The Pelicans have done a great job limiting Paul’s effectiveness after a fourth-quarter scoring explosion in Game 1. However, CP3 found his antidote because the future Hall-of-Fame point guard stacked stellar sequences on top of each other when it mattered most.

Paul finished with 28 points and 14 assists, an effort punctuated by a full-on takeover when he re-entered the game with just over 10 minutes to go. Upon Paul’s reentry into that final quarter, he scored or assisted on 23 of the Suns’ 33 total points. During one pivotal 5-minute stretch, Paul was responsible for 15 consecutive points against New Orleans’ aggressive defense. Here's what that run looked like:

This jaw-dropping spurt from Paul was halted by a timeout on the floor, at which time Phoenix led 98-95 with 3:28 left. Without Paul’s brilliance in the most pressure-packed situations, the Suns might be staring down the barrel of a 2-1 series deficit without Booker presumably for the remainder of their first-round series.

Chris Paul was INCREDIBLE in Game 3, he spent the first 3 quarters setting up his teammates before DOMINATING the fourth quarter with 19 points to push the @Suns to the 2-1 series lead! @CP3: 28 PTS, 4 REB, 14 AST pic.twitter.com/qWfoqH7Q7S

Simply put, Paul wasn’t going to be denied in the Bayou. Paul’s teammates still are taken aback at points by these incredible moments of greatness. JaVale McGee, a fellow veteran on the Suns’ roster, noticed how much easier Paul makes it for everyone else on the court alongside him. Whatever coverage defenses are throwing at the Suns, Paul’s innate basketball IQ can help break any containment.

“I’m impressed every time I see it,” McGee said postgame of Paul’s fourth-quarter heroics. “He does the same thing. He’ll facilitate everybody else and then that fourth quarter comes. If we need him, he steps up and starts hitting those middies over and over. It’s just amazing the way he does it.”

Paul abused the Pelicans throughout the fourth quarter, hunting mismatches and taking advantage of those opportunities with patented mid-range looks. When Paul gets into a groove the way we saw late in Friday’s Game 3 win for Phoenix, it’s usually Game Over for the opposition.

Phoenix is the best team in NBA history for net rating in crunch-time minutes. Paul’s winning attributes shine directly onto the Suns’ success in these pivotal moments, which once more proved itself in a hostile road environment.

“They went to some switching. Earlier, they went to a normal coverage. There was some changing of the coverages, and they went to trap him. He just kept making the right plays,” Williams said of Paul’s fourth-quarter scoring burst. “I wish I could tell you there was some orchestration going on, but that’s just Chris. His ability to see the floor, obviously he can still score the ball, but he was still making the right play.”

No surprise, but Paul deflected praise back onto his teammates when asked about how he reached that level in the fourth quarter for Phoenix.

“I just picked my spots, you know what I mean?" Paul said. "I finally had a couple shots go down. I just try to be aggressive, listen to [DeAndre Ayton]. He kept telling me he was going to get me loose, and he told me to stop passing and shoot the ball. So, the shots went down.”

As the Suns took back control of their first-round series with the Pelicans, a matchup that continues to test them on both ends of the court, it’s hard to ignore these types of "GOAT" moments from CP3. Even without Booker, Phoenix feels firmly back in control of this series solely because of Paul figuring out how to attack New Orleans’ aggressive game plan.

"Trip ain't no good unless we get the next one" -@CP3 pic.twitter.com/3tovinK9Rk

“He’s just one of those players that plays the right way," Williams said of Paul. "He understands the when and how to create for himself and others. And the leadership qualities you don’t see in the timeouts are probably just as impressive as what he does on the floor.

"You can sit here all day talking about Chris, but knowing him the way I do know him, it’s over with," Williams added.”

Game 3’s outcome felt like a massive pendulum swing for Phoenix. Heading toward Sunday’s Game 4, the Suns have now pushed New Orleans into a desperate mentality. If the Suns bring the series back to Phoenix next week up 3-1, we’ll look back on Paul’s scorching-hot fourth quarter as the accelerant.