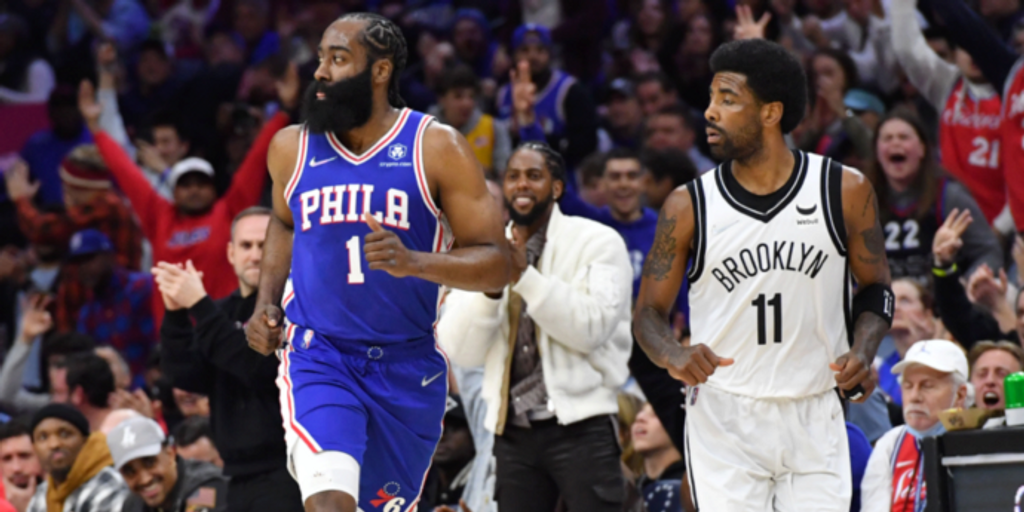 Nets-76ers kinda sucked, but we still want more, don’t we?

Admit it, you still want the series.

Hell, you probably want it even more now.

You still want a No. 2 vs. No. 7 matchup of the Philadelphia 76ers and Brooklyn Nets in Round 1, even though the potential prelude to it was as underwhelming as "Battlefield 2042."

We all come to basketball for different reasons.

Some of you just want straight hoops — buckets, athleticism, dunks, tough shot-making, etc. Some of you want in-depth, coach-like film breakdowns of the game. Then, there are those of you who want a balance with a little of both, but not too much of either. Others enjoy narratives, stories that transcend numbers and what may really fuel certain things leaving us in awe.

And then, there are the particulars who just want the drama — transactions, rumors, business, who hates who — and that’s really what Thursday night was about for a ton of viewers who experienced primetime Sixers vs. Nets on TNT.

The first video some of us saw featured Ben Simmons getting heckled after leaving his hotel and boarding what presumably was the Nets’ team bus. It sounded like... he was back in Philadelphia.

Simmons remains out with a reported back issue and needs to ramp up his conditioning. He still might not be mentally ready to return ⁠— perhaps it’s all the above ⁠— but the All-Star did join the Nets in warmups, and was serenaded by the Philadelphia boo-birds both before and after the game.

Ben Simmons was welcomed with boos in his return to Philly. pic.twitter.com/5ZSktchthL

This is the city that booed and hurled snowballs at Santa Claus in the 1960s, back when it was cool to think a jumbo-sized, red-pajama wearing, high-flying, sleigh-riding, chimney-climbing, cookie-eating, milk-drinking, white-bearded Caucasian dude existed.

So Simmons, justified or not, wasn’t going to be off-limits at all.

In the actual game, Kyrie Irving hit the first memorable jumper — a stepback in Harden’s face. Harden retaliated with one of his own just minutes later, his most memorable moment of the night, if we’re keeping it a buck.

The keystone moment of the contest, while it was still competitive, featured Kevin Durant and Joel Embiid jawing at one another after Embiid shouldered into Durant and knocked him on his ass.

KD and Embiid going at it 🍿 pic.twitter.com/kicLbz1Ubw

Quietly, Seth Curry might’ve talked more sh*t than anyone, and lit up his former team (his father-in-law's!) with 24 points and 5 steals while shooting 10 of 14 from the field and 4 of 8 from three. Embiid ended the night with an unimpressive 27 points and 12 rebounds on 5 of 17 shooting, though he made 15 of 19 free throw attempts. With 4 points in 29 minutes, Tyrese Maxey had his lowest scoring output of the season.

Sixers fans may have chastised Simmons early on and ridiculed the Nets throughout, but the night ended with them booing their own team, who is now 40-25 and third in the Eastern Conference (which will be a brawl until the finish). The Nets are back above .500 at 34-33, but are still just in eighth place and sit five games behind the Cleveland Cavaliers for the No. 6 seed, so Brooklyn is running out of time to avoid a Play-In Tournament scenario.

If you missed the quotes, there were some interesting ones.

Durant did initially downplay the significance of the win, indicating that the Nets didn’t win a championship or clinch a playoff spot, but admitted that the team did have some extra motivation given the hostile reaction to Simmons.

“We look at Ben [Simmons] as our brother,” said Durant, who the team with 25 points, 14 rebounds and 7 assists. “We knew that this was a hostile environment, and we knew that he didn’t have an opportunity to play, so we wanted to come out there and have them (the fans) focus on the court more so than just always focusing on him. They focused on the court tonight, and it’s hard for you to chant at Ben Simmons when you’re losing by that much.”

Harden, who finished with 11 points on 3 of 17 shooting — and missed all 8 of his two-pointers — admitted to getting his ass whooped while wearing an overly-puffy (and likely, absurdly expensive) jacket in his postgame presser.

“Tonight was good for us,” said a straight-faced Harden, who was spotted out on the town with Lil Baby and Travis Scott following the blowout. “We got our ass kicked. Since I’ve been here, everything’s been sweet, we’ve been winning games. And so, tonight was good for us, and we get an opportunity to come down to reality, watch film and just continue to get better.”

"Tonight was good for us. We got our ass kicked." pic.twitter.com/WWnq7fEqgY

Irving, who added 22 points, 5 threes, and 5 assists, also spoke after the contest.

“I think playing for Ben and this night meaning something to Ben — not only Ben, but Dre (Andre Drummond), Seth [Curry] — when you get traded in this league, it’s not easy to deal with,” Irving pointed out.

“We’ve tried to welcome them in with open arms. So, when we played tonight, we definitely felt like Ben was on our heart; you could see it, he was wearing it, and we just wanted to go out there and play for him and play well. Again, it’s not an individual thing for us. We all felt it; we’re all there. If you come at Ben, you come at us.”

"It's not an individual thing for us. We all felt it. We're all there. If you come at Ben, you come at us" - Kyrie Irving pic.twitter.com/xWvpdIah3U

Well, if we see these two clash in the postseason ⁠— and the first-round possibility is there — it’d be nice if the Sixers came for somebody.