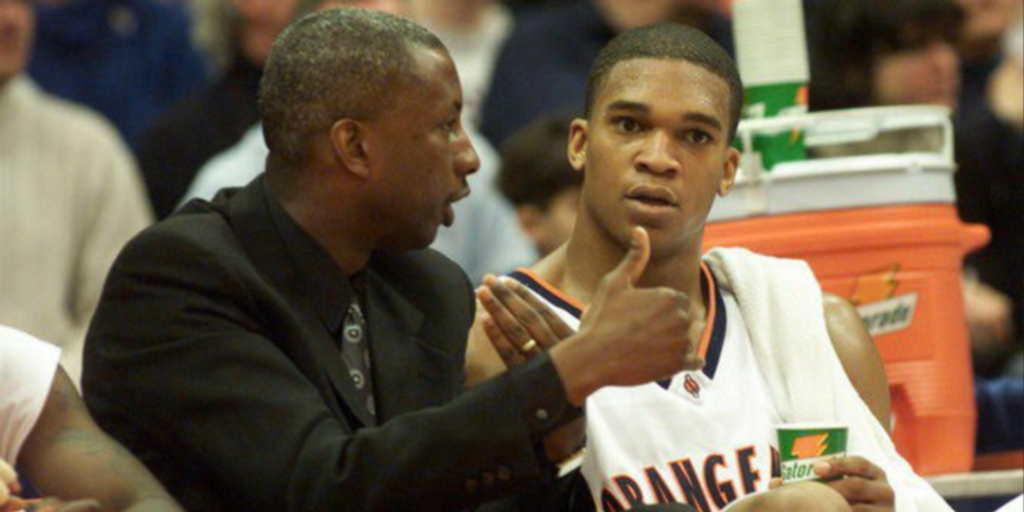 When a coach is more than a coach: Etan Thomas remembers Louis Orr

“On 12/15/2022, Louis Orr was called home to be with the Lord as his battle with cancer has come to an end. He was a dearly loved and devoted husband, father, grandfather, brother and friend. He will forever be missed!”

A STATEMENT FROM THE FAMILY OF LOUIS ORR
On 12/15/2022, Louis Orr was called home to be with the Lord as his battle with cancer has come to an end. He was a dearly loved and devoted husband, father, grandfather, brother and friend. He will forever be missed! pic.twitter.com/VPn8AO1kSn

This news hit me and my wife Nichole like a ton of bricks.

Coach Orr actually introduced me to Nichole during our freshman year at Syracuse back in 1996. She had already caught my eye a few days prior, and I remember it clear as day. Coach said to me, “Etan, I have someone I want to introduce you to. She’s a nice young lady from Cali and she plays on the women’s team. I just think you two would vibe really well."

And we have been vibing ever since. In fact, decades later, we are married with three kids and just celebrated our 18th year anniversary.

For me, Coach Orr was much more than a coach. I could quote him for days, but some of the best advice he gave me was when he told me this:

“Basketball is not supposed to be easy. There is a reason only special people make it. They don’t quit when things get tough. They don’t point the finger at everyone else. They make adjustments and learn from every game — whether they score 20 or hardly play.”

These were his words to me during my freshman year. He told me this while I was going through my “freshman blues” stage at Syracuse. Now, if you don’t know what the freshman blues are, I’ll explain.

It was my first time away from home. I was homesick, and missed my family and friends. Basketball wasn’t going the way I expected it would go. It was cold, it started snowing and it just wouldn’t stop. I had what felt like a never-ending cold, and I discovered that the coach who recruited me was not the same nice, smiling, joking person who sat in my living room on my recruiting trip.

I went from being a blue-chip All-American, back-to-back state champion at Booker T. Washington High in Tulsa, Oklahoma — and the No.1 player in my class in the state — to being at the bottom of the totem poll at Syracuse. I mean the very bottom. Couldn’t get any lower.

I was playing behind senior center Otis Hill, who the previous year had gone to the NCAA championship in '96 with that special group of John Wallace, Lazarus Simms, Todd Burgan and Co. I had a lot to learn. Looking back on it now, playing against Otis in practice every day my freshman year really showed me how hard I needed to work to be successful in the Big East. Back then, every night there was another dominant monster we would be playing against — Jahidi White at Georgetown, Jason Lawson at Villanova, Adonal Foyle at Colgate, Danya Abrams at Boston College. There were literally no nights off.

I remember thinking that maybe he recruited the wrong person. Maybe he thought I was somebody else because it doesn’t seem like he liked me at all. And to be honest, I didn’t like him very much either. (Again, just being honest.)

But Coach Orr wouldn’t allow me to pout, catch an attitude, stop working hard, feel sorry for myself, give up, quit, lose my temper or flip out on Coach Boeheim (which honestly almost happened). He consistently wrapped his arm around me, encouraged me, imparted wisdom and made me keep working.

I remember the first time he came to me after a game; I played probably all of two-and-a-half minutes, but somehow I still got fussed at as if I was the reason we lost. I remember thinking, “I did all of that wrong in two-and-a-half minutes?” And Coach Orr must’ve seen me at the point of snapping. He came to me and whispered quietly in my ear, “Meet me at the gym at 10 p.m.” I remember being like, “Excuse me, did you say at 10 p.m. coach?” But he saw I needed it

So we had an angry workout. Hard, violent dunk drills. Aggressive power moves. He had one of the managers (or someone he just brought to the workout) bang me with the pad, and I would have to power through the contact and make my move to the basket over and over again. We were there for maybe two hours. So once I reached the point of exhaustion, he came over and sat down next to me on the floor. He asked, “You feel better now?" And honestly, I did.

After that, Coach Orr's message to me was to keep working, do extra, stay locked in, find out what coach wants and do that, and stressed that it was the only solution. Keep working until it is apparent that it’s a lost cause, but in order to get to that point, you have to make sure you are doing everything possible on your end. He told me that I wasn’t the first player on earth to be unhappy with their situation on the court, but it was how I handled it and what I chose to do in order to overcome this hurdle that would set me apart.

He said anybody can quit. People quit all the time. He told me that he’d been in situations where a coach didn’t have the confidence in him yet and he had to prove himself. He told me there were situations where he felt like it was literally him against the coach. But he had to make it so the coach couldn’t take him out of the game even if he wanted to, and that’s exactly what I had to do.

Coach Orr also told me that things would get better and that I’d get past it, but to not forget that feeling when I did have success, but to remain humble and hungry. Don’t ever get complacent but keep this same drive, passion, anger, tenacity, chip-on-your-shoulder mentality — even when Coach Boeheim starts singing your praises and the papers start raving about you.

He also said that there would come a time where I am going to be encouraging someone else who is in the same situation that I was in and don’t know how to handle it. And sure enough, that’s exactly what I did with Jesse Edwards throughout his early years at Syracuse.

We started going to church together on Sundays, and Coach Boeheim actually moved practice to a little later in the day on Sundays so we could keep our church routine.

I can easily say that if it weren’t for Coach Orr, I wouldn’t have made it through Syracuse. He had become much more than just a coach.

The thing is, he didn’t have to do any of that.

That’s what makes a coach more than a coach. Anyone can draw up plays or drills or point out when you aren’t doing what you’re supposed to be doing. But a coach who takes an interest to learn a player's needs, situation, mind state, temperament and understands when they need encouragement because they’re down, when they need to be fussed at because they’re messing up, holds them accountable, doesn’t crush their spirit but uplifts their spirit — it’s just special.