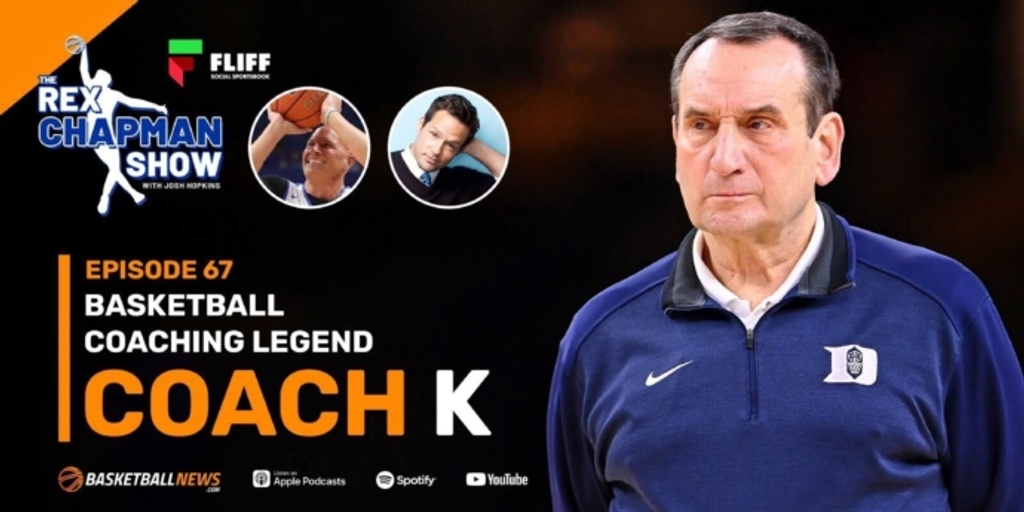 On the latest episode of The Rex Chapman Show with Josh Hopkins, the guys are joined by the legendary Mike Krzyzewski a.k.a. Coach K.

During the show, Coach K revisits his incredible tenure at Duke and watching the team play under Jon Scheyer now, the Redeem Team, his coaching philosophy and much more. Watch the full episode below:

7:00 - After a storied career, what is Coach K up to these days? What's life after coaching like for him? There's still plenty of basketball.

9:15 - Is it difficult watching Duke basketball from a different capacity? Are there any regrets after leaving the bench, and now watching Jon Scheyer take over as head coach?

11:30 - What did Coach K see in Scheyer in his playing days at Duke that made him the perfect archetype to be a great coach?

18:30 - Where did Coach K gain his unparalleled work ethic? He goes back to his childhood and what he learned at West Point, and discusses what he continues to use to this day.

22:30 - At West Point, it wasn't just learning from Coach Bobby Knight on the basketball court, but there were so many facets of leadership and life skills he learned at the academy.

28:00 - On the recruiting trail, Coach K always made it a point of emphasis to understand what a player's relationship was with their mother, and you could learn even more if they had an older sister.

31:30 - With the success Coach K has had, especially in the NCAA Tournament, he describes how several of his teams may have been worthy of a national championship, but may have fallen short because the one thing you can't fast-track is experience.

42:00 - Where coaching USA Basketball ranks among the accomplishments of Coach K's career. To him, there's no greater honor than representing your country on the world stage.

45:30 - What was so special about The Redeem Team of 2008 under the leadership of Kobe Bryant? It was about winning a gold medal, but more so about winning the respect of their country.

48:00 - Kobe Bryant approached Coach K in 2008 and asked to guard the best player on the opposing team: "Most people don't dream of moments."

52:00 - Coach K says Rex Chapman was one of the players Coach K always wanted to coach because he had a spirit and passion for the game.

54:00 - Coach K recalls "The Shot" and gives the guys his view of those final seconds in that incredible victory over the Kentucky Wildcats. It was at that moment he recognized he had to say something to the team he had just beaten.

59:00 - What Coach K's expectations are for Kentucky this season, and how hard it must be for John Calipari to have to go out and win every game for the fans.