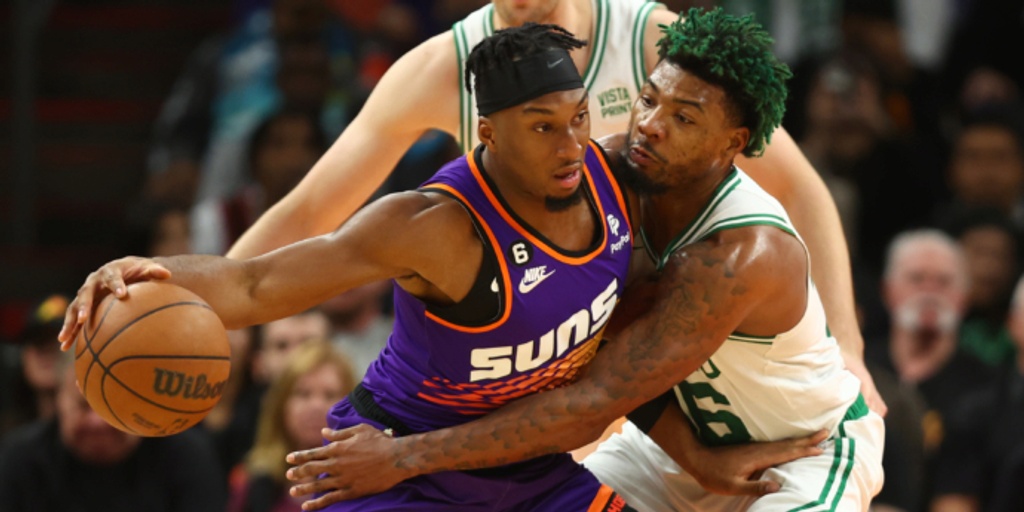 It's time to lay to rest any remaining doubts on the legitimacy of the 2022-23 Boston Celtics defense.

The Celtics and Phoenix Suns squared off in a battle of top seeds Wednesday night, but the ensuing contest was far removed from such a thriller. Boston took on Phoenix's humming offense — ranked second in the NBA entering the matchup — and held it to 65 points through three quarters as part of a 125-98 drubbing in Arizona.

This game was never close, and while Boston's historic scoring pace kept up, its defense also returned to its imposing presence we saw in the second half of last season.

According to Cleaning the Glass, the Suns sported their worst single-game rates of the entire season in: Effective Field Goal percentage (40.0%), turnover rate (19.2%) and points per 100 plays (83.3). Those numbers do not include garbage time, which CTG categorized as... the entire fourth quarter.

Despite missing their top two bigs in Robert Williams III and Al Horford, Boston turned in its statement outing of the season. They had some help — Phoenix shot a ghastly 17% from beyond the arc and missed several makeable perimeter attempts — but the Celtics did what they have done most of this season: Dare teams to beat them in the mid-range and keep driving advantages at a minimum.

The Celtics defense was quite good last night. Here’s an example of how they approached Phoenix’s base Booker-centric actions and what worked!

The Celtics outscored the Suns 73-44 between the second and third quarters, and their onslaught began around the time of this defensive possession. Their key defensive mission was to make life uncomfortable for red-hot scorer Devin Booker and, in his first game back from injury, Chris Paul. In the above clip, we see how they key in on a Suns set designed to get Booker driving at high speed, and use their second-side help defender to muck up Booker's options (check out the video for a breakdown with sound).

A similar turnover unfolded soon after, and highlighted that the job wasn't done at the second-side help. Derrick White has been playing at an All-Defense level this season. Here's an example of his greatness:

Why is Derrick White so important to the Celtics defense? One reason: his ability to rotate, process, and intercept.

I’ve noticed him do this a few times in the corner recently and wanted to show how remarkable he is. Breakdown 🎙 pic.twitter.com/Tyk6SPqtTk

Bringing help from the second side is a pragmatic way to stop a scorer from succeeding on an initial drive, but it only works if the surrounding defenders stay aware and rotate with urgency. The Celtics have reached that level of focus, spearheaded by the guard trio of Smart, White and Malcolm Brogdon.

However, the larger challenge for Boston would be: Can Blake Griffin and Luke Kornet contain the Suns when they get to the paint? The answer, impressively, was yes.

Let's spotlight Kornet for more than his polarizing "Kornet Kontests" (or Eclipses, whatever you want to say). The Celtics had both him and Griffin in the same basic defensive roles they've played all season — deep-drop-coverage big. As long as they kept driving Suns players and rolling bigs in front, they could stay in position for a contest. Deandre Ayton and Jock Landale don't shoot the three-ball particularly often, and Boston was perfectly happy to let them shoot mid-range jumpers.

This was one particularly impressive play where Kornet perfectly reads Paul's intentions. He obviously has unique size and length at 7-foot-2 that makes opponents think just a bit longer. But Kornet never bites on CP3 shooting the ball and recognizes the lob when it's coming.

The above clip was an exemplary possession, but Kornet had several other moments where his presence alone convinced players to opt for mid-range pull-ups and floaters versus drives all the way to the basket.

The Suns took just 25.0% of their shots at the rim, though they're not a frequent interior scoring team anyway. However, they attempted 32.9% of their shots in Cleaning the Glass's "short mid-range" area between 4-to-14 feet from the basket — their third-highest frequency of the season — and made just 31.8% of those shots. It was an ugly performance that underscored what the Celtics have tried to do all season: Funnel teams into taking middies.

Boston wields the third-best Defensive Rating in basketball (107.2) in its 7-1 stretch over the last two weeks. That includes shutdown efforts against high-level offenses in Brooklyn, Sacramento and Phoenix. This unit knows how to contain some of the greatest scorers in the game and knows how to catch up when those scorers move the ball. That's a pretty scary combination.