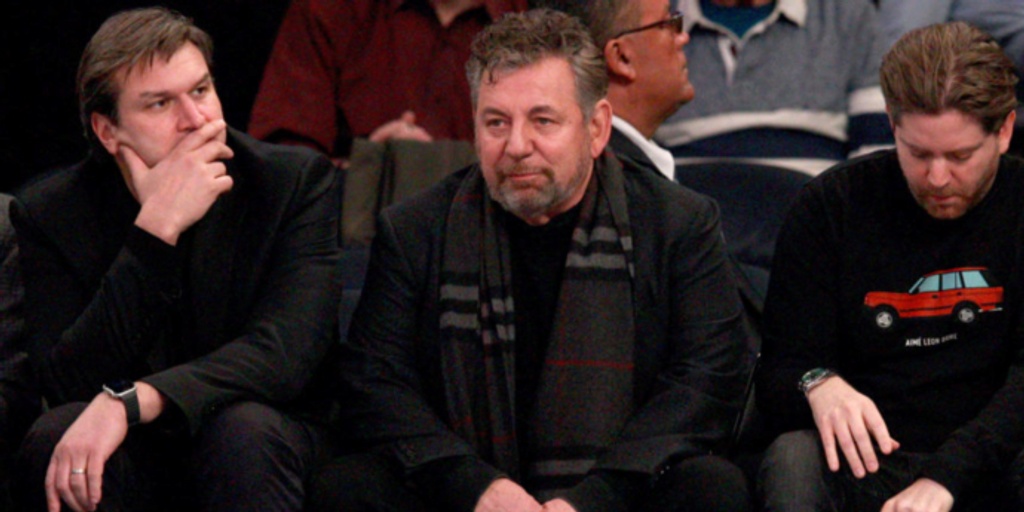 Will the Knicks' success give James Dolan a pass? Scoop Jackson says no

From the year 2000 to the present day, New York Knicks governer James Dolan has been despised by most New York Knicks fans. I don’t think we’ll have too many people who argue that point with me, and the reasons as to why definitely vary.

First, let’s go over the stats.

For the last 21 years, Dolan has cycled through eight front-office leaders, 14 head coaches and countless supposed “saviors" with subpar winning percentages, all while an arms-folded Dolan was pouting on the sideline game after game. That goes without mentioning a number of lifetime bans, including beloved Knicks warrior Charles Oakley, who was the heart and soul of the franchise. The image of Oakley being accosted by Madison Square Garden security guards will probably anger Knicks fans for the rest of their days. And in addition to all of that, prior to this season, the Knicks only mustered up five playoff appearances, four winning records and one postseason series win, while recording more losses than any other NBA team for the last two decades with Dolan at the helm of the organization.

The perception was that he was a boss who doesn't seem to understand his job, but kept meddling in everyone else’s. He never allowed the people he put in place to actually do their job, and fumbled any potential superstars signing with the Knicks who may have genuinely wanted to come to the Mecca. Further, the perception has been that he undervalues fan-favorite players when free agency arrives, and they leave as a result -- something that Knicks fans are currently praying to the basketball gods doesn’t happen with Julius Randle.

But nowadays, the feeling is different in New York, as the Knicks are currently 37-29 and would be the fourth seed in the Eastern Conference if the playoffs started today. They say winning cures everything, and now we see longtime frustrated, over-emotional New Yorkers repping their Knicks and talking about their team with pride.

Full disclosure: I grew up a Knicks fan. My grandfather was, too. We were both passionate, emotional fans that wore our heart on our sleeve when it came to our Knicks. We took losses to heart and yelled at the television screen. We cheered when we won, and felt the Knicks were going to win the championship for many, many years. So I can relate to the emotional fans in New York. I felt their pain in years past, as well as their jubilation this season as the Knicks faithful definitely have a lot to cheer about.

Derrick Rose, who everyone in the NBA is rooting for, has had a comeback-of-the-year-worthy story in one of the toughest places to achieve that, New York. The same Knicks fans who booed him in his first stint are now singing his praises -- a difficult task to achieve. We actually see Derrick Rose smiling, which was definitely not the case during his first stint there.

Then you have Julius Randle, whom Charles Oakley told SiriusXM Radio “is a better version of Zion Williamson.” The praise doesn’t get much higher than that.

"Now they got a superstar"

Even when the Knicks lose, they are exciting to watch. They play hard the entire game, leaving it all out on the court and giving maximum effort. It's reminiscent of the good ol' days with Patrick Ewing, John Starks, Charles Oakley, Anthony Mason, Derek Harper, Greg Anthony, Latrell Sprewell and Larry Johnson. Those Knicks teams played with all heart, all the time.

So, the question now becomes: has the tide shifted in the perception of James Dolan? Does the success of the team this year erase the anger and vitriol New York fans felt for two decades due to the perceived mismanagement of Dolan? Will the “Fire Dolan” signs that once populated MSG read “Dolan Is The Man!" now?

On my radio show in Washington D.C. with Dave Zirin, "The Collision: Sports And Politics," basketball historian and NBA insider Brandon “Scoop B” Robinson gave us his opinion:

“Many people thought it was a foregone conclusion that the Nets were going to be the only ticket in town. And the Knicks had different plans this season... When you look at the Knicks, and you look at Dolan specifically, Knicks fans are passionate fans and knowledgeable fans. But I think Knicks fans were, one: living in the past, and two: did not have the accoutrement to make them happy to be Knicks fans," Robinson said.

"I feel like they’ve always laid the blame on Dolan because they weren’t a good team... But now, those criticisms have quieted down quite a bit. The Knicks are a feel-good story for the NBA as a fourth-place team if the playoffs started today. I think Dolan is off the hook in the eyes of Knicks fans this year, but I still do think they gotta finish what they started. I think the Knicks fans had a right to be upset, but it’s only one year. The last time they made the playoffs was 2013, but this year, it’s a different story, so now Knicks fans can drink cucumber water and sprout sandwiches with the crust cut off and be happy.”

ESPN’s Scoop Jackson has a very different opinion, as he told me for the purpose of this article.

“To me, Dolan is not getting a pass, he’s simply being overlooked. We all know what is happening right now with the Knicks is happening in spite of him, not because of him," Jackson said. "Real basketball people are back cheering for the Knicks because we are cheering for Thibs, Leon Rose, Worldwide Wes and Derrick Rose. All of them are underdogs in their own special way, and New Yorkers know how each one of them has been counted out by larger parts of society during parts of their careers. Any applause for Dolan (if there is any) is for him hiring Leon and Wes, and getting out of the way for one of the few times during his tenure as owner. So in a lot of our minds, Dolan’s not even there and none of this ‘New Knicks’ love has anything to do with him.”

Elements of both opinions from the two Scoops may very well be true. And for those that don’t know, James Dolan isn’t only the governor of the New York Knicks, but he is executive chairman and CEO of Madison Square Garden Sports and Madison Square Garden Entertainment, and executive chairman of MSG Networks. And as the companies' chairman, Dolan oversees all operations within the company and also supervises day-to-day operations of its professional sports teams -- the New York Knicks and New York Rangers -- as well as their regional sports networks, which include MSG Network and MSG Plus.

I say all that to say this: he’s not going anywhere, whether the Knicks do well or do terrible.

But this season, the Knicks have definitely given New York plenty to cheer about.