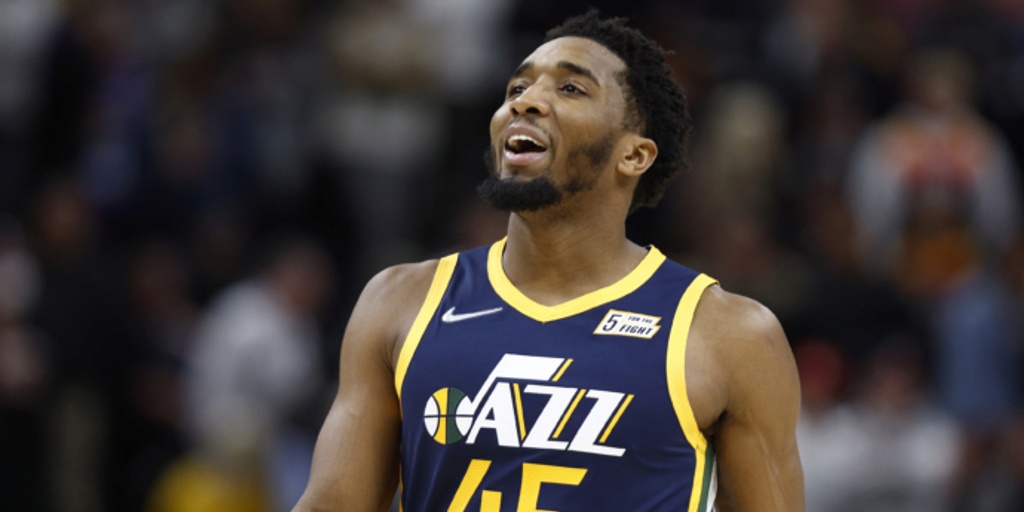 On April 28, Shaquille O'Neal kept his weird vendetta against Donovan Mitchell alive on his podcast, "The Big Podcast with Shaq." O'Neal was discussing James Harden's postseason struggles and managed to turn the conversation toward Donovan Mitchell's candidacy as an NBA superstar.

“Y’all be giving out a lot of these awards to some of these bums and I’m like, ‘What?’" O'Neal said. "For example, what did I say about Donovan Mitchell two years ago? Everybody jumping on me and hating and I be quiet. What’s he doing now?... Is that what superstars do?”

O'Neal then defended his comments in another recent episode. This slander obsession dates back over a year to a bizarre postgame interview on TNT. Unfortunately, it's also become part of a larger narrative working against Mitchell's NBA career.

Mitchell's superstar credentials have gone under the microscope as trade rumors erupt around the 25-year-old this summer. The Utah Jazz have failed to surpass the second round of the playoffs with Mitchell running the show. He's a smaller combo guard at 6-foot-1 with run-of-the-mill, basic shooting splits. He played pretty poorly in this year's first-round series loss to the Dallas Mavericks.

Is this a player worth mortgaging the future to acquire?

In a word: Absolutely.

Regardless of what O'Neal or any other detractors might say, Mitchell is a certified superstar, a number one scoring-and-playmaking option and a tier-altering presence for any NBA franchise. He is not without his flaws, but this type of gravitational offensive force rarely becomes available.

Let's start with the scoring and get the "inefficient" buzzword out of the way.

Mitchell has never been among the elite shooters in the league, but he's made strides throughout his career. Last season he sported a 50.9% Effective Field Goal percentage on pull-up shots. That's very good; it placed him 15th among 107 players who attempted at least 150 such shots, per Second Spectrum.

Mitchell shot the fourth-most pull-up threes in the NBA last season (413) and hit 35.6% of them, which was in the ballpark of guys with better reputations like Luka Doncic, Khris Middleton, Devin Booker and CJ McCollum. Mitchell has improved his eFG% in each subsequent year of his career, with last year being his best yet.

His overall three-point clip was just 35.5%, but that's because he had a bizarre, outlier year where he hit just 34.6% of his catch-and-shoot treys. Mitchell has never been below 40% off the catch in any other season. It's reasonable to call 2021-22 an unfortunate down year when he has four prior seasons of success.

Mitchell's average three-point shot distance was a whopping 26.4 feet from the basket, per BBall Index. A remarkable 52% of his three-point makes were unassisted, which is in the 98th percentile among combo guards, per Cleaning the Glass. He has one of the toughest perimeter shot diets in the league, and has maintained a quality mark from deep.

Then, we zoom in closer to the basket. Mitchell made a strong 65% of his shots at the rim this season, according to Cleaning the Glass, and 80% of those makes were unassisted. In total, Mitchell created 71% of his buckets without an assist last season, the 12th-highest rate in the NBA. Mitchell has had to manifest so much for himself in Utah, and still manages to cobble together solid shooting splits.

Mitchell's volume should not diguise him as a pure scorer. He's demonstrably better at finding shooters on the floor, in addition to his synergy with Rudy Gobert. According to Second Spectrum, 16.3% of Mitchell's passed led to assists or free throws last season, good for 14th in the entire NBA.

That rate was also his best of the last three seasons, and while it's partially dependent on teammates making shots, it also shows Mitchell is finding his guys in good positions. BBall Index also tracks a stat called Box Creation (initially made by Ben Taylor), which estimates how many open shots a player creates for teammates. Mitchell's score this season was 10.3, ranking in the 97th percentile.

The vision is apparent. Mitchell is such a dangerous downhill threat that defenses simply have to collapse on him. He knows how the second level will step up to contain him and where the next defensive rotation will be, as seen in the first and third clips. He has improved at making the corresponding reads without significantly altering his turnover rate.

Is Mitchell one of the best and most willing facilitators in the NBA? No; he averaged a pretty mediocre 41.7 passes last season to go with 5.3 assists per game. But there's a clear pattern of growth that bodes well for his future in Utah or with another team.

Mitchell's volume of difficult shots often gets warped as a ball-hog tendency. But look at who Utah has as actual well-rounded offensive engines. Mike Conley still provides solid moments and moves the ball well, but he has not been an attacking threat for several years now. Jordan Clarkson is a pure scorer with jarring peaks and valleys. Bojan Bogdanovic is transitioning to more of a spacer role. Mitchell is wholly in another category as a player who can both create a shot for himself while being a threat to pass.

With all of that said, we can't gloss over the defense — particularly in the latter stages of last season.

Donovan Mitchell's defense was better the last few games IMO, but he still has some really rough lapses. Seems to totally misplay this coverage: pic.twitter.com/MKahyif9ch

Mitchell really faltered on a national stage. As he struggled to find an offensive rhythm, he continually played behind the play on defense. Whether it was a lack of effort, confusion or something else, he was clearly out of position and not extending himself on several possessions against the Mavericks. And the concerns had been rising before the postseason too.

I see Donovan Mitchell's off-ball defense continues to be suspect.

(He ain't the only at fault though. Seems like House failed to communicate a switch. Which seems to be a team-wide problem at times.) pic.twitter.com/g5RXNfcZJo

Outside of Gobert, Utah was in a rocky defensive state by the playoffs despite finishing the regular season with a top-10 Defensive Rating. The Jazz's defense was 4.6 points per 100 possessions better without Mitchell on the court, per Cleaning the Glass.

But if there's a bright spot, it's in his 1.9% steal rate. Steals and steal rates tell only a tiny picture of overall defensive impact, but within those steals, we can see promising moments.

It's not like Mitchell is constantly losing the plot as a team defender. In these plays, he recognized who was going to be open of the drive, and shut off the faucet to pick up two steals. Mitchell is strong and active with his hands to the point where he can be a tough individual matchup for smaller guards. It's just about consistency right now. He has the tools to be a neutral or slight positive, and has shown defensive ability in the past. For whatever reason, it fell apart last season.

Lastly, it's worth dispelling the notion that Mitchell does not impact winning basketball. The Jazz boasted the best Offensive Rating in the NBA last season. They were third in the metric in 2020-21 en route to the No. 1 seed in the Western Conference, and it's no coincidence that Mitchell was the offensive catalyst in both years.

And, even with last season's playoff dud, Mitchell's career postseason stats include 28.3 points, 4.9 rebounds and 4.7 assists per game to go along a 55.8% True Shooting percentage. He's not even two years removed from a 57-point postseason onslaught in the bubble. And he's still only 25 years old.

The Athletic's Shams Charania reported Monday morning that the Washington Wizards, Miami Heat, Toronto Raptors, Atlanta Hawks, Sacramento Kings and Charlotte Hornets have expressed interest in trading for Mitchell along with the well-documented New York Knicks rumors. Though teams should obviously do their due diligence and look at roster fit and outgoing talent, it's hard for me to see why any of these teams should outright balk at the chance to acquire a sure-fire All-Star and perennial All-NBA player.

Do Fred VanVleet and OG Anunoby's defensive talents outweight the chance to bring Pascal Siakam one of the best possible long-term partners in crime? Should the Knicks hold up at the chance to add by far their greatest offensive talent since Carmelo Anthony? Are future picks going to be the impasse when Mitchell could conceivably keep a team in playoff contention for several years?

I'm not here to be the judge. But if a blockbuster trade does materialize, it's worth remembering just how special this type of 25-year-old superstar can be.