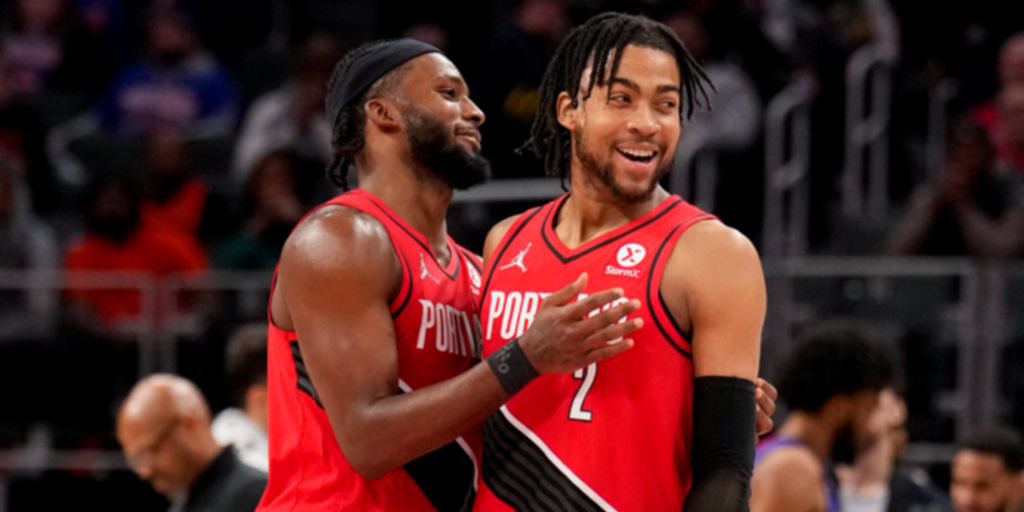 Trendon Up: Trail Blazers rookie Watford is coming along

As every regular season inches toward its end, things tend to get wonky for the teams south of .500. Being somebody who always searches for progress or development, it makes things murkier when Josh Hart has a 25% usage rate (10% higher than his career usage). Shout out to Hart and his season, though, because he's been absolutely on one.

Yet, that's kind of the point of trying to sift through post-All-Star break basketball: Is Hart a primary option moving forward? Nah, but I do think he's shown some stuff in Portland (which has flashed in NOLA) that further solidifies that he can handle more on-ball reps and ball-screens than previously thought. Trying to extrapolate what a more normal competitive situation could look like without overdoing it is something I'm definitely trying to get a better grasp of. So much is context-dependent.

Justise Winslow has played some really quality ball for the Blazers when healthy and in the lineup, but we're here for the purposes of the man who grabbed the mic.

I have absolutely no idea what to make of Trendon Watford's play.

In March (10 games), Watford's played 29 or more minutes in every game, averaging 15.6 points per game on 57.2% True Shooting (right about league average); he's expanded upon his intriguing ball skills and passing flashes he's shown since entering the rotation. The defensive flashes of upside give me pause as well.

That said, the Blazers have also lost by double digits in six of their March games with a minus-19.2 point differential per Cleaning the Glass. The Thunder have the second-worst point differential in March... at minus-13.8. Yeah, it's been rough in PDX.

So again, there are wrinkles in judgment and evaluation (and woooo boy, that is A WRINKLE). However, I must admit that I'm pretty bullish on what I've seen from Watford, the undrafted rookie.

It's been a wild ride for me, as I was lower on him coming out of LSU and really wasn't sure what to make of his environment there and some of his inconsistencies, but he's repeatedly drawn me in with his play and improvements this season. No, I'm not there with a starting spot, but the flashes have been on full display, and he's starting to string them together with more regularity. I can see the vision of Watford on a solid team, adding an element as a bruising dribble-handoff operator, short-roller and potentially versatile defender in time.

Watford opts more for brush screens, which can seemingly be frustrating and go against conventional screening wisdom, but he's so good at opening himself up to attack the basket while drawing the attention of the man he's screening. I would definitely like to see him set screens with more impact, but it's worth noting that screening without contact is an art in and of itself, and man, Trendon's pretty effective with it. He's solid at slipping and is fantastic at flipping his hips into a roll/into space.

He's not a crazy explosive leaper as a roller, with most of his value coming from his touch in the intermediate areas and his ability to open lanes for the ball-handler. He's shooting 49% from 4 to 14 feet, per Cleaning the Glass (72nd percentile amongst bigs), which teeters on the line of danger for opposing defenders. If he does sell out for contact to screen the handler open, his slow roll and the potential for a pocket pass or toss back can scratch an itch for his defender. Even if it's not as effective or efficient as a layup, there's a legitimate annoyance factor to having a floater or push shot hit right in front of you just out of your reach.

It's worth noting, however, just how difficult this diet can be as a player. Watford has made it work, but as we've seen with other touch-based rollers like Bruce Brown for instance, a drop in that floater efficiency or confidence can belittle impact and make it much easier for the defense to sell out at the rim on drives. Watford's got solid craft around the rim and touch, but he struggles with length around the basket — especially if he doesn't have a head of steam or an angle to use to his advantage.

That makes the development of his jumper and pick-and-pop game even more intriguing and instrumental to his maturation. His shot is pretty slow right now; there's inconsistency in his shot prep (feels most comfortable with a hop step in my viewings), and he can be hesitant at times, but he's been more willing as of late. An offseason with shooting work and more instilled confidence in taking his shot off the pop could do wonders for him. His ability to attack off the catch with a coordinated handle and legit counters while getting downhill have been quite impressive.

He's getting to the line 4.2 times per game according to Basketball-Reference, and the majority of those trips have come from getting fouled as he batters towards the rim. He's not bursty per se, but he has a pretty violent and quick motion into his downhill drives at times that can really take 5s by surprise. My vision for him (and it seems Portland feels similarly) is being a combo big who can make the most of himself as a mismatch 5, attacking with his skill in a spread-out offense; so, the shot is key to keep his best attributes sustainable.

His playmaking is solid, as he displays quality court vision and ball placement on passes. His best reads come out of DHOs or on a quick roll — although, I do think ironing out the speed with which he makes reads and passes will be important in his development — but he's already made strides in that regard since college! If the defense is lacking, he'll find the open man more often than not.

Defensively, much of Watford's intrigue comes from what he could be rather than what he's doing now. It cannot be undersold just how bad Portland's defense has been the last month. He makes rookie mistakes and can get back cut against. He doesn't always make the right rotation, and he can be too aggressive overplaying on the perimeter.

However, I'm really encouraged by the flashes. Portland has opted for more switching and playing their bigs closer to the level of the screen with backline rotations. Watford has shown agile feet and the ability to use his length on the perimeter to deter ball-handlers. He's got pretty good hands, even if they're hyperactive at times! He can foul, like, a lot (4.2 fouls per game in March), but I tend to think it's easier to reign in defensive aggression than to instill it.

He's had solid moments rotating as the low man. He certainly needs to clean up his footwork, technique and timing, but so do the majority of rookie-scale players.

The foundation of mobility, coordination, length and instincts is there, and honestly, it's a lot better than I saw or expected last year.

Overall, I'm really impressed with how Watford's game has come along. I don't know exactly how I would project him moving forward, but I feel more confident today than I did in the past that he can contribute to winning play and flourish in a role. He's doing things, and while it's hard to quantify what it means in this context, it's still meaningful.

Trendon Watford is an immensely talented player, and he's putting in the work to put it together. In time, I can't wait to see what he looks like on a team that's more cohesive and he looks to further establish himself in the league.