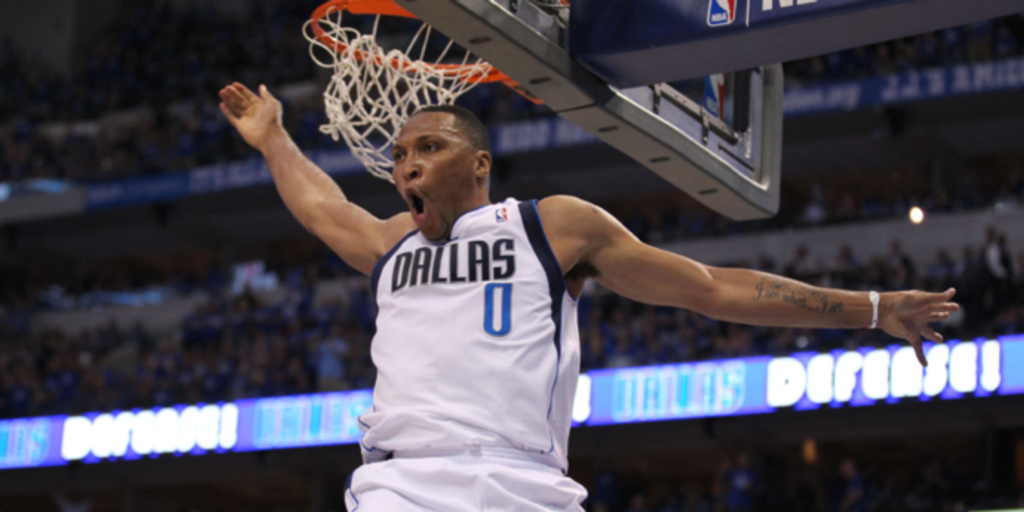 Shawn Marion wants you to put respect on his name.

It's a common retort for former and current players who feel their games or resumes are being slighted. Marion isn't the first nor the last player to make the request, but man was his version one of the more emotional ones we've gotten to date.

To be clear, I do not mean emotional as a pejorative.

During a Twitter space on Tuesday night, Marion found himself on stage defending his own honor. Comments about his shooting form, admittedly a wonky one, put him on the defensive. He felt the shots at his form were unfairly discounting the overall impact he had during his playing career.

And he let the people know about it. Put your headphones in if you're at work, or around children.

There are some bad words in there [shivers], but the heart of his message is absolutely correct. Let's get to the key notes, shall we?

Marion has a point. There were, and are, plenty of unique jumpers in the league. He shot from his chest; Kevin Martin shot from his hip like he was pulling a gun from a holster. If it goes in, it goes in.

That isn't a ton of volume when looking at things through the context of today's league, but considering the league average for three-point attempts was a shade under 15 attempts per team (and around 35%) during that stretch, Marion held his own in that regard.

There's some minor fact-checking needed, but again, the heart of Marion's argument is correct.

That's wild box-score production and an even wilder workload, especially when you consider how fast (relative to the rest of the league) the Phoenix Suns were playing, and the defensive assignments he was tasked with as their best/most versative defender.

Marion made four All-Star games and two All-NBA teams (third-team selections in '04-05 and '05-06) during that stretch. It's hard to overstate how unlucky Marion was in terms of award selections.

Think about the forwards he was up against. Pantheon guys like Tim Duncan, Kevin Garnett, Dirk Nowitzki. Drop it a tier, and you still have Paul Pierce, Chris Webber at the peak of his powers, Tracy McGrady or Vince Carter depending on their positional designations and Ron Artest (we don't talk about his peak enough). Towards the end of the run, you're adding LeBron James to the mix.

Marion not having an All-Defensive team on his resume says nothing about him — the stocks (steals and blocks) are eye-opening, but he legitimately could defend 1-through-4 while being an absolute menace as a weak-side helper — and more about the era he played in.

Here are some clips of older, post-title Marion on defense. Look at the range of players and responsibilities he has to deal with. Now, imagine this with even more athleticism.

Again, All-Defensive teams for Marion meant being one of the four best defenders at forward. You could pencil in Duncan and Garnett. Then there's Artest, Andrei Kirilenko and Bruce Bowen to contend with (among others).

Don't let the lack of team selections fool you: Marion was one of the best defenders of the generation.

Marion doesn't have the highest winning percentage in Suns history (.611), though it does rank sixth among players who have played at least 500 games of the franchise. That kind of win rate shouldn't be sneezed at.

He does rank in the top five in total minutes (second), points (fourth), rebounds (second; first in offensive), steals (second), blocks (third) field goals made and attempted (third) and three-pointers made (fifth, though ninth-place Mikal Bridges could catch him in a year or two).

To the adjusting-his-game portion, he's got a point there too. What made Marion unique was that he could give you buckets without dominated the ball. He got busy in transition, was a timely cutter, lit teams up on the offensive glass, could get busy as the roll/slip man in pick-and-roll and had the aforementioned stretch where he shot well from deep.

Marion's importance ranged from second to fifth on that team depending on who you ask — especially when Caron Butler was lost for the year — but the Mavs surely wouldn't have won that title without him.

Let's stop sleeping on Marion, please. The jumper was funky, but he was a star in his own right during his peak.

Heck, teams are looking for Marion-esque players now; 6-foot-7 wings who can fill gaps offensively and defend all over the place are among the most valuable archetypes in basketball.

As Marion said, he left quite an imprint on this game.