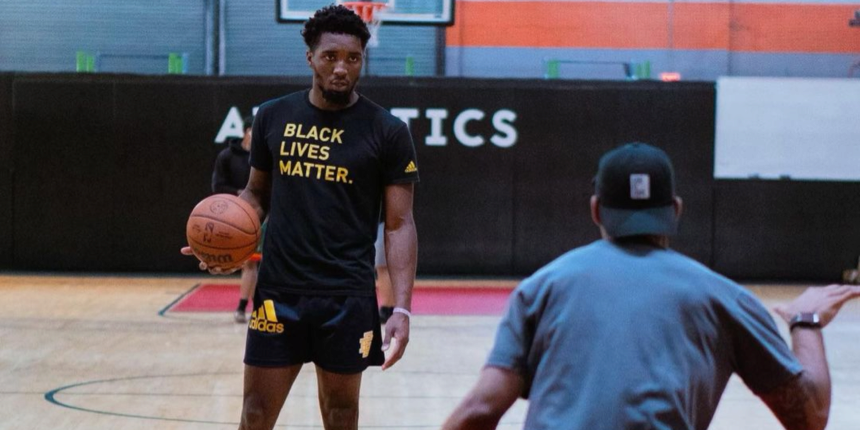 Chris Brickley trains some of the world's greatest basketball players, including James Harden, Kevin Durant and Cade Cunningham, to name just a few of the notable stars on his list of current clientele.

However, last week, Brickley set aside some time and teamed up with BODYARMOR to host a hoops clinic for local Harlem-area kids at the Madison Square Boys and Girls Club at the corner of Bradhurst Ave and 155th Street, just a block away from the famed Rucker Park.

After the clinic, BasketballNews.com caught up with Brickley to talk about one of his most valued clients, Utah Jazz All-Star Donovan Mitchell, discussing how the trainer and the hooper plan to prepare for the 2021-22 NBA season.

Is there one particular skill, or a couple of drills, that you will primarily focus on with Donovan Mitchell this summer?

Chris Brickley: "Basically, there's always been stages. So when I first started working with him before his freshman year of college, it was one thing. Then, we moved on to another thing. Now, he's kind of figured out how he gets his baskets in the league. He's figured out his niche. So what we do is work on his strengths, but we also want to improve his three-point shot off-the-dribble and off-the-catch. He already has a few go-to moves, but we want to add a few more. And being able to finish around the rim, with floaters and runners, is such a big part of his game, so we want to perfect those also."

Both of you have Louisville ties. Have you had a relationship with Mitchell since college? Is that when you guys first started working together?

Brickley: "Actually, when I was an assistant coach under Rick Pitino for the Puerto Rican national team, we held training camp at the University of Louisville in the summer. That year, Mitchell was an incoming freshman, so we started getting work in then, and that was almost six years ago. We've had a really close relationship for a lot of years, so it's been cool to watch him develop into a superstar.

Considering he was the 13th overall pick in the draft, were you surprised by how productive he was as soon as he set foot on an NBA court as a rookie averaging 20 points a night? Or were you confident he could make an impact right away?

Brickley: "To be honest, I always knew. Even after his freshman year at Louisville when he didn't play much, I'd be working him out, and he was a knockdown shooter. He understands pace; he's a super athlete. His worth ethic is on 1,000. He's just one of those guys. He has that "it." So, I've always known it, and I've always known that once he got an opportunity to show it, he would show it."

Some players prefer to rest and recover during the offseason instead of working out multiple times a day. Is Mitchell one of those guys who needs the summer to have his body recuperate, or is he one of those players that you have to lock out of the gym?

Brickley: "When we started off, he was one of those guys you had to lock out of the gym. His first year or two in the league, those offseasons were ridiculous. He was the only player I worked with that would start at 5 a.m. We'd go at 5 a.m. and go again at 2 p.m. And they were the most strenuous workouts. The guy pushes like no other. He's still really young, but he's had some injuries this past season, so it's important to get his body right. He's doing a good job with [DBC Fitness owner] David Alexander down in Miami, getting his body where he wants to get it."

Among the many ways in which Mitchell has improved his game since entering the league, what aspect has impressed you the most?

Brickley: "His efficiency and his professionalism. The guy almost got Rookie of the Year, won the dunk contest and became like a star after his first year. Yet going into his workouts, he would still be 15 minutes early; he'd be super punctual, super professional. Then, he became an All-Star and came back the same way. He hasn't changed. That alone is a skill, for any human — being humble. On the court, every year, he's averaged more points, and he's been more efficient. I'm proud of him for that."

This past season, Mitchell averaged over 5 assists per game for the first time in his career. Are there specific drills you can work on to improve a player's passing ability, court vision or basketball IQ? Or are those innate skills players are born with?

Brickley: "I think watching film is such a big trend in the NBA because that's one way you can improve your IQ. I think the best way you can improve your IQ is by watching yourself play games so that you can see, 'Ah, this worked. This didn't work.' I know Donovan is huge on film study. Whenever he's traveling, he's watching film. He watches film almost every night. He's a giant film guy."

Mitchell has been a remarkably productive player during the regular season, but has somehow managed to take his game to an even higher level during the playoffs throughout his career. It's exceptionally uncommon for a player to increase his scoring average and efficiency substantially during the postseason. What do you attribute that to?

Brickley: "I think taking care of his body and, literally, staying hydrated. He has a BODYARMOR partnership [too]. He is doing the recovery stuff, and it shows he's not messing around. He plays in his games, and then he uses his recovery tools… Stuff like that is really important. And that's why he is able to last so long into the season."