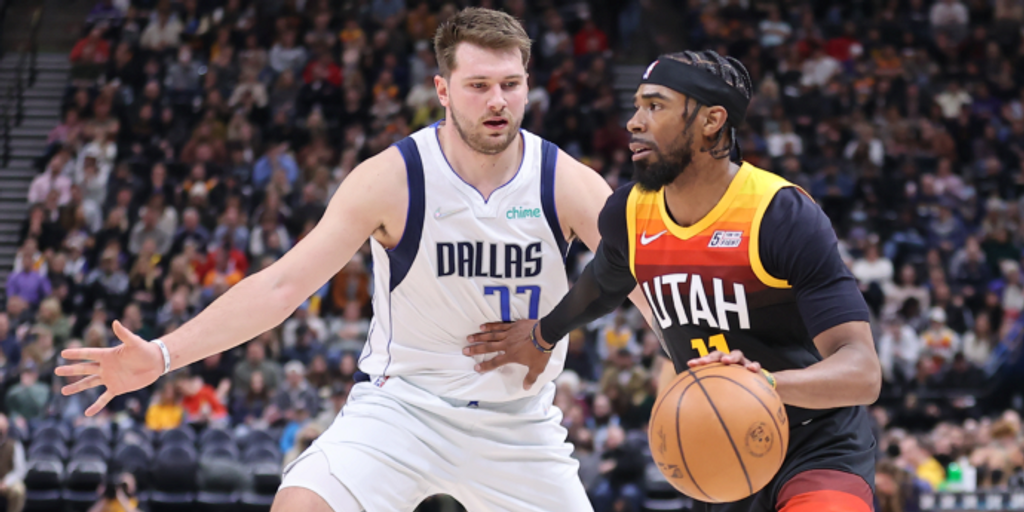 The second domino in Utah has finally fallen.

After trading All-World center Rudy Gobert to the Minnesota Timberwolves for a league-shifting pick package, the Jazz followed suit by trading star guard Donovan Mitchell to the Cleveland Cavaliers. Three unprotected first-round picks, two unprotected pick swaps and a multi-player package headlined by Collin Sexton was enough for the team to officially set off its rebuild.

The stars are gone, but there are vets still on the roster. Per ESPN's Adrian Wojnarowski, the Jazz aren't opposed to moving them if they're given more picks, young players or (ideally) both.

Chief among those vets is point guard Mike Conley.

Conley is coming off one of his healthier campaigns, appearing in 70 games (72) for the first time since the 2018-19 season. Conley was steady, averaging 13.7 points and 5.3 assists (1.7 turnovers) while posting a 57.2% True Shooting percentage. He oscillated between diagnosing defenses as a pick-and-roll threat and spreading the floor for Mitchell to attack.

Coinciding with Mitchell's ascension, he's become more of a spacer than a focal point over the past two seasons. Conley's three-point rate — the percentage of shot attempts that come from deep — has hit career-high levels over the past two seasons (52.3). He's drained 41% of his threes on 6.1 attempts per game during that stretch; only three other players — Anfernee Simons, Zach LaVine and some Steph Curry guy — have hit 40% of their threes on 6 or more attempts on average (min. 100 games).

Don't let the off-ball focus fool you: Conley's blend of pull-up shooting, court vision and ambidexterity still makes him a valuable playmaker. Over the past two seasons, possessions featuring a Conley-led ball screen has generated 1.03 points per possession (PPP), a mark sandwiched between Damian Lillard (1.032 PPP) and James Harden (1.023 PPP).

Even at this stage, playing drop coverage against Conley is a mistake.

Because Conley doesn't have the same burst anymore, he doesn't get two feet in the paint very often. His rim rate — the percentage of shot attempts coming inside of 3 feet — has dropped in each of the past five seasons. Only 7.5% of his attempts came at the rim last year, easily a career low.

He's been able to counter that by sprinkling in short pull-ups and floaters with either hand, but the threshold for bending defenses with those shots is pretty high.

Conley remains sound defensively. He's dutiful when navigating screens and still does a good job of reconnecting with ball-handlers. This might be my favorite stat find of the summer: Per Second Spectrum, among 165 players that defended at least 300 drives last season, only one player — Chicago Bulls rookie Ayo Dosunmu (13.97%) — was "blown by" at a lower rate than Conley (14.18%).

There's context to be added, like who Conley was directly matched up with, but that's a "he's typically in the right spot" stat if I've seen one.

Of course, Conley isn't perfect. There's only so much he can do as a shot-contester, even against his position, because of his size. While he's still a good screen navigator, his recovery speed isn't what it once was. If a screen nails him, you could be in some trouble.

Overall, Conley is still a good starting point guard with a game that can complement a high-usage star. If the Jazz are truly open to moving him, teams should come calling.

With a vet like Conley, finding a contending team for him is the likely priority. That makes trade talks tough since so many of the top teams either have (All-) star point guards already (Golden State, Phoenix, Milwaukee, etc.), younger players they're already invested in (Philadelphia, Denver), or vets they're okay with (Miami, Boston).

The Dallas Mavericks may be the most realistic suitor within this lens. Conley could certainly slot into the Jalen Brunson-sized void that was opened this summer. Tim Hardaway Jr.'s contract ($19.6 million in 2022-23) is enough to start the conversation, but you'd have to wonder if a middleground could be found from there.

The Mavericks owe a first round pick to the Knicks (top-10 protected through 2025) that you'd assume would convey this year, but that's off the table. Would the Mavericks be willing to throw in a later first-round pick instead? If not, is there a young piece on the roster (hello, Josh Green) that they'd be willing to sweeten the pot with in lieu of the pick? It's hard to gauge.

I'd be intrigued by a trade centered around a Conley-D'Angelo Russell swap if the Minnesota Timberwolves were game.

(I don't think I'd be game if I were them. It'd have to be Conley and another player or two — Rudy Gay and Nickeil Alexander-Walker would get you there — since the Jazz are hard-capped. Beyond that, I'm sure they would've worked to include a Russell-Conley swap into the Gobert trade if there was real interest in that regard.)

There's been smoke, then fire, then smoke, then fog, then more smoke around Conley being featured in a trade with the Los Angeles Lakers for Russell Westbrook. Conley would certainly vibe alongside LeBron James and Anthony Davis; I just don't know how likely it is that Westbrook is traded at this point, even if it might be best for everyone involved.

If it's not contender-or-bust for Conley, there are a couple of lottery teams I'd like to see throw their hats in the ring for him.

Depending on how you feel about the Kevin Porter Jr. point guard experiment, something I had my eye on heading into last season, there could be room for a half-season of Conley stability in the starting backcourt. Having a consistently-good decision-maker alongside Jalen Green could foster easier development for him.

There are things Green (or Porter, for that matter) could learn from Conley. My mind immediately goes to how patient Conley is against drop, and how good he is at snaking ball-screens and bending defenses. Green showed growth as his rookie campaign went on, but there's still room for improvement.

There's even a number for it. Per Second Spectrum, the Rockets generated a little over 0.67 points per possession (PPP) on trips featuring a ball-screen that Green snaked.

Considering Eric Gordon's salary would likely be needed to make this work, a third team would make some sense here. An interesting framework would be sending Conley to Houston, Eric Gordon to New Orleans (I know, I know) and a combination of KJ Martin (if he still wants a trade from Houston), Kira Lewis and more salary filler to Utah.