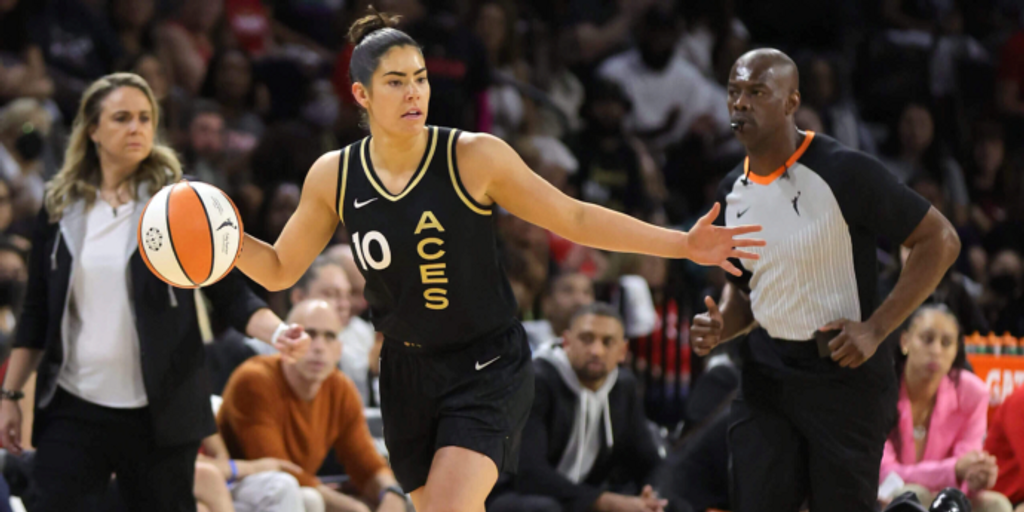 As head coach Becky Hammon calls out instructions for her players during a timeout, the desire for a three-pointer is repeated. The Las Vegas Aces, who have controlled things for most of the afternoon, find themselves down 89-85 with 11.3 seconds left in the game.

It would be easy to get lost in the "how" of the current situation. How a 15-point lead through the second quarter was suddenly a deficit in third. How Breanna Stewart, cold for most of the game, had hit three bleep-you shots in the past minute in a half to give the Seattle Storm a late-game edge.

There was no time for those thoughts though. The Aces needed a three, which means they needed to rely on Kelsey Plum.

You'd think the play was being called for Plum. She's one of the best shooters in the world, fresh off a season where she led the WNBA in three-pointers made (3.1 on average, 113 total) and doubled as one of five players to convert at least 40% of their threes while taking 5 or more attempts per game.

Instead of using her shooting ability, Hammon leveraged Plum's gravity and toughness to help pry open Riquna Williams — an unabashed gunner off the bench who'd made several big shots in the quarter.

"You're screening for A'ja [Wilson]," Hammon tells Plum before the players break the huddle.

"Jackie [Young] is ripping through. KP screens [for] A'ja; A'ja, come around and screen for Bay (Riquna Williams)."

Sure enough, the Aces execute the play perfectly.

Young cuts through the middle of the floor and relocates to the right corner. Plum sets a solid screen on Ezi Magbegor. Stephanie Talbot, Plum's defender, is caught in a bind. She doesn't want to switch onto Wilson for obvious size and skill reasons, leaving a gap. Thanks to the Wilson screen on Sue Bird, Williams is able to run into that gap and fire up an uncontested three-pointer.

From that point on, madness ensued.

Tina Charles missed a pair of free throws. Wilson gave the Aces a lead with a tough drive, though it's hard to look past the missed travel call. Bird nearly rendered the discussion moot by draining a go-ahead three with 0.8 seconds remaining. The Aces countered by drawing up a play for Young, who converted a layup over the outstretched — well, the not-stretched — arms of Magbegor to send the game into overtime.

The Aces would outscore the Storm by 12 in the overtime period to snag a 2-1 series lead.

If I can re-center the conversation on Plum, it's worth putting more spotlight on her. She's fallen by the wayside in a sense, though it's somewhat understandable due to the historic performances that Wilson and Gray are in the midst of.

Plum hasn't been at her regular season level; her per-game and efficiency numbers are slightly down. It's important to note that it hasn't shifted the way she's been defended. She's carefully watched off the ball, and occasionally trapped when she has it.

Despite her shot not falling at an elite clip right now, she's remained impactful because of her gravity. And as the play above showed, she hasn't been afraid to get her hands dirty when necessary.

The fun part? The rugged screening we saw from Plum in this game isn't a new development. It's been an under-the-radar staple of the Aces' half-court offense. I don't think it's hyperbole to call Plum one of The W's best screeners, regardless of position.

It would appear that Plum agrees.

"I feel like you see me," Plum told Basketball News with a laugh when asked about her screening after practice on Saturday.

When asked if there was a coach that pushed her to grow as a screener, she pinpointed former Aces head coach — and Detroit Pistons Bad Boy — Bill Laimbeer as an influence.

"Honestly, I learned that from Bill," Plum said. "We did a lot of block-to-block screens, so I was setting more Flex screens. Becky has me setting more back screens and cross screens."

We'll take a brief pause here to showcase some examples. Plum has done a tremendous job of prying her teammates open, from a variety of angles.

Plum doesn't go half-speed when she's asked to screen someone open. She relishes the contact, and manages to toe that line without committing fouls that often.

"I know, especially with Seattle, they're gonna stay on me. If I can give A'ja just a second, I really try to [make contact]. My family played football, so I feel like I have a little of that in me."

Plum likened herself to a linebacker trying to thump a ball carrier; I may lean more towards a fullback with the duality of lead blocking or slipping out and becoming a threat herself.

The Aces now find themselves in the red zone, if we want to carry the cross-sport comparison forward. With a 2-1 lead heading into Tuesday night's Game 4, they now have a pair of shots to punch their ticket to the WNBA Finals.

Following their overtime thriller, the momentum is certainly on the Aces' side right now.