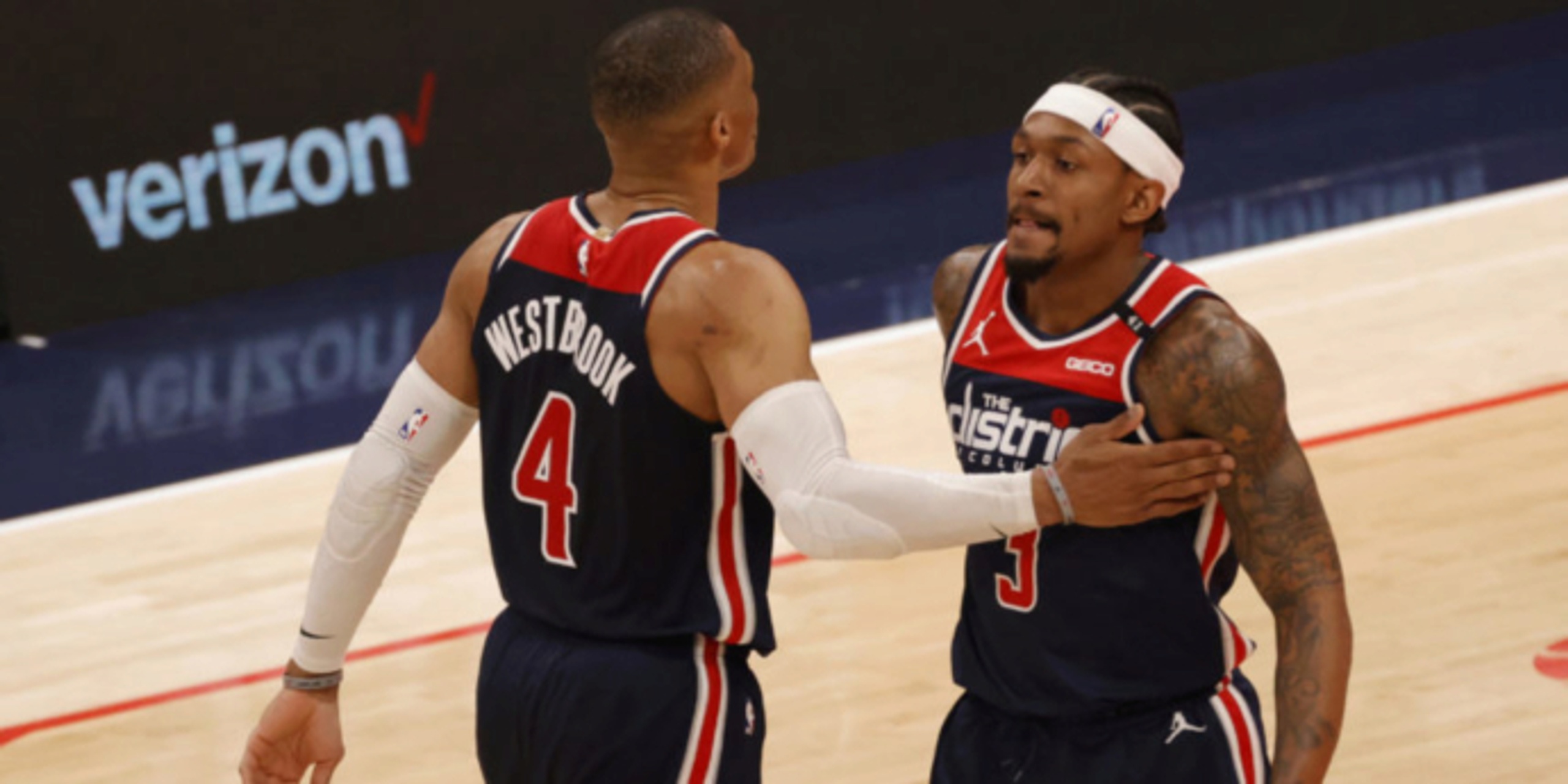 A proposition: What if you were offered 250-1 odds on a team that has led the NBA in points per game and field goal percentage since April 7? Not only that, but they have the NBA's all-time leader in triple-doubles playing alongside an All-Star who is second in the league in scoring.

Would you wager at those odds?

That team is the Washington Wizards, who clinched no less than 10th place in the Eastern Conference on Friday night by defeating the Cleveland Cavaliers, 120-105. Russell Westbrook had 21 points, 17 assists and 12 rebounds for his 183rd career triple-double and league-leading 37th this season, joining Hall-of-Famers John Stockton and Isiah Thomas as the only players with at least 15 assists in seven consecutive games in NBA history.

Nobody gives Washington much of a chance of winning a title, especially the sports books in the legalized U.S. sports gambling marketplace. That is why they are 250-1 at FanDuel and DraftKings, with FanDuel listing them at 120-1 to win the East. PointsBet has the Wizards at the same odds, listing the Hornets and Grizzlies at higher odds (500-1) and the Pacers and Spurs at 1000-1.

But Washington is 16-6 since April 7, having rebounded quite strongly from a start to the season that was impacted more than most teams by coronavirus infections. The Wizards were 15 games below .500 prior to that stretch, but Westbrook has been a beast with 311 of the team’s 609 assists during the team's 16-6 streak.

"I've been in the league a long time and when you're 15 games under .500 you're thinking, ‘Where are we going on vacation?'" coach Scott Brooks said.

Washington, currently in a three-way tie with Indiana and Charlotte for the No. 8 seed, improved to 33-38 after snapping a two-game losing streak Friday night. Washington, which hosts the Hornets on the final day of the season Sunday, can still finish anywhere between No. 8 and 10. All that is known for sure is that the Wizards will be playing some place Tuesday night, along with the Boston Celtics, who will be at home.

Those one-and-done play-in games will have captivated audiences, as will the second round of elimination games on Thursday and Friday.

Whether it is the Wizards in the East or the Blazers, Lakers, Warriors, Grizzlies or Spurs from the West, odds are going to come down – except in the case of the Lakers, who remain the second choice to win the title behind Brooklyn at odds of 5-1.

Let’s not forget that the Miami Heat were 10-1 to win the East when last year’s playoffs began in the bubble, with people largely ignoring the fact that they had defeated the Milwaukee Bucks handily twice during the 2019-20 regular season.

The Wizards can still get a No. 7 seed and a matchup with Brooklyn or Milwaukee if they finish the regular season in eighth and win their play-in tournament game. If they lose Sunday to Charlotte, that would mean either a finish in ninth or 10th, meaning Washington would have to win twice to earn the No. 8 seed for a date with the Sixers. Nothing will be known until Sunday’s games are played, but Philly swept the season series 3-0, overcoming Beal’s 60-point outing back on Jan. 6. In the most recent meeting between the teams on March 12, Washington fell behind 32-15 after one quarter and got trounced by 26 points.

The Wizards went 2-1 vs. Brooklyn and 0-3 against Milwaukee.

But with the exception of a one-point loss at Milwaukee on May 5, all of those aforementioned losses to the Nets, Sixers and Bucks transpired prior to the recent hot streak. And as we have all learned over the years, what matters most in the NBA playoffs is whether you enter with a head of steam and with a healthy roster. Beal has been out for three consecutive games with a hamstring strain. It is unknown whether he will be available Sunday.

FanDuel spokesman Kevin Hennessy said the largest wager the book had received on the Wizards to win the NBA title was $100 – a pittance in that multi-billion-dollar industry. The books have taken a ton of action on the Nets, Sixers, Lakers and Clippers, and the championship odds are more of a reflection of that reality than an accurate gauge of who has the best chance to win the title. That is why we are seeing the team with the shoo-in MVP, the Denver Nuggets, still being listed at 35-1. Portland, which is one victory away from locking down no worse than the No. 6 seed, is even higher at 80-1.

Most of the postseason awards are going to go down as runaways, with the exception of Coach of the Year, which many of the big books are not accepting bets on. One exception is FoxBet, which has it as a four-man race:  Monty Williams of Phoenix is the favorite at -176, Tom Thibodeau of New York and Quin Snyder of Utah are both +200 and Doc Rivers is 12-1.

“The end of the NBA season is approaching and there are clear favorites to win each of the awards. NBA MVP is the most bet prop and Nikola Jokic winning the award would be a good outcome for the sports book,” said Seamus Magee, head sports trader at BetMGM.com.

Here is where BetMGM’s awards lines have gone:

Rookie of the Year – LaMelo Ball