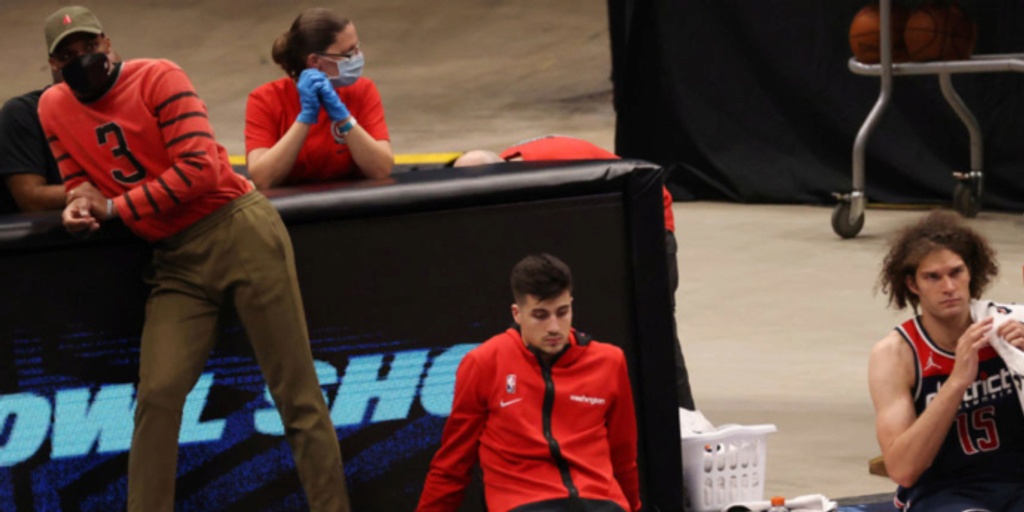 Wizards fighting boredom through postponements while idle on sidelines

Bradley Beal, the NBA’s leading scorer, has been sitting idle for the past 10 days. Russell Westbrook has been out even longer, at 13 days and counting. Deni Avdija is not making the highlight reels back in Israel because all he is doing these days is killing time.

Of the 30 NBA organizations, the Washington Wizards are the biggest victims of the coronavirus pandemic, and you will have to forgive them if they are bored. The invisible enemy that the world is fighting has hit them harder than any NBA team, and they will not play again until Sunday – but only if they can put together a roster of eight healthy players.

Washington’s scheduled game at Milwaukee for Friday night has already been postponed, making it six-straight games that have been put off until a later date. Head coach Scott Brooks did not even have enough players to hold a five-on-five scrimmage yesterday, as Westbrook and Thomas Bryant are out with injuries and Avdija, Dāvis Bertans, Troy Brown Jr., Rui Hachimura, Ish Smith and Moe Wagner are sidelined due to health-and-safety protocols.

Those latter six are not expected to travel with the team when (if?) they depart for the final three stops of a four-game road trip – Sunday at San Antonio, Tuesday at Houston and Wednesday at New Orleans.

🎥 Felt good to be back on the court! 🎥 pic.twitter.com/pZNYLxXoUK

Somewhere down the road, there is going to be a load management situation. For now, there is a boredom management situation. Washington has played only 11 games, and it's been more than two weeks since Beal dropped 60 points on the Sixers in a loss to Philadelphia. More bad news came today when the league postponed the Memphis Grizzlies' next three games.

Some games will likely be made up over what would have been All-Star Weekend, Feb. 12-14. (The new All-Star break will be from March 5-10, but the festivities have been cancelled). And because of the rash of postponements, some teams will be particularly busy during the second half of the season, which is March 11 through May 16. The league released only the first half of the schedule when planning for this season, and the second-half schedule continues to evolve as events beyond anyone’s control force everyone to think on the fly.

“For a team with a lot of postponed games, we might have to find other openings, but generally the second half of the schedule is the place,” league spokesman Tim Frank said.

Washington has the East’s best offense (120.5 points per game) and worst defense (121.3 points allowed per game), and the NBA’s worst luck when it comes to avoiding particularly contagious viruses. Friday’s game was postponed after Beal, the Wizards' player union rep, expressed concern that the team’s conditioning was less than optimal after so much time – nine days – without practice.

“I hope guys are home doing push-ups and sit-ups and not just playing 2K,” Brooks quipped.

Gallows humor is a survival technique that the Wizards, like everyone else trying to keep a cool head, are employing to deal with the effects of the pandemic. Everyone who has a daily planner with lines crossed through it can empathize.

“It kind of feels a little bit like an extra All-Star break, except everyone else is playing,” center Robin Lopez said. “We’re just trying to keep everybody engaged right now.”

The Wizards made do Thursday by having players defending positions that they would not usually defend. Beal, for instance, played small forward, and Brooks said Westbrook showed discernable progress after working through a left quad injury.

“It’s real,” Brooks said of the pandemic. “4,200 people passed away yesterday, and every one of those people had a story, a journey. Our country has to do this together; we can’t do it separately. We’ve got to do it together, we’ve got to be united."

The Memphis postponements were caused by “unavailable players for the Grizzlies and contact tracing for other players on their roster,” the NBA said in a statement.

A total of 20 games have now been postponed. Of the 502 players tested for COVID-19 since Jan. 13, 11 new players have returned confirmed positive tests, the NBA announced on Wednesday.

“I’m just happy we have the best commissioner in all of sports,” Brooks said.