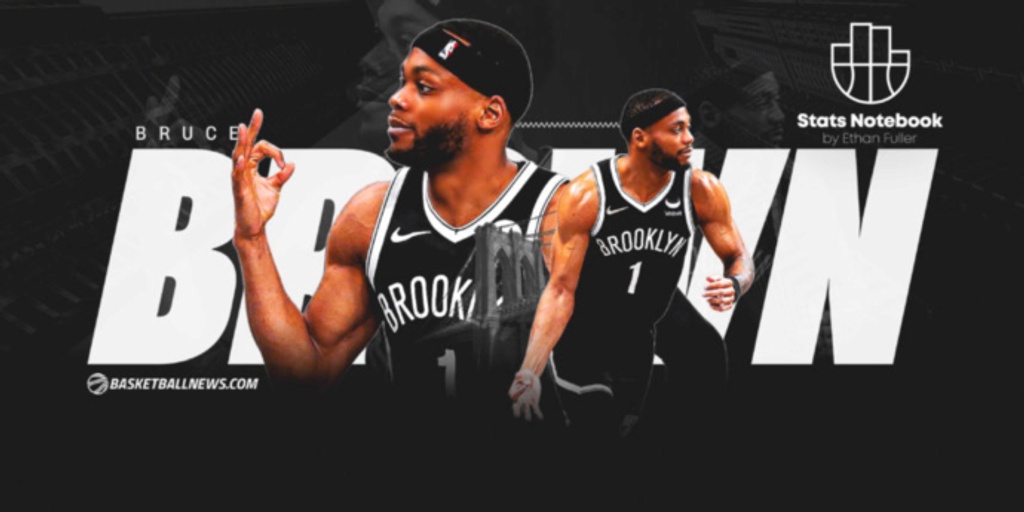 The Bruce Brown puzzle starts with trying to pin down his position.

Basketball Reference lists Brown as a point guard, shooting guard and small forward. The BBall Index labels him as a small forward on offense, a point guard on defense, and a big for his advanced position. The NBA plays it safe by calling him a guard-forward. Cleaning the Glass has described him as a forward, wing and combo guard. Steve Nash has been quoted considering Brown possibly as a center.

While the merits of position labels are a separate conversation, the point is: If you want to find a truly "positionless" NBA player, you won't do much better than Brown.

The 25-year-old shifts fluidly between roles on a Brooklyn Nets team that has struggled dealing with change this season. Now, as the squad appears to be heating up, Brown is clicking as the textbook glue guy that any playoff contender would love to have. Since the All-Star break, he's averaging 14.3 points, 6.2 rebounds, 3.7 assists and 1.5 steals per game, shooting 40.7% from three-point range with a 58.3% overall True Shooting percentage.

Brown is breaking out the full bag as an initiator and connective passer, a multi-faceted off-ball player and a primary defender. But a peek at the numbers also opens up more questions.

For example: Brown's at-rim scoring pressure is among the best from any non-big in the entire league. Over 45% of his shots have come within four feet of the basket in each of his four seasons and he's generally a solid finisher. His 65% clip at the rim this season is average among forwards.

So when I mosied on over to the Synergy playtype stats on the NBA's site, I was stunned to find that Brown has been by far one of the least efficient cutting scorers in the league this year. He's hit just 40.6% of his shot attempts off of halfcourt cuts; that's the worst among 105 players with at least 50 cutting possessions logged, and the closest player to him is Andre Drummond at 55.6%.

This does not mean Brown is a bad cutter.

I would argue after some cursory film study that he's generally excellent at timing his 45-cuts and weaving his way into space. Brown likes this right-hand jump floater but he doesn't always have the natural touch. According to InStat, he's made just 36.0% of his 114 floater attempts this season. Here's a reel with four great cuts and mixed floater results, plus two bonus cuts at the end:

Synergy playtype data is generally considered to be some of the more accurate out there, but it's still vulnerable to subjectivity and tracking noise. More importantly, the possessions included here (from my understanding) are only plays that end in a shot, turnover or foul. That removes some of Brown's best work as a connector.

Since the All-Star break, Brown has a 15.0% assist rate (80th percentile among forwards) and 6.6% turnover rate (81st percentile). He returned to the starting lineup on Feb. 12 and has committed multiple turnovers in a game just once during that span. Brown's combination of decisiveness and patience means defenders don't have a moment to spare when he gets the ball.

If help comes to ward off a drive, Brown knows who gets open. He's also capable of making the right reads and applying just enough pressure with the ball in his hands. Brown stays patient on these baseline drives and makes two great reads:

Brown is averaging 1.43 points per possession in transition and finishing 74% of his transition shot attempts, both among the best marks in the league. It's easier for him to get all the way to the rim in this context. Splitting hairs creates an interesting contrast: Brown is shooting 64.4% in the restricted area (not bad!) but 37.3% in the NBA's "In the Paint-Non-RA" zone (very bad!). Unsurprisingly, that's also the zone where he takes a lot of those hook-floater-type shots.

Being a 6-foot-5, 200-pound jack-of-all-trades means Brown can make the quick bursts we like to see and play with strength against smaller matchups. It also means he's going to have a tougher time finishing short touch shots associated with bigs because he's not a blow-by driver and, well, not exactly big.

However, the offensive impact drastically rises when Brown has the three-point shot going. His 40.7% clip since the break comes at triple the pre-All-Star volume. It's still on a relatively small 2.5 attempts per game, but this could signal some increased confidence, and Brown is generally solid from the charity stripe.

Defenses do not respect the shot. They don't usually close out hard on his shots (see the below film) and are generally unafraid to help off of him when he's in the corners. For Brown, it's simply about making the defenses pay by hitting these catch-and-shoot looks. He made just 32.5% of his catch-and-shoot threes before the All-Star break but is up to 41.7% since then.

A sweet-shooting Brown means more easy perimeter points for Brooklyn, more space to weaponize him as a driver and passer, and perhaps some extra freedom for the Nets' superior scorers to move around off the ball.

Brown will always be a necessary rotation piece for the Nets due to his defensive value. He's not going to reach the All-Defensive stratosphere, but he's a darn good defender on a team that simply needs darn good defenders. Brooklyn dumps a ton of responsibilities on their malleable stopper.

BBall Index has developed metrics for defensive-matchup difficulty, positional versatility and role versatility. Brown places in the top 15% for all three. His deflections (3.5) and steals (1.7) per 75 possessions both rank in the top 10%.

Brown can read passing lanes, navigate screens and use active hands to muck up plays. He doesn't get into a whole ton of foul trouble (2.4 per game) and it's worth the payoff for his energy.

On the most recent episode of The Dunker Spot, Steve Jones Jr. asked Nekias Duncan if Brown is currently the third-best player on the Brooklyn Nets. Right now, with most aspects of Brown's game clicking, I'm inclined to say yes. He's nowhere near the overall impact of a Draymond Green, but Brown boosts Brooklyn in ways akin to the Warriors star.

His shot ultimately determines his ceiling level of importance to the Nets in the postseason. If Brown can hit threes at even a middle ground between his pre and post-All-Star extremes, he threatens defenses and opens up the rest of his offensive game. If he can figure out that floater, he becomes lethal in space and off of cuts.

Brown possesses so many unique traits that defy most NBA-player archetypes. Now he just has to sync them all up in time for the playoffs.

Marcus Smart has made such a massive, necessary improvement in at-rim finishing this season.

Wendell Carter Jr. has been averaging 17/11/3 since the new year - and is doing so on a brand new shot diet of 3s and Drives. He's always flashed impressive shooting touch and ball skills for a big, now he's finally put it all together. pic.twitter.com/0SXZrCa2EF