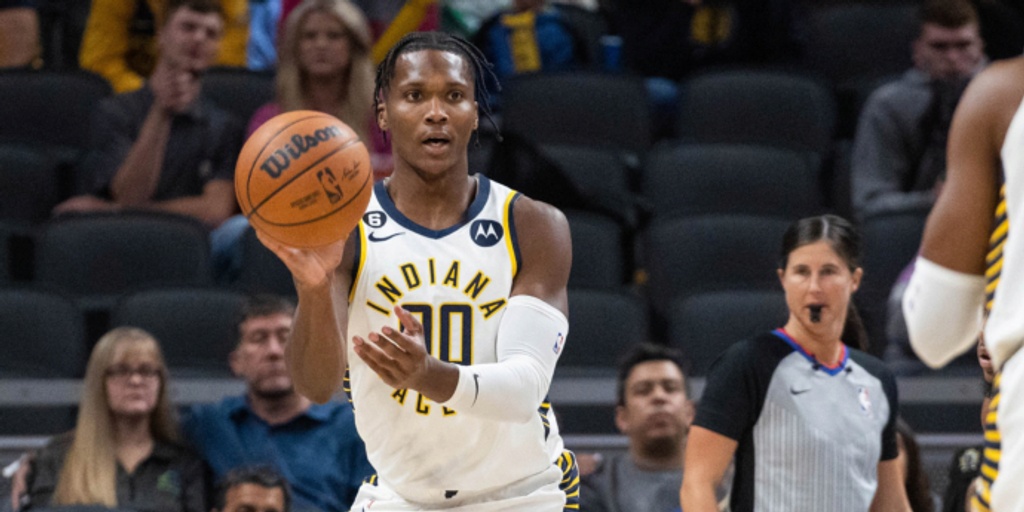 On Wednesday night, Bennedict Mathurin treated NBA fans to another highlight-reel performance by an inbound rookie.

The sixth overall pick in the 2022 NBA Draft dropped 27 points, shot 61% from the field and threw down this monster dunk for the Indiana Pacers in their preseason contest against the New York Knicks:

Mathurin is averaging 20.3 points in just over 22 minutes per game this preseason, ranking second in scoring among all rookies who have played multiple games. He's been a leading hype-getter over the past month, along with others like Houston Rockets forward Tari Eason (who I wrote about on Monday), Sacramento Kings swingman Keegan Murray and Detroit Pistons guard Jaden Ivey. As always, though, there's the asterisk that comes with a stellar showing in a contest that doesn't count.

So how well does preseason rookie stardom forecast the first year of production? Obviously, countless variables can change the environment for a player between the preseason and regular season. But past trends are always worth a peek and offer a historical look at a portion of the NBA calendar that always gets forgotten.

Per-game scoring has some of the highest weight in the All-Rookie race. Last year, the top five per-game scorers made up the All-Rookie First Team. In 2020-21, the first-team members included five of the top six scorers. Points shouldn't be the crux of the voting process (see Herb Jones getting snubbed from the First Team!!), but they are.

(Note: Exceptions were made for Zion Williamson and Joel Embiid, who landed on All-Rookie First Team despite playing well below 50 games. They are included in applicable categories.)

This table eschews some of the context that comes with the ups and downs of different rookie classes. For example, just four rookies averaged more than 9 points per game, and Steven Adams averaged 3.3 points and managed to land on the All-Rookie Second Team... yeesh. Cade Cunningham probably would have been a preseason top scorer if he wasn't hurt, and the same could be said for Jabari Parker's 2014-15 regular season had he not torn his ACL.

Still, the general theme appears to be that preseason bucket-getters can signal regular-season success, but it's not an automatic transition. And this makes sense — playing time is obviously different in the preseason, and roles that appear to be solid might dissolve. Jared Butler, Trey Murphy III and James Bouknight were all top-five preseason rookie scorers last year who scarcely played in the regular season (though Murphy caught on late).

That being said, it's significant that Eason and Mathurin have thrived at their current level. They're both putting up over 30 points per 36 minutes, which is ridiculous given their sizeable preseason roles. Williamson is the only other qualifying rookie in the last 10 years to clear such a threshold while averaging more than 20 minutes per game. Let me go find the wide-eyed emoji.

Playing time, ultimately, is perhaps the trickiest puzzle to solve with preseason. Eason and Mathurin should have room to play through mistakes on teams in rebuilding situations. But what about some of the less emphatic rookie standouts?

It's a boring takeaway, but here's my final thought: Remember that it's the preseason, and the jump to games that matter gets bumpy fast. But be cautiously excited about your favorite rookie. It's healthy to enjoy fun basketball. As interesting as it is to look back at history, every young player faces their own unique set of obstacles on the pathway to success.

Meanwhile, Rockets and Pacers fans — go wild. Even if the team scores are meaningless, Tari Eason and Bennedict Mathurin sure are awesome.

In Jerami Grant, Portland adds a versatile defensive chess piece, adept at limiting advantages on the ball and cleaning up as a help rim protector: pic.twitter.com/un8bilBhI5

Who might follow this career path next?
Pascal Siakam was super efficient as a slashing wing a few seasons ago but then he took on a more central role in Toronto's offense and his PPP hasn't fully recovered. Perhaps this is the year. pic.twitter.com/A4WlUBAmj5